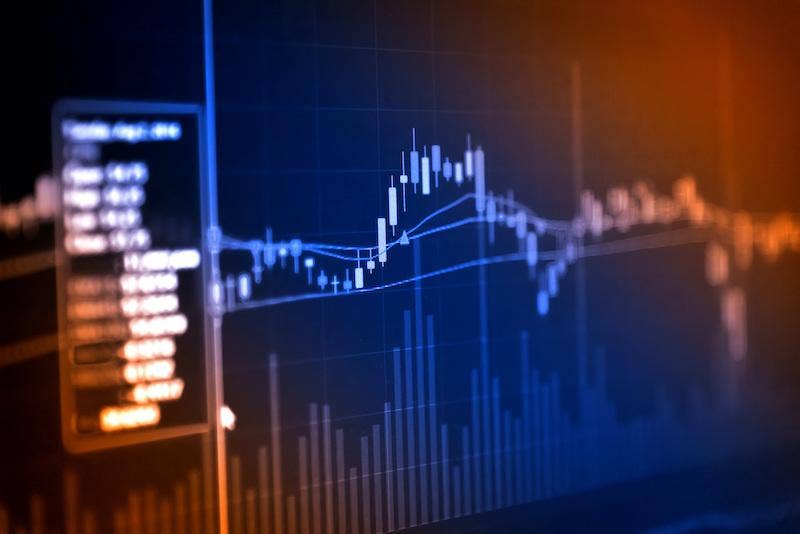 Once again, it was the "escalator up and elevator shaft down" for the COMEX digital metals. What does this mean for price moving forward and into the second half of 2021?

First off, we should address what happened and why the precious metals (and most all commodities) reacted as violently as they did last week after the June FOMC meeting.

In his press conference, Chairman Powell waved off the whole "dot plot" thing, and anyone with functioning brain cells should know that the notion of three additional Fed governors now expecting a fed funds rate hike in 18 months instead of 21 should not be a significant reason to upset the markets.

Instead, what spiked the Dollar Index and consequently crushed the precious metals was a simple increase of five basis points (0.05%) in the interest rate that the Fed pays on reverse reserves. Again, it was just five basis points, and this increase only took the rate from 0.00% to 0.05%. However, this was enough to drive a 50% jump in reverse repo activity at the Fed as banks and institutions immediately ramped up their already-record repo use from $500B/day to $755B/day on Thursday.

And it's not as if this small IOER rate hike was some sort of extreme event. Check the chart below for a little history of those reverse rates: 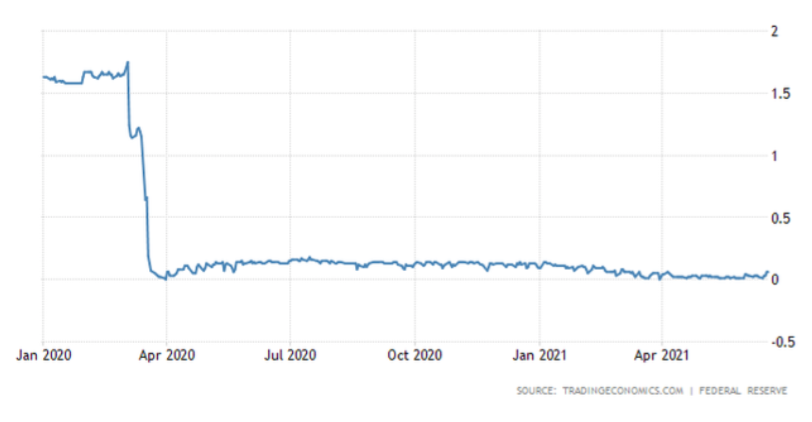 This seemingly simple move by the Fed was put in place to lessen downward pressure on very short term interest rates—pressure that had threatened to drive these short rates into negative territory. It accomplished that, but it also accomplished the establishment of a new perspective where many now believe that the Fed is openly and deliberately draining reserves from the banking system. Locking up $755B each day certainly does that, and many analysts now expect the reverse repo balance to grow to exceed $1T/day as soon as next week!

In the end, this small move by the Fed set off a massive short squeeze in the U.S. Dollar Index, and this measure of relative dollar strength surged by over 2% in just two days, as you can see below:

So the question becomes...was this move by the Fed intentional? Were the consequences expected or unexpected? So far, the Fed's beloved "stock market" doesn't seem to be bothered one bit by this perceived drawdown of liquidity. As you can see below, after its initial plunge, the "stock market" has recovered all of its losses as of Tuesday morning.

However, for the COMEX precious metals to begin to recover, a couple of non-Fed related things need to happen. First, this list of pending events needs to be successfully navigated. You can be certain that The Banks will be reluctant to allow price to rise through this period:

And then we're also going to need the Dollar Index to pull back. Fortunately, the index attained overbought levels not witnessed in several years when its daily Relative Strength Index (RSI) hit 73 late last week. Additionally, any sharp move such as what we just saw is almost invariably some sort of stop run—either sell stops to the downside or a short squeeze to the upside. As the index moved above both its 50-day and 200-day moving averages, no doubt many traders experienced a classic short squeeze that exacerbated the move higher.

And now the daily chart is pretty clear. A rally up through 92.40 sets the stage for a further extension to 93.40 and deeper pain for the COMEX metals. However, an overbought move back down below the 200-day moving average and 91.40 likely foreshadows a drop back under the 91 level and the 50-day moving average near 90.60. 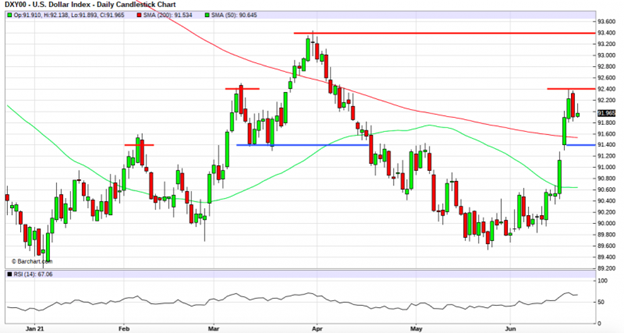 So let's give this a little time. The chart damage done to the COMEX metals was significant, and it will take a while to repair the wounds. However, the July-August timeframe is typically a strong seasonal period for both COMEX gold and silver, so a rally into late summer is not out of the question.

But we'll have to see where the Fed takes us from here. Real, inflation-adjusted interest rates remain sharply negative, and the Fed has successfully jawboned the actual, nominal yield on the all-important 10-year treasury note back under 1.50%. Perhaps the FOMC minutes in two weeks will provide some clarity?

In the end, though, while we took another elevator ride last week, the bullish picture for the precious metals and mining shares remains intact. The Fed must continue to monetize the ever-growing U.S. debt, and they must also foster an environment of negative real yields in order to manage that debt. These are both extremely positive, fundamental factors for both gold and silver, and every price drop—last week's shenanigans included—provides an opportunity to add physical metal to your stack.