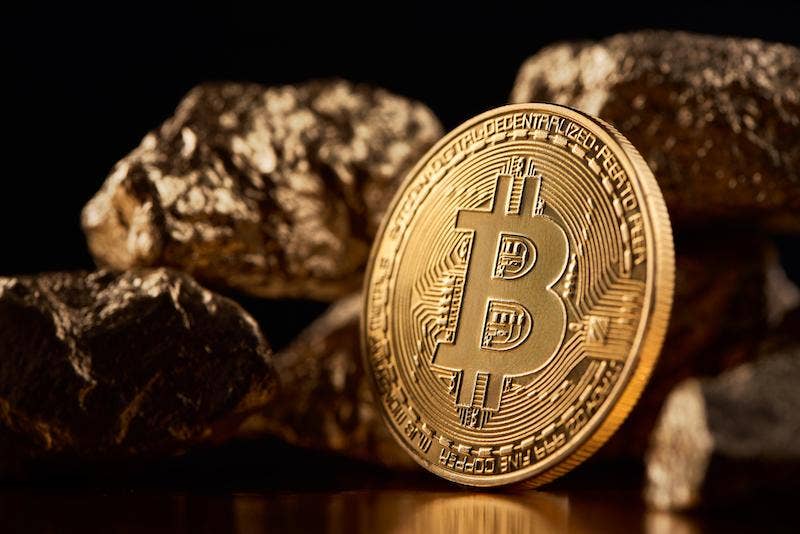 Let me begin this article by saying I hope I’m 100% wrong. I know I am going to get a lot of pushback on what I am about to share here, but please remember this is just my opinion. I would also add that my family owns a relatively small amount of Bitcoin just in case I am wrong. Lastly, despite my concerns about the long-term viability of Bitcoin, as long as we stay above $20k, the December 2017 peak, I still believe it could go to $100k or higher before it finally runs out of steam.

With that out of the way, let me begin with my primary concern about Bitcoin’s long-term viability, and indeed, all crypto currencies:

The source of central banks’ power is their total control of the world’s money supply. Do you honestly believe they're going to allow anyone or anything to undermine that total control? I don’t, and I’m not alone in that view. From an interview with former Dallas Fed member, Danielle DiMartino Booth in 2017:

Danielle: I would have to say no.”

I believe that Bitcoin and other cryptocurrencies have been promoted by the establishment to make digital currencies popular and widely accepted by everyone. This paves the way for abolition of physical paper currency and the introduction of Central Bank Digital Currencies, or CDBCs. Once those new CDBCs are in place and are universally accepted, they have no need for crypto currencies any longer.

Supporting this notion is the recent announcement by the Fed that they are exploring the idea of their own digital currency, or “Fedcoin”. The Chinese have already begun the introduction of their digital yuan. Russia is close to issuing its digital Ruble. Other central banks such as the Bank of England and the Bank of Canada are also exploring their own digital currencies. But what are they all saying about Bitcoin and other cryptocurrencies now?

“ECB’s Lagarde says ‘...they are not currencies, but speculative assets.’” - Bitcoin.Com

“The IRS has threatened to confiscate the crypto holdings of those who fail to pay their overdue taxes.” - Yahoo

“Beijing is reviving its distrust of cryptocurrencies. In 2017, it shut down domestic exchanges, but stopped short of making it illegal to own bitcoin and left miners alone. Now they too are being forced to shut down.” - Reuters

“The Royal Bank of India is informally urging lenders to cut ties with cryptocurrency exchanges and traders as the highly speculative market booms, despite a Supreme Court ruling that banks can work with the industry” - Reuters

“Bank of Canada Says Volatility is the Biggest Obstacle for Cryptocurrencies Acceptance as Payment.” - Economic Times

Sensing a theme here? Central banks and authorities around the world are already rattling their sabres with regard to Bitcoin and all cryptocurrencies. What happens when they roll out their own central bank digital currencies? We’ll know within the next 12 months, imho. What we do know now is that none of these central banks are buying Bitcoin, but they are buying or repatriating gold.

Then there is the question of volatility and Bitcoin’s ability to be a store of value. 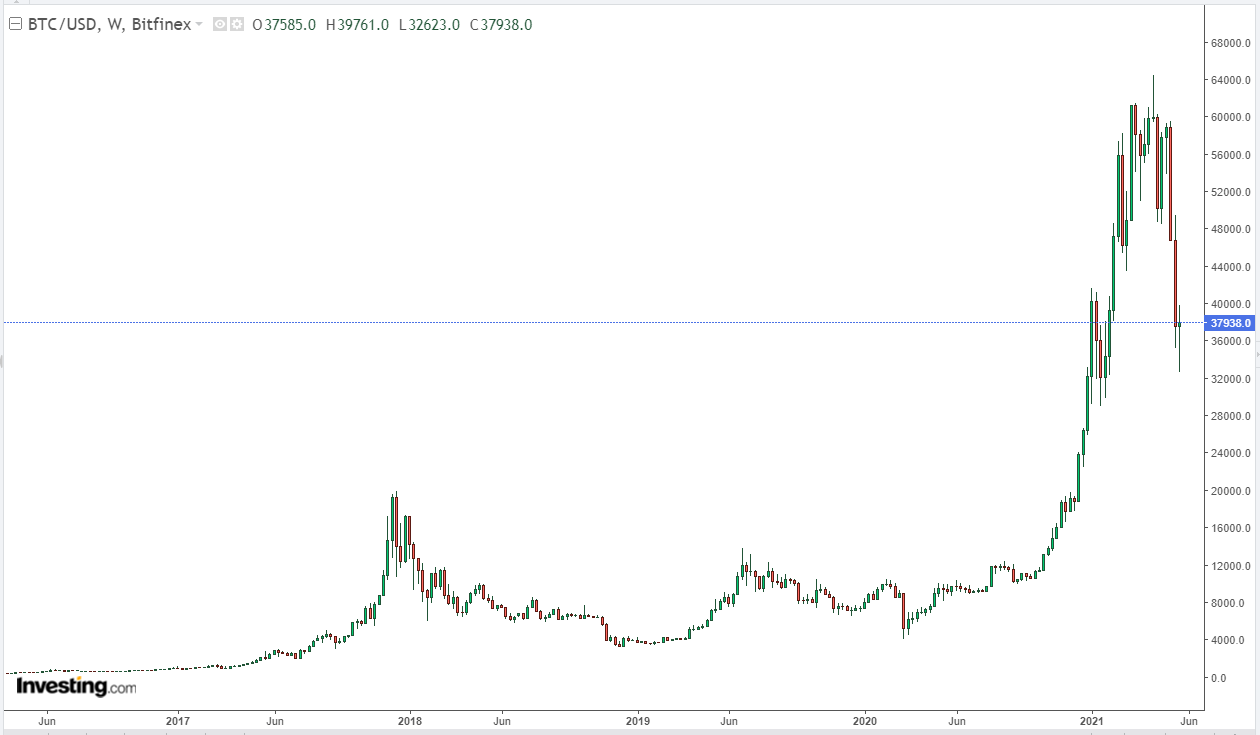 Suggesting that Bitcoin is volatile is perhaps the greatest understatement with regard to any asset. Extreme volatility is the antithesis of the “store of value” concept. When you consider that Bitcoin has the largest market capitalization of all of the cryptos, the assertion that cryptocurrencies as a whole provide a store of value is, to put it politely, highly questionable.

Turning back to the possibility that the governments, central banks, and corporations worldwide cooperate together to crush Bitcoin and all other cryptocurrencies, how would they do it? I see three principal avenues of attack. The first is making it illegal for use in any transactions. Corporations will not accept it as a form of payment. The second is taxes. Tax authorities across the world levy capital gains on all transactions of, say, 90%. The third being the shutdown of all crypto exchanges worldwide. If a few poorly chosen words from Elon Musk can trigger a >50% sell-off in weeks or the advent of futures in Bitcoin in December 2017, what do you think the above actions would do to cryptocurrencies?

Given the headlines from central banks around the world, it is no surprise that they are not buying cryptocurrencies. But what are they buying? Gold. They’re purchasing gold at a record pace. Many would argue that the central banks and their agencies—the commercial banks, such as JP Morgan—have been supressing the price of gold and silver for years. They are obviously not supressing cryptocurrencies “yet”. They are comfortable with retail investors owning Bitcoin, etc., but less so precious metals. Why? Perhaps it is because they are using cryptocurrencies to pave the way for the successful introduction of the CBDCs and that they plan to eliminate cryptos thereafter. Whereas gold and silver are the supreme forms of money since time immemorial and they own most of it. JP Morgan has one of, if not, the largest hoards of physical silver in the world. They don’t buy anything unless they expect to make a profit, typically a big one. If and when gold and silver explode higher, they stand to make billions, perhaps trillions. Follow the Smart Money.

As for the little guy like you and me, physical gold and silver provide a means for investment that cannot be tracked online, is truly outside the banking system, has no counterparty risk, and if minted, is acceptable as payment almost anywhere. It is also the ultimate store of value. The physical storage issue with respect to silver and the challenges with respect to transporting precious metals across the border pale in comparison to the advantages associated with the aforementioned benefits of physical metals and the upside ahead. These are still among the most, if not the most, undervalued assets in the world, and the Smart Money is loading up. Meanwhile, they’re already laying the groundwork for an assault on cryptocurrencies on a worldwide scale.

In conclusion, if you’re focused on trading gains in the next year or two, there is high probability of a move up to $100k or beyond in Bitcoin before all is said and done. Gains in other cryptocurrencies could be even greater. The problem is that sentiment in this sector is bordering on fanatical, with cryptobugs saying they believe in crypto so passionately they will never sell. That could end in disaster, especially for the many millionaires and billionaires in that space. Again, I hope I’m 100% wrong in this respect. Whereas, if you’re an investor for the long-term, there is no alternative to physical precious metals, imho. Gold rose over 60% in the 1930s as the prices of stocks and real estate crashed. You could buy an entire block with a one ounce gold coin. Gold rose 24x in the 1970s, silver 36x. Gold rose 8x in the 2000s. Silver jumped 12x. Follow the Smart Money. The rally in precious metals and miners has barely begun and will run for years, imho. Given the amount of currency printed out of thin air, if history is anything to go by, the gains will be enormous, especially in real terms.