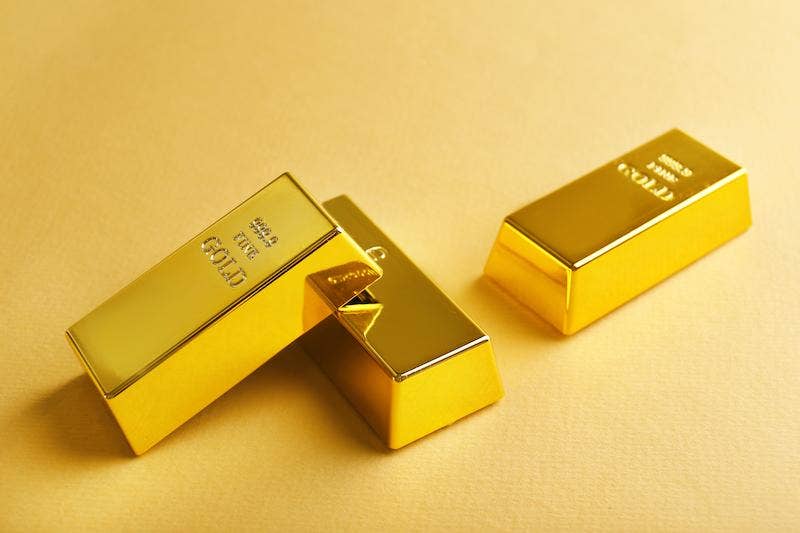 Timeframes matter when it comes to analysis and possible outcomes. What do I mean by timeframes? I’ll use Gold to explain, but this applies to all markets with the caveat that each analyst, trader, or investor has their own definitions of what these timeframes are. It’s not an exact science, but this will explain the concept of timeframes.

For example, I have been a screaming bull in precious metals and miners since I started buying them in the second half of 2015. My expectations for Gold long-term are for a ‘minimum’ price of $5,000 in the next few years and far higher after that. I have similar expectations for Silver and the miners, where I expect even greater percentage gains. Call me a Goldbug, a Silverbug, whatever. It’s a badge of honour, in my opinion, but it’s safe to say that I’m extremely bullish long-term.

Does this mean I can’t be bearish short- or medium-term? Of course not. Nothing goes up in a straight line, and as we’ve seen since the bottom in December 2015, we’ve had some huge reversals in Gold during that time. 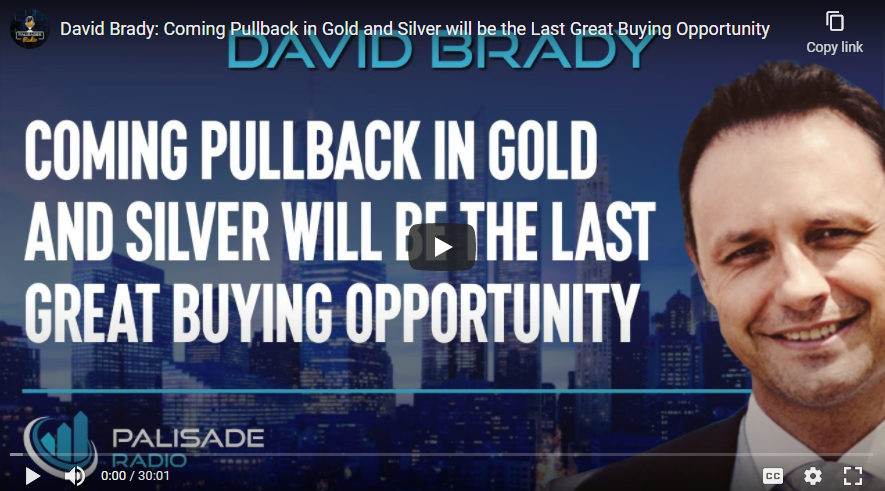 When I said in July 2020 that we would get a massive pullback beginning in August for multiple reasons, I was bearish medium-term (i.e., for the next few months from August onwards), as I specified in the interview. However, look at the headline above again and I’m clearly bullish long-term. So am I a bear or a bull? I’m clearly a Gold bull who was bearish in the medium term. This is called being objective, which my FIPEST process enables me to be. I focus on the data and eliminate emotion from my analysis; emotion is the curse of many who trade and invest in this sector. Sentiment is one of the most powerful tools in precious metals, because so many are so passionate about Gold and Silver that they let their emotions get the better of them at or near peaks and troughs, typically a sign that the market is about to turn the other way.

Of course, the same can be said in the opposite direction: 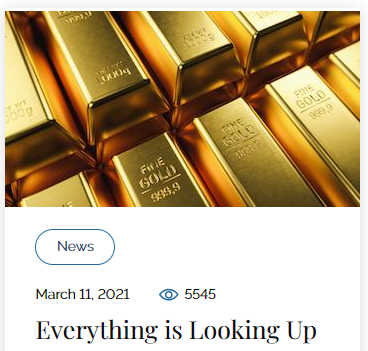 When everyone is bearish and markets are extreme oversold, it’s time to look up. In this case, I’m bullish short-term, medium-term, and long-term. But even then, I’ll point out the “risks” in the very short-term because, as I said, nothing goes up in a straight line. Does this mean I’m bearish? Obviously not. I’m simply stating that there is a risk that Gold falls in the next few hours or days before heading higher again. Why do I say “risk”? Because no one knows for sure where these markets are headed, especially in the very short-term. A risk is not a forecast, it’s a warning. In this case, it means don’t get shaken out if we do get a short-term pullback. Such reversals are a gift, because they provide greater fuel for the next leg higher.

Lastly, I am not a day trader. I’m a swing trader and investor. A swing trader waits patiently for major turns in the market and then takes positions either long or short that will be held for several weeks or months before the next major peak or troughs occur, such as those in March 2020, August 2020, and a month ago. I consider such a trading strategy far more profitable with a higher degree of success than trying to play the micro moves on a daily basis, but to each their own. Whereas the investments I made in physical Gold and Silver beginning in the second half of 2015 will gather dust for years.

The point being that I can be bearish short- and medium-term but bullish long-term. In my opinion, this means I’m a bull who can be objective. Timeframes matter when it comes to analysis, and the best analysts, traders, and investors can switch from bullish to bearish and back again based on the data. With that out of the way, what does the data say for metals and miners from here? 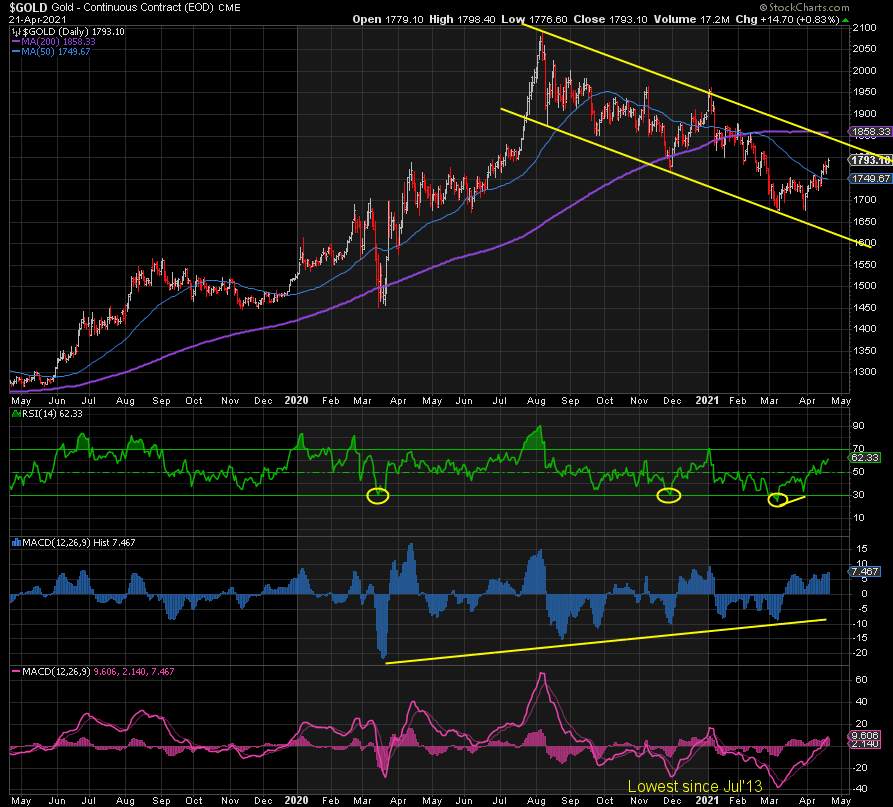 Straight off the bat: I am expecting new record highs in Gold this year. 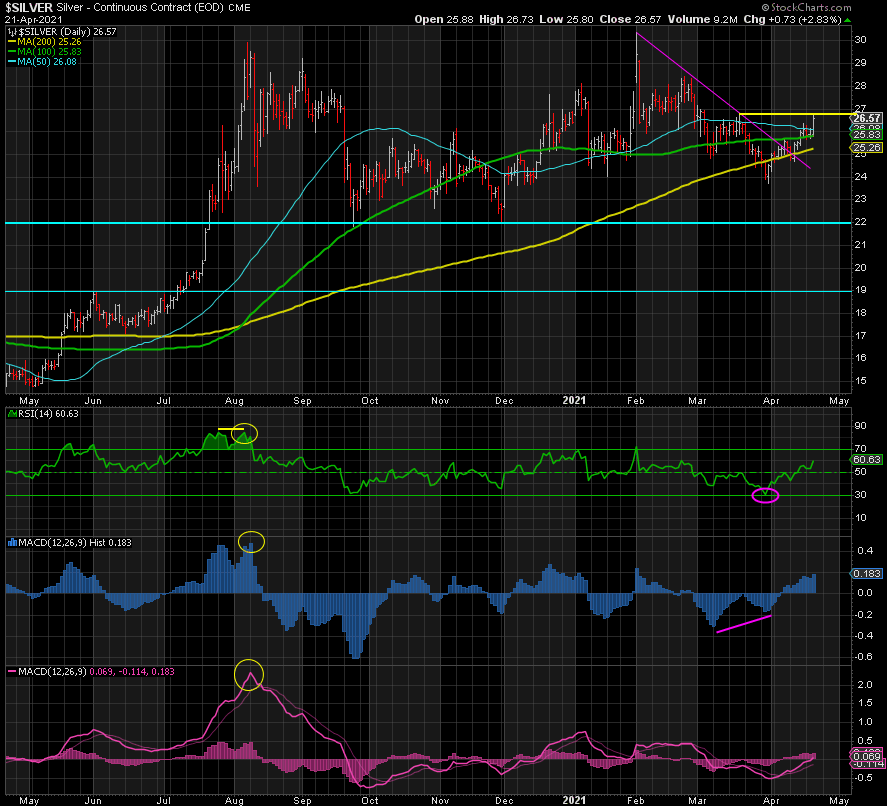 I am expecting new highs in Silver this year.

All guns are blazing in Silver. Its MACD Line has turned positive. The RSI continues to rise off its extreme oversold low of 30. It has broken its downtrend since the peak on February 1. But it has now run into resistance at its prior high of 26.74 back on March 18. It’s clearly reasonable to expect a pullback from here to 26 or 25.60 before heading higher again. Only a break of 24.68 opens up the possibility of lower lows again. 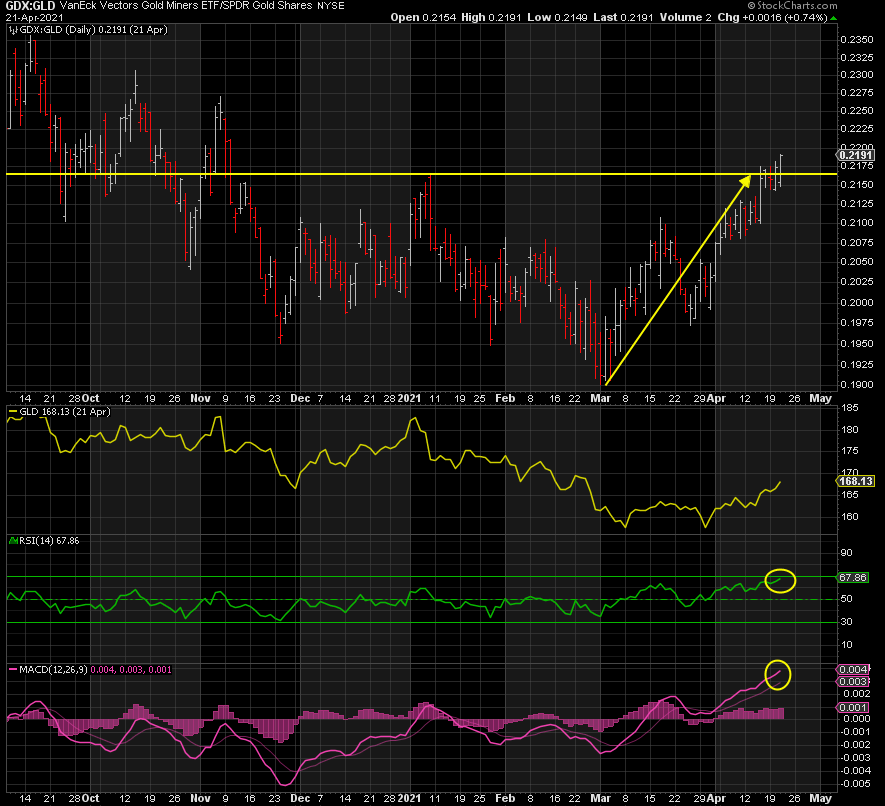 As forecast back in February, GDX has outperformed Gold on this move up off the lows. However, it is due to underperform Gold over the next few days and weeks given that the GDX:GLD ratio is now extreme overbought on both the RSI and MACD. Once these overbought conditions have corrected somewhat, I expect GDX to power ahead of Gold again. 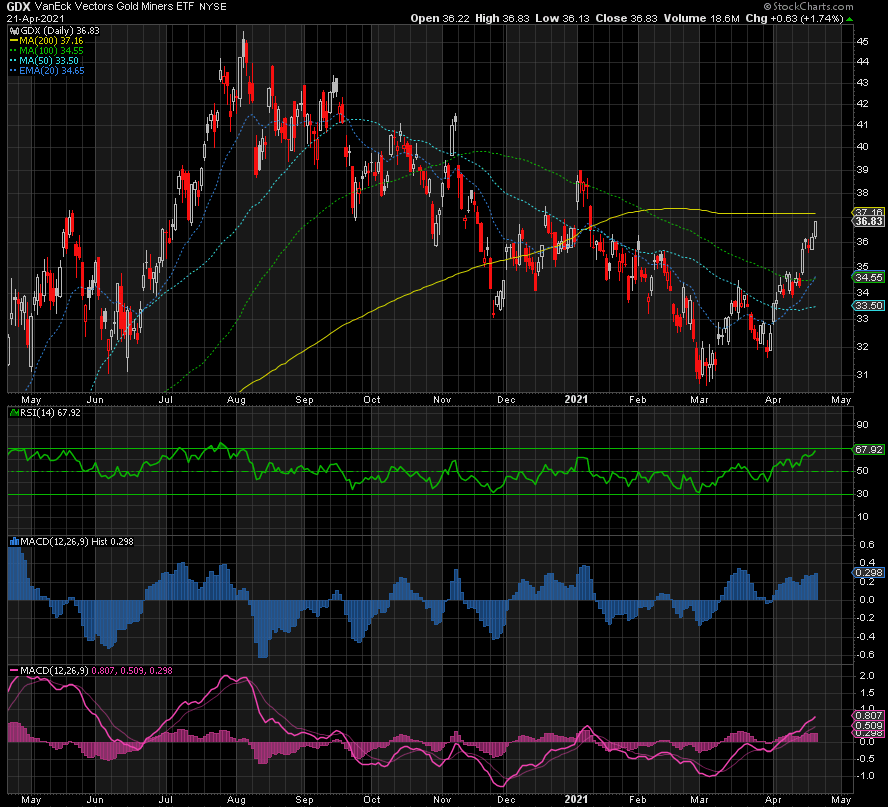 I expect GDX to hit new highs this year.

GDX is approaching key resistance at its 200-day moving average after a strong 1,2 rally off the lows in March. I don’t expect it to break through at the first attempt, so don’t be surprised if we get a short-term pullback at the same time as Gold. But on the second attempt, I do expect it to break that resistance. Support on the downside is at 34.50-35. 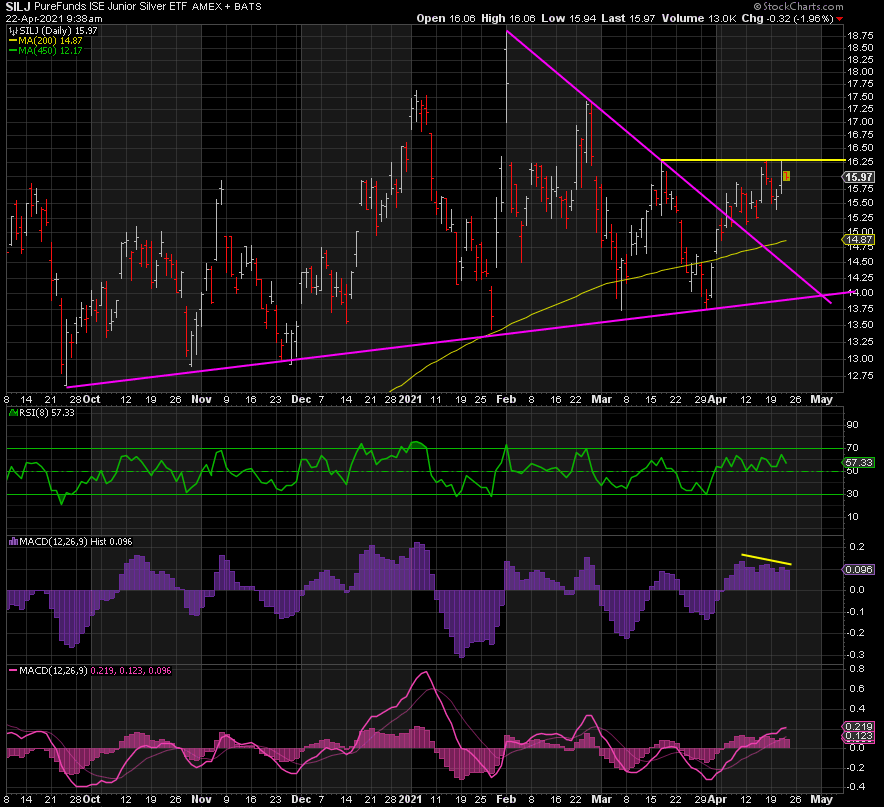 I believe SILJ will set new highs this year and outperform Gold, Silver, and GDX.

SILJ has run into a brick wall here at 16.29, the prior high on two occasions. Again, it’s no surprise that we’re seeing some short-term weakness here. Given the volatility in SILJ, this could fall all the way back to ~14 before turning up again. However, it has broken its downtrend since the peak on February 1 and is getting ready to blow the lid off once this pullback is done, imho. If you want leverage in the metals and miners sector, this is the place to be if and when this plays out.

Timeframes matter. In the very short-term, I expect to see pullbacks across the sector. But unless we see key support levels broken on the downside, this just provides one last opportunity to get long for new highs this year.