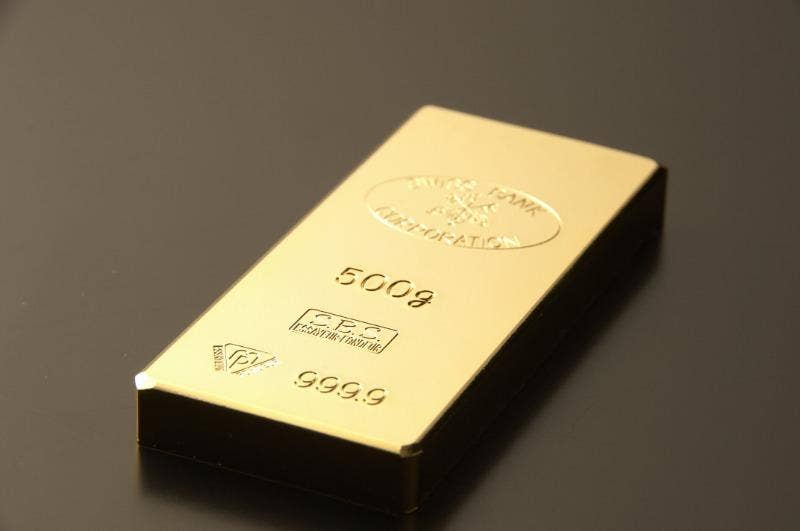 Gold has been driven by problematic inflation, prospects of a recession, excessive public and private debt, widening credit spreads, the onset of a bear market in equities and bonds, and a growing loss of confidence in the Federal Reserve ("Fed"). Our commentaries on these matters can be found in my previous Insights commentaries.

“Putin's war introduces yet an additional reason to stoke investment demand for the yellow metal.”

In our opinion, the gold price, despite its strong rise over the past two years, still fails to adequately reflect these risks. In nominal terms, the March 31, 2022, gold price of $1,937 exceeds the previous monthly average high of $1,825 set in August 2011, but still lags the inflation-adjusted equivalent of $2,328 based on the August 2011 high (Figure 1). The price of gold has been treading water for 10 years while the investment fundamentals have improved dramatically. That is why, in our opinion, significant upside lies ahead for gold and related equities. 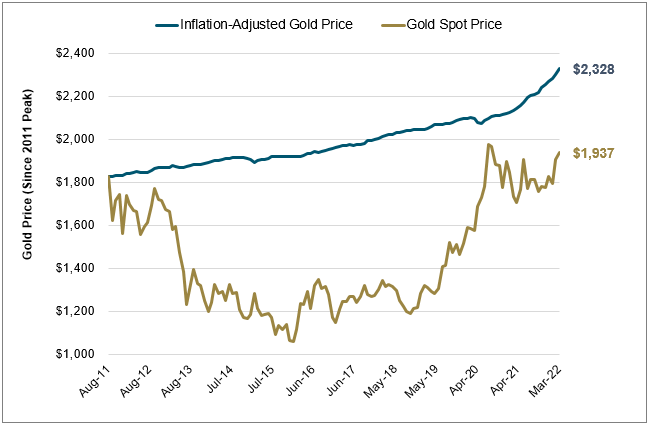 Source: Bloomberg as of 3/31/2022. Gold Spot Price measured by GOLDS COMDTY. Inflation-Adjusted Gold Price calculated by taking the spot price of Gold on 8/31/2011 ($1,826) and adjusting it by the month-over-month consumer price index (CPI CHNG INDEX). Included for illustrative purposes only. You cannot invest directly in an index. Past performance is no guarantee of future results.

Putin's war introduces yet an additional reason to stoke investment demand for the yellow metal. It is not only war in the kinetic sense, but the reserve currency and cyber aspects that have far-reaching implications for gold. Ukraine has elevated a long-simmering currency war to center stage. The dominance of the U.S. dollar (USD) as a global reserve currency — which represents ~59% of the world's allocated reserves (Figure 2) — has been contested for more than a decade, but the Russia-Ukraine War significantly ratchets up anti-dollar hostility. The end result could be the full exposure of the woeful state of U.S. credit.

The weaponization of the dollar "refers to the U.S. government's exploitation of the currency's global dominance in order to extend the extraterritorial reach of U.S. law and policy."1 Longstanding objections to the U.S. dollar's reserve status include critics from not only China and Russia but most of the "Global South" countries and even European allies. Conflict in the sphere of currencies is beyond the power of any single nation or group of nations to control. In this domain, Fed policy is irrelevant. 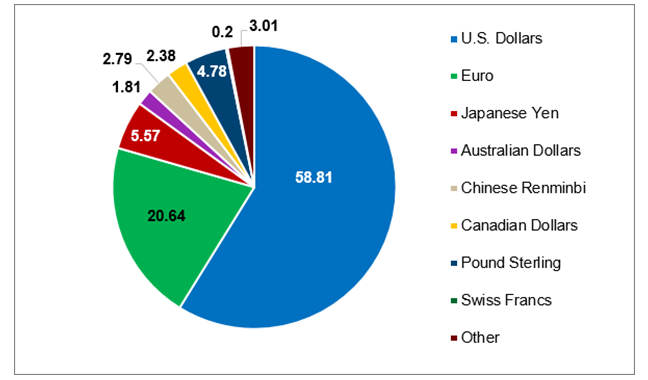 Source: IMF. Included for illustrative purposes only. Past performance is no guarantee of future results.

To counteract Russian aggression in Ukraine, Western countries imposed unprecedented sanctions that included confiscation of Russian financial assets and property held in Western jurisdictions. "The U.S., Europe and Canada pledged Saturday [February 26] to prevent the Central Bank of the Russian Federation from deploying its $630 billion stockpile (60% of its international reserves) 'in ways that undermine the impact of our sanctions', they said in a joint statement Saturday."2

In the opinion of many, including ours, this step delivered a critical blow to trust in paper currencies and in the safety of assets entrusted to Western financial institutions that may be impossible to restore, absent a complete shakeup of existing international conventions.

The Russian response announced on March 28 and April 3 circumvents the U.S. dollar to settle international trade. Russia temporarily pegged gold at 5,000 rubles per gram or $1,300/ounce at the time of the announcement. In the weeks following the announcement, the ruble rallied 73% to recover substantially all of the damage inflicted by the sanctions announced on February 26. Once the ruble revalued in line with prevailing USD gold prices, the Central Bank of the Russian Federation removed the peg but the message was loud and clear: Russia is prepared to back its currency with gold, as or when needed. Using a ruble-gold peg as a reference price, the U.S. dollar has been cut out of the trade loop. To import energy from Russia, buyers must pay either rubles or gold. Sellers will no longer need to park proceeds in U.S. Treasuries.

The Russian model for selling strategic raw materials sets an example for other nations with divergent political interests and currencies to follow. To the extent that the Russian prototype is imitated, it will erode trade denominated in USDs and shrink the pool of offshore capital forced to recycle U.S. domestic deficits by investing proceeds in U.S. Treasuries. Widespread adoption of the Russian model would expose the perilous state of U.S. creditworthiness and drive up interest rates independent of any design by the Fed. 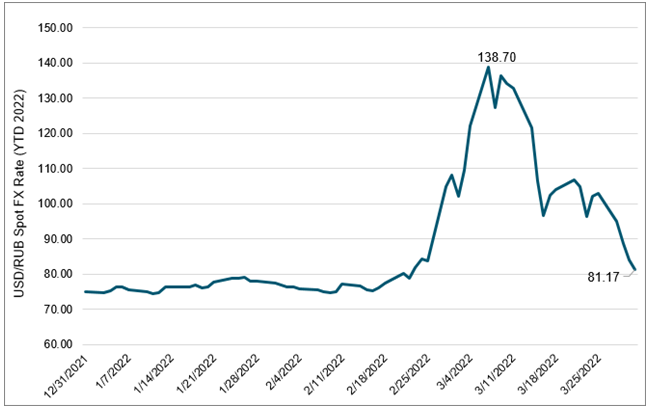 International sanctions pushed the ruble to a record low of 138.70 rubles per U.S. dollar, but it has rebounded, supported by foreign dependence on Russian oil and natural gas.

Source: Bloomberg as of 3/31/2022. Reflects the reciprocal of the RUB/USD Spot FX Rate measured by RUBUSD CMPN Curncy. Included for illustrative purposes only. You cannot invest directly in an index. Past performance is no guarantee of future results.

Could these events — the confiscation of Russian reserves and the Russian response — unleash a chain of events leading up to the financial market equivalent of the "Big Bang"? An excellent Doomberg article3 states that a "singularity" or Big Bang means that what "transpires on either side is unknowable from here." If so, the financial market playbook following the Global Financial Crisis, in which the Fed provided liquidity through expansion of its balance sheet by driving financial asset valuations to unheard of extremes, must be tossed aside. Fed policy would no longer be the fulcrum of financial markets. Counterparty distrust would disconnect real assets from nominal claims. A financial market Big Bang could trigger a long-term decline in the financialization of commodities, including gold.

The traditional framework for understanding the economy, inflation, interest rates and other macroeconomic forces assumed an international order based on the U.S. dollar as the primary reserve currency. The Russia-Ukraine War could mark a tipping point that significantly diminishes the pool of offshore capital to finance U.S. deficits. The repercussion would be a severe mismatch between supply and investment demand for U.S. Treasuries. Two additional factors will exacerbate the mismatch: aggressive Fed balance sheet reduction and unexpectedly high deficits caused by the impending recession.

Given the negative supply and demand picture against a backdrop of persistent high inflation, one must ask, how high do interest rates need to rise to compensate rational investors? That level is most likely greater than whatever the Fed has determined to be the so-called "neutral rate." It is likely to be high enough to cripple the economy and deflate financial assets. The road to equilibrium interest rates promises to be far more torturous than that contemplated by the investment consensus. Thanks to Putin's currency gambit, that road has become the central investment issue of the moment. The belief that Fed policies are adequate for the task seems highly flawed. Respected observers, including Mohamed El-Erian,4 have concluded that it will be impossible for the Fed to thread the needle between taming inflation and causing a recession.

Since the June 2021 Federal Open Market Committee (FOMC) meeting, the prospect of higher interest rates, as per the policy design of the Fed, has been the major headwind for gold. We now believe that rising rates, driven by market forces, will become the tailwind. Investors have been able to overlook the negative investment outlook for debt and interest rates as long as the Fed and foreign investors have absorbed the flows. Now that these two sources of demand could be drying up, they may not be able to handle the truth.*

The state of U.S. sovereign debt is precarious and can no longer be swept under the rug. U.S. debt-to-gross domestic product (GDP) is now the highest in history (Figure 4). The stage is set for a significant devaluation of the U.S. dollar against gold, in our opinion. Investors must act accordingly.

In conclusion, it is our opinion that the investment fundamentals have improved dramatically for gold. That is why, in our opinion, significant upside lies ahead for gold bullion and gold mining equities (Figure 5). 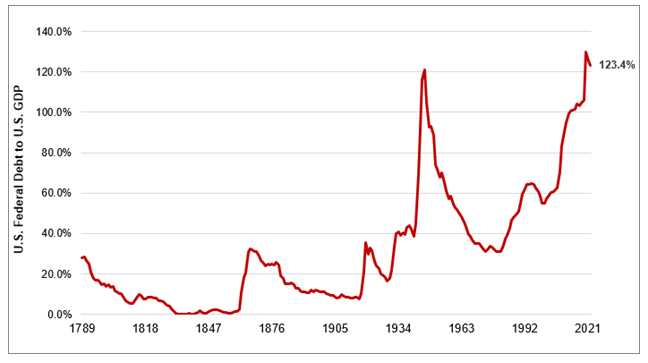 Source: MacroTrends and Bloomberg as of October 2021, the latest available data at the time of writing. Reflects the average of debt/GDP per calendar year, with the exception of the October 2021 data point. Included for illustrative purposes only. You cannot invest directly in an index. Past performance is no guarantee of future results.

Gold mining equities are now near a 35-year low vs. gold. 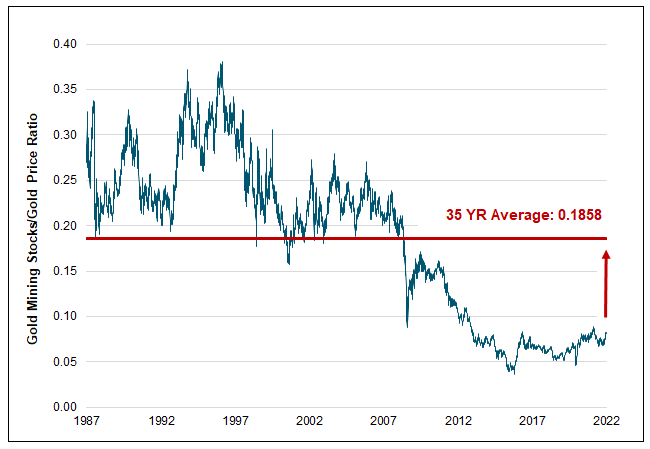 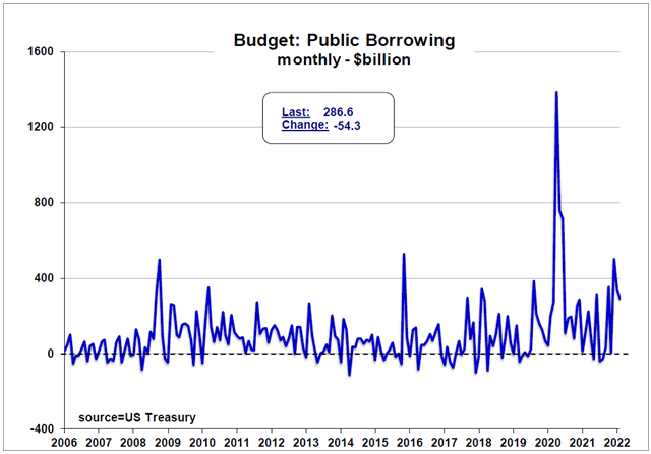 * Public borrowing is averaging $400mm/month. The combined fiscal and trade deficit is running at $3.1 trillion. National debt officially exceed $30 trillion as of February 2022, of which Fed holdings are roughly $6 trillion. The average interest rate on Treasury debt is 1.556%. The 2-year interest rate of 2.69% as of 4/11/22. If all maturing debt is refinanced at that rate, the fiscal deficit would rise by $300 billion. Most of the publicly held Treasuries have short-term maturities which means that the fiscal deficit is highly sensitive to rising rates.