The Tipping Point for Gold 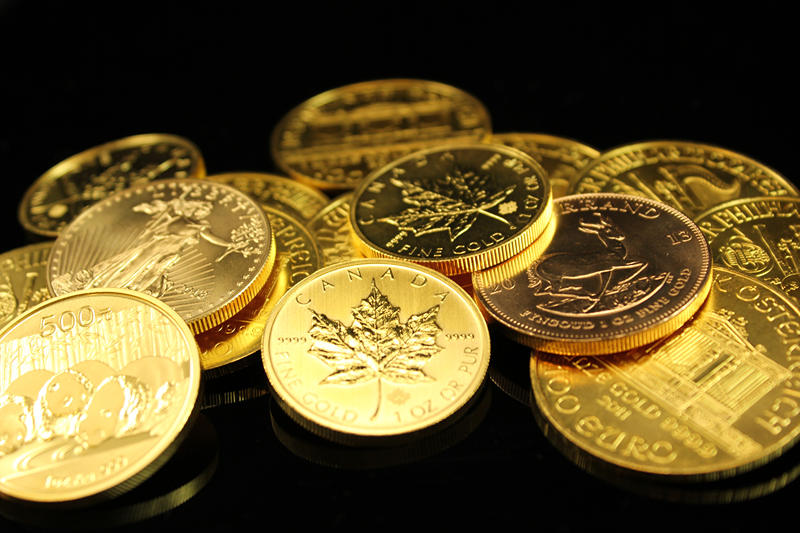 Gold got hammered this week following the higher-than-expected CPI. Although that was the trigger, there were signs this was coming. 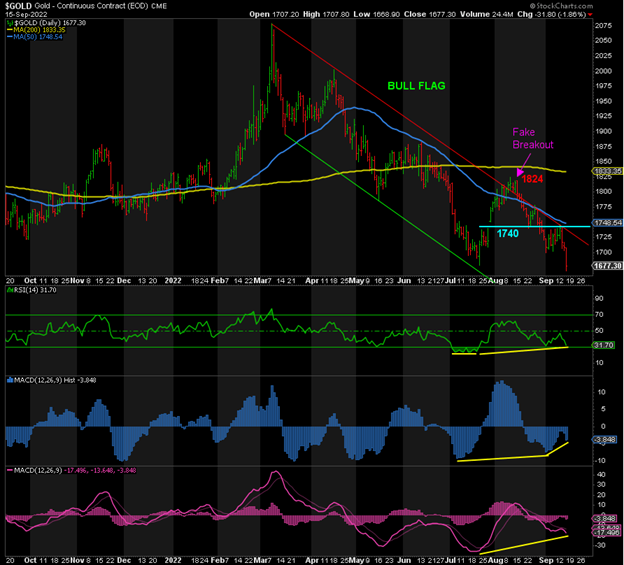 Gold stalled at its downtrend resistance in red and resistance at 1740 in blue, a powerful confluence. After such a long decline and so many attempts to break 1675, it was a magnet for the Bullion Banks to take out the stops below there before any change in trend to the upside could occur. This is precisely what happened Thursday.

However, now we have a positively divergent lower low across all indicators. This is the ideal scenario I originally forecast way back in July 2021.

The Wave 4 A-B-C correction I forecast back then is also basically complete, with the risk of a dip to 1663 next, where wave C is the same size as the decline in wave A. If this correction is indeed complete, wave 5 up to 2300+ is next. 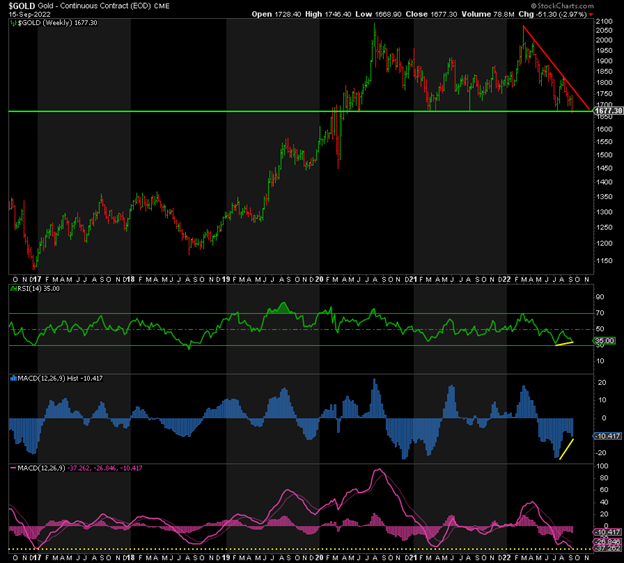 The weekly chart is also confirming the positively divergent lower low on both the RSI and the MACD Histogram in blue. The MACD Line at the bottom of the chart is at its lowest level since December 2016, when Gold was at 1124. Think about that! It’s also lower than it was at 1450, the low in March 2020, and 1167, the low in August 2018. The last time it was more oversold was in 2013, nine years ago.

Sentiment is in the sewer too, a wonderful contrarian indicator. Funds are net short Gold for the first time since 2019, when Gold was bottoming out in the 1200s. Small Speculators—i.e., retail, the so-called “dumbest of money”—have their lowest net long position since December 2018. Both Funds and Small Specs are almost always wrong at extremes. 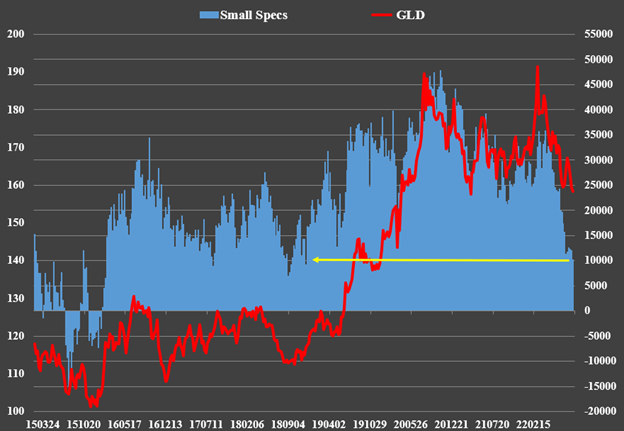 The 10-Year nominal yield just hit a negatively divergent double top at ~3.50, with the risk of a few more basis points higher. The 10-Year real yield just hit 1.05%, its highest level since 2019. The risk-reward is skewed to the downside in yields, imho. Meanwhile, the DXY looks like it is finally running out of steam following multiple negatively divergent higher highs on both the weekly and daily charts. However, I don’t rule out a move up to 113 before a bigger dump occurs.

In the meantime, China and India in particular continue to load up on physical Gold. Bridgewater is joining the party by buying into three physical-backed Gold ETFs in China. Silver is being drained from the SLV ETF, the LBMA vaults, and the COMEX futures markets. Inventories of physical metals are drying up, sending premiums over spot up to 50%, over three times their normal level and higher than in April 2020 when Swiss Gold refineries were closed due to Covid. India is loading up on physical Silver based on import data.

All we’re waiting for is the Fed to just pause. But Gold and the rest of the sector may not wait for the inevitable, much like they didn’t in November 2018 and October 2008, prior to massive new amounts of QE months later.

As I always say, don’t try to catch a falling knife, but wait for a break of resistance. That resistance is 1740 unless Gold falls much further, then 1680 becomes the resistance to break. Then look for a higher low followed by a higher high to signal that the bottom is in. Until then, the trend remains down for now. Whenever that bottom does occur, there is a massive amount of fuel built up for what follows.