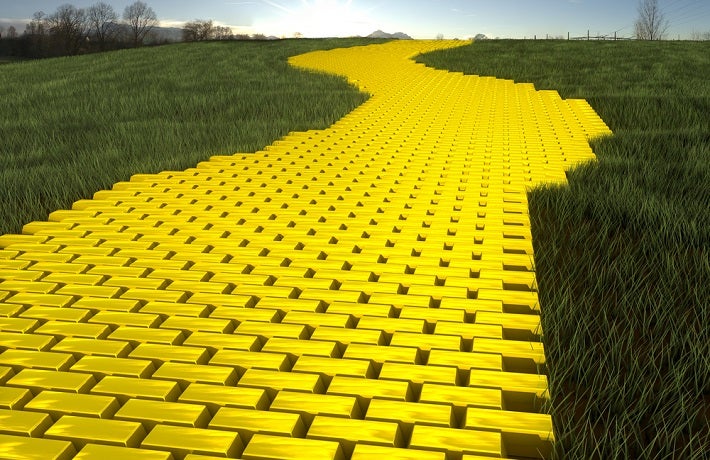 Last week, I said: “The big picture remains the same: When the Fed reverts to QE and the dollar tanks, Gold and everything else will soar. I believe a return to QE is inevitable at this point.” Any reversals in Gold present the final opportunity to “BTFD”.

Well, the Fed took a huge step forward in that regard yesterday. They announced:

They are inching their way towards rate cuts and a return to QE. However, in order for that to occur, the Fed will likely need an excuse, such as a sizeable pullback in stocks or another ~20% dump in stocks.

Bear markets are deflationary in nature and tend to drag down all markets, including Gold, just as they did from March to October 2008, when Gold fell 30% from $1000 to $700. The Bullion Banks may relish such an opportunity to slam Gold down one more time.

However, Gold bottomed in October 2008, six months in advance of the QE’s inception in March, and didn’t look back until it had risen almost three times in three years to $1900. Gold didn’t wait around for QE to occur, it anticipated it and the 15% decline in the dollar index from 88 to 75 that ensued.

Let’s review the data in hand…

Daily: Gold has still not closed above key resistance at 1316 despite its bounce off 1280 support. The RSI is around a neutral 50. The extreme oversold condition in the MACD Histogram has been fully corrected back to zero, also neutral. The MACD Line is around zero also. Nothing to see here.

Weekly: Gold has still not broken back above weekly trendline resistance. Backtesting it now. The RSI has fallen back from an extreme overbought 71 to 55 and has now risen back up to 61. It could fall from here or could provide the opportunity for a negatively divergent higher high above 1350 before heading lower. The weekly MACD Histogram has corrected its overbought condition back to near zero. Meanwhile, the MACD Line is deciding which way to turn, up or down. Again, unfortunately, nothing definitive here.

What is interesting from a long-term perspective is that the lowest levels in the 21-day moving average were at the three major lows in Gold since December 2015: 1045, 1124, and 1167. Higher lows. Meanwhile, the top side has been capped between 1360-1370. This suggests the next big move is up, consistent with QE and a weaker dollar courtesy of the Fed. Only a close below 1184 and a break of 1167 negates this expectation.

Last week, I stated, “Bullion Banks Appear Ready to Slam Gold Imminently,” based on a massive one week increase in open interest of 60k contracts. I shared that this had only occurred on three prior occasions in 1040 weeks, and each time it reflected a sharp increase in Commercial short contracts and a subsequent drop in Gold of ~$100. We got a drop of $20 immediately thereafter, but it turned out to be a red herring. Commercials did not increase their shorts, they reduced them by 5k.

Although this undermined the immediate downside scenario, the Bullion Banks could still try to squeeze out all of the weak longs, as in March-October 2008, before the massive rally to follow. At the same time, they do not want to be caught short going into such a rally, which may explain why they are reluctant to become significantly short. When Gold started to rally in 1999, several trading houses (as Bullion Banks were called back then) had to be rescued by the Bank of England when, under orders from Gordon Brown, they were told to sell Gold bullion into the market to drive down the price. They did just that, and Gold hit a low that has since come to be known as the “Brown Bottom.” We’ve never looked back since. The point being that even if the Banks do try to force everyone out before the rally ahead, it will likely create the last bargain buying opportunity in metals, perhaps ever. “BTFD”.

Having reviewed the positioning in all of the disaggregated COT data categories at all of the major peaks and troughs going back to 2006, they are all within the ranges for a major low, except open interest, of course. None of them are in peak territory.

For example, Money Managers or “Funds” were net long just 17k contracts of 3% of open interest on March 12. Both are closer to the minimum long levels for a trough in Gold, which is very bullish for Gold, and well below the average position for a major low. At the same time, the current position as of March 12 was below the minimum and miles away from the average long position for a peak in Gold, also bullish:

The same data for the Commercials, Banks, Producers, etc. all say the same thing. This suggests that we are closer to the October 2008 scenario for Gold next, short-term reversals aside.

As bond yields fall while the CPI remains the same, ~2%, real interest rates fall. TIPS, or Treasury Inflation Protected Securities, rise in price as their yield, or real interest rates, fall. The correlation between TIPS and Gold is close to perfect on an inverse basis.

This has been primarily due to the continued drop in bond yields. The Fed is pausing interest rate hikes for the rest of the year and ending balance sheet reduction in September. It has also been talking about emergency measures to be taken when the next crisis hits, including rate cuts and a return to QE, plus allowing inflation to rise above 2%. Higher inflation with lower interest rates and bond yields would even lower real interest rates. The worst-case scenario for the dollar and the best scenario for Gold.

Simply put, the further real interest rates fall, the higher Gold is likely to go. This further supports the bullish view for far higher Gold prices later this year and next, short-term reversals aside.

The risk of a short-term sharp reversal in Gold prices remains, in conjunction with another stock market sell-off and an attempt by the Bullion Banks to squeeze out all of the weak longs before the rally to follow. Similar to the period from March to October 2008.

However, the ongoing change in Fed policy towards monetary stimulus on steroids, the current positioning data, and falling real interest rates all suggest that we’re closer to October 2008 than March 2008, and the risk-reward in precious metals is heavily skewed to the upside over the next few months and years.

Central Banks continue to buy Gold on the cheap at the fastest pace since at least 1971. They know what is coming. Just follow the smart money.