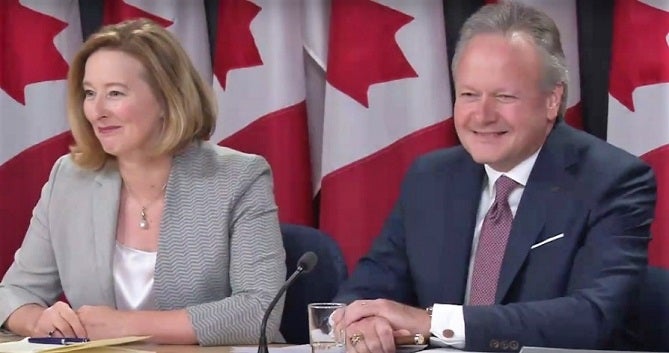 This week’s Bank of Canada press conference, as always, was a communication professional’s dream.

A smiling Governor Stephen Poloz and Senior Deputy Governor Carolyn Wilkins defended the central bank’s 25 –basis-point rate hike with assessments about the economy, risks to the system and paths forward.The presentation was filled with impressive terminology like “stimulative monetary policy,” coupled with sophisticated references to three types of interest rates and five types of inflation.

Ordinary Canadians understood none of this.

That is how the Bank of Canada has for decades managed to effectively camouflage its incentivization of massive financial, debt and spending bubbles which have left the country tottering on the brink of ruin.

Following are key things that the central bank's clever media strategy is hiding.

The Bank of Canada employs more than 100 economics PhDs and financial specialists. However the unstated fact is that they too are essentially clueless about monetary policy.

In today’s hyper-financialized world, even the best economists can’t define what money is. We know that cash is money. So are the digits in your bank account. But is a GIC that you can cash in tomorrow money? What about stocks and government bonds?

Economists’ inability to define money means that they don’t know how much they and the Big Banks have printed, nor what the inflation rate is.

The Bank has always been able to attract the country’s top people. However, as Ludwig von Mises noted a century ago, once price discovery is gone, effective understanding of the economy becomes impossible.

Central banks are set up to steal your money

An even funnier fact is that because universities teach little about economic history, few Canadians—even the Bank of Canada’s PhDs—know why it exists.

Many can recite rote definitions of its functions. These range from ensuring financial stability to targeting inflation and balancing that with economic growth. However, all of that stuff is incidental.

The Bank of Canada and its related institutions exist for one reason: to print money, which they then distribute to favored interest groups and obscure how this process impoverishes ordinary Canadians.

As John Maynard Keynes famously noted, not one man in a million understands how central banks rob people’s money. The Bank of Canada’s job is to make sure this stays that way.

The BoCs “cocaine cowboys” are sponsoring a Ponzi

Richard Fisher, the former head of the Dallas Fed, has likened loose central bank policy to giving the economy cocaine and heroin. Cheap money provides a short-term boost. But it requires ever-larger doses to keep it afloat.

According to Statistics Canada data , the central bank’s loose interest rates have hooked Canadians on a debt-growth path, which has doubled personal, business and government liabilities since the financial crisis to $6.1 trillion as at June 2018.

Even a cursory look suggests that the Bank of Canada’s model is a Ponzi scheme. In fact stabilizing debt levels would be impossible without collapsing the system.

Armed guards everywhere … but no gold .

The Bank of Canada’s worst failure has been its complicity with the Liberal government in selling off Canada’s emergency gold reserves.

This during a time when Russia, China and other key world central banks have been stocking up and repatriating their own gold stocks, in order to prepare for the worst.

Bank of Canada officials point to Canada’s Finance Minister as bearing responsibility for ordering the gold sales.However until they speak out on this issue, they remain complicit.

Warren Buffet once said that it’s only when the tide flows out that you find out who is swimming naked. Right now Canada needs a bathing suit.

Sadly, checks on the Bank of Canada’s rogue monetary policies are essentially impossible.

The complexity of the verbiage, formulations and statistics that academic economists have developed over the decades to justify and mask their actions are such that any efforts to control them, would soon be reversed.

The only possible check on unconstrained government borrowing, spending and money printing is thus a free market in currencies.

This would minimize central bank theft and enable traders to fairly identify and quantify the extent of currency debasement.

Yet while Canadians don’t understand monetary policy they love and trust government. That is why it is so easy to pick their pockets.

That’s also why that the path forward starts with Polaz and Wilkins refusing to be part of the charade.

R. Bacon
Reply
Very good article, but a little shallow. Canada used to have over 1,000 Tonnes of gold on hand why was it sold off at 250 an oz.
Reply

Concerned Citizen
Reply
Hello Peter, It's a good headline and I was quickly lured to your article. Like any decent Canadian who's aware of the great Canadian gold heist I find it disturbing. I try to make sense of it all especially recently when we read that a number of other countries are busy loading up on gold. It's hard to find accurate information though and I was lured to your article hoping for a bit more insight. It's important that the public know the truth of what our central bank really is. This could have been a great article if you had resisted playing partisanship. I have no stomach for partisan politics, pardon me for in my opinion it is one of the main reasons why we're in such a mess. It's a very effective tool for exploiting the masses for while the population remains divided over ideology, the real sleaze are convincing those clowns we call politicians to dump our gold reserves into welcoming hands. What this naive and complacent Canadian population needs is a bit of truth to nudge them awake once in a while. My understanding is that the bulk of the gold reserves were dumped a few years ago under the previous government and more recently our current finance minister was talked into completely draining the vault of the few remaining bars. The real question should be why and who is pulling the strings. I can assure you that none of those clowns that the voters send to Ottawa regardless of their pet ideology have the wherewithal to even begin to contemplate such decisions. I continue to search for the truth. I'm interested in true business and finance and have long ago awakened to the scam that is partisan politics. Regards, G.L.
Reply

Canadude
Reply
I think Concerned Citizen is correct. Not a partisan issue. In fact the main gold sales began in 1985 under Mulroney with John Crosby Finance minister acquiescing to US demands and it continued under various governments until it was all gone. Also agree with R. Bacon that the article should have in provided more detail and reasons for why we should have a large and liquid gold reserve. Canadians deserve more monetary sovereignty and it is not achievable with our current gold reserves being in "deep underground storage" (I.e. not yet mined nor refined and assayed).
Reply
View more

william scott
Reply
Good article Mr Diekmeyer, however could you expand on the Central Basnk's lack of gold reserves.
Reply
Leave a Comment