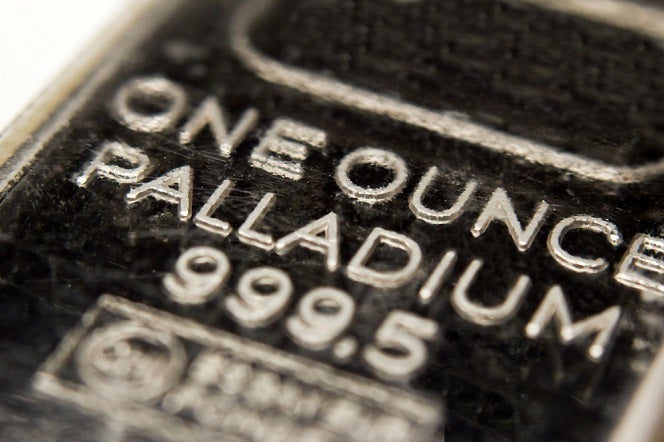 Over the past few months, we've written frequently about palladium and the threat it poses to The Banks' Fractional Reserve and Digital Derivative Pricing Scheme. As palladium prices are continuing to rise, we thought it best to explain this dynamic again today.

A few years back, my friend Max Keiser coined the phrase "buy silver, crash JP Morgan". Back then it was hoped that silver could be a "magic bullet", where physical demand would expose and crash the current fraudulent pricing scheme. And it nearly worked, too, as a massive Commercial short squeeze in 2011 nearly led to a runaway price spike. Only through the direct, official intervention of the CFTC and CME was price reversed and the crisis averted.

In the eight years since, JP Morgan was approved to open their own COMEX silver vault, and they now store nearly 150,000,000 ounces of silver for use against any potential price squeeze. So at this point, the idea of crashing or breaking The Banks through silver seems unlikely. On any sustained future rally, JPM can simply deliver their silver stockpile in an unwind of their short position and, for them at least, a repeat of 2011 can be avoided. Here's just one article that we've written on this subject: https://www.sprottmoney.com/Blog/jpmorgans-dominat...

But that's just silver. The Banks are still exposed through the identical pricing schemes that are applied in gold, copper, platinum and... palladium. And this is where 2019 could get very interesting.

Since last August, a physical supply squeeze has been evident in palladium. How do we know that this situation is due to a physical metal deficit? Two things:

1. Extraordinarily high lease rates for physical palladium in London, where one-month lease rates in 2019 have occasionally been in excess of 20%.

2. Full backwardation of the futures board in New York. Backwardation (where spot prices exceed future prices) is extremely rare in the commodity sector, particularly in the precious and industrial metals, and it is almost always indicative of a supply squeeze. See the chart below.

And you can see this on the daily price chart too. Note that the advance in palladium is NOT some sort of parabolic speculative blow-off. Instead, what you see below is an unrelenting grind higher due to an ever-tightening vise of dwindling physical supply.

Having established that this price rally is primarily due to a shortage of physical palladium, please take a moment to ponder this next bit of information...

For COMEX silver—which was hoped to be the "magic bullet"—there are currently 296,000,000 ounces of silver stored in the COMEX vaulting system. This compares to a total COMEX silver contract open interest of 220,000 contracts. At 5,000 digital ounces/contract, the ratio of leverage of digital to vaulted physical is 3.72 times. Stated another way, there are 3.72 ounces of tradable silver exposure for every one physical ounce in the vaults (both eligible and registered).

For COMEX gold, there are reported to be 8,221,512 physical ounces in the COMEX vaults versus a total open interest of 480,000 contracts, representing 48,000,000 ounces of digital gold. That makes the ratio of digital to physical leverage 5.85 times.

Now check this. For COMEX palladium, there are reported to be just 42,583 ounces in the vaults. Again, that's BOTH eligible AND registered. However, there are currently 28,846 contracts of open interest. At 100 digital ounces per contract, that's 2,884,600 ounces of digital palladium exposure. Applying the same math as above, we find that the COMEX palladium market exists upon leverage of 67.3 times. Hmmmm... how about that?

What's the point? In 2019, do you want a "magic bullet" and something that could lead to a force majeure declaration and exposure of The Banks' fraudulent schemes? Watch palladium! What do you suppose will happen if, sensing Bank blood in the water, the "Bond Vigilantes" of yesterday become the "COMEX Vigilantes" of tomorrow? That's the point.

Should the LBMA/COMEX palladium market fail and collapse, sensible people and institutions around the world will be correct to conclude that gold and silver operate under an identical pricing scheme. If there's not enough physical palladium to cover the Banks scheme, and thus a price squeeze, then there's not enough physical gold and silver either.

And there, my friend, is your magic bullet.

Of course, The Banks may still be able to wriggle off the palladium hook. Perhaps they can collapse price through unbridled derivative issuance? Maybe a fresh supply of palladium will suddenly be unearthed? But if not, it's hard to see how this doesn't end in chaos for The Banks. And if that chaos extends to gold and silver...

This year and next are already pegged to provide the best gains for gold and silver investors since 2010-2011, as central banks capitulate, interest rates are cut and QE programs re-started. Now throw in some market collapse and possible force majeure declarations, and you've suddenly got a recipe for considerable price gains in the months ahead.

Mehmet Cetinkol
Reply
Craig, Thanks for the information. How does the ratio of leverage of digital to vaulted physical look like for Platinum? How do you like Pt here?
Reply

Stephen Bard
Reply
Thank you for the information. So do you suggest buying these metals? Gold, silver, palladium, platinum, rhodium? Are the etf's a good vehicle? They say they hold physical bullion. Are they over promised at the ratios you quantify? What is the best way to participate in this pricing mismatch?
Reply
Leave a Comment