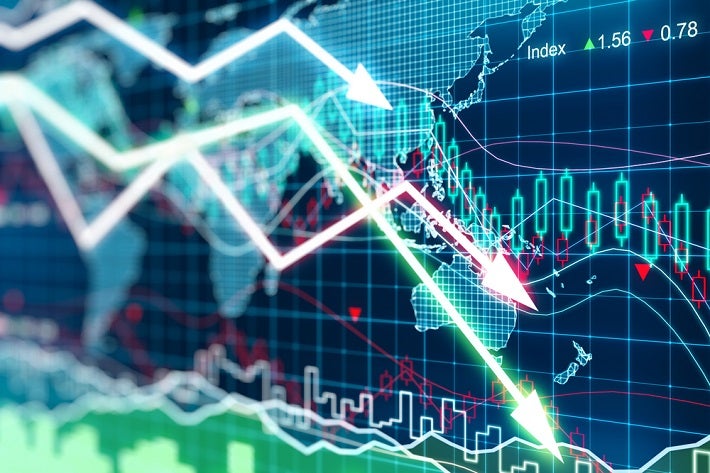 Until then I expect the S&P to slowly grind higher towards 3000-3150, short-term pullbacks aside.

This matters to Gold, Silver, and the Miners, because when stocks crash, the Fed will be forced to reverse policy to rate cuts, QE, and more monetary insanity on steroids, and that will catapult precious metals and miners to new highs.

There are many reasons why I expect another “Crash in the Fall” like that in 2018. I covered Liquidity, Technicals, Elliott Wave Theory, and Sentiment to support the case for a crash in October, “or sooner”, especially based on how close we are to the expected peak circa 3000 plus. What follows are just a few of the many more.

This is back to its lowest level since December 2017. We all know what happened next.

Having held its 200-month moving average yet again, the monthly chart for the 10Y Treasury Bond clearly shows that we have much lower to go yet in yield terms before we hit bottom.

What would it take for that to happen? A crash in stocks? Investors dump equities and race to the perceived safety of Bonds followed by a Fed reversal QE and they start buying treasuries again, driving yields even lower.

And then there is the dreaded “Hockey Stick” which predicted the 2000 and 2008 stock market crashes. This refers to the drop in both 2-Year and 10-Year Treasury Bond yields but the 2-Year yield falls faster as short-term rates are cut or expected to be cut in response to weakening economic and/or financial market conditions.

We are seeing signs of this recently since the 2-10 Year Yield curve bottomed at 11 basis points in December. A sharp move higher could signal trouble for stocks.

Finally, with respect to bonds, high yield bond spreads are typically highly correlated with the S&P on an inverse basis. When spreads fall, the S&P rises. But we’re seeing a clear divergence develop as high yield spreads are trending higher and the S&P continues to rise when it would normally fall. This is yet another warning sign for stocks.

It speaks for itself…

Every time the Large Specs reach peak short positions in the VIX, the S&P falls soon after. Case in point was the early warning signal in Oct 2017 when Specs’ short position reached a record high and began falling. Stocks did too just 3 months later in Jan 2018.

Then we have the lower peak at the all-time-highs in Sept 2018 and we all know what happened next. Stocks fell 20% in Q4.

Now Large Specs’ short VIX position is at new all-time-highs at the same time as the S&P.

Higher lows and higher highs in the VIX itself on a monthly basis were also a warning for stocks back in 2007. We’re seeing the same thing play out today.

It appears to be only a matter of time now before the S&P capitulates again.

Many cite Trump’s need for consistently new all-time-highs going into the 2020 Presidential election in order to ensure his re-election. Put a different way, if the stock market and the economy are in rapid decline, that is going to seriously dent Trump’s re-election prospects.

Trump has repeatedly already called for the Fed to cut interest rates and revert to QE as soon as possible for this very reason:

The result is that almost everyone expects stocks can only go straight up until the Presidential election. Yet another perfect scenario for anyone who wanted to fleece retail investors who are all-in.

Powell has been perceived to cave to pressure from the White House recently to stop the rate hikes and balance sheet reduction, which he has more or less done. But three weeks ago, he reportedly said the following…

Then after Trump again called for a 1% cut in interest rates and a return to QE this week ahead of the FOMC, Powell chose to ignore that call and plans to interest rates on pause for the remainder of the year.

I believe that Powell will not concede any further ground to the President in order to preserve the independence of the Fed. This means that he won’t reverse policy lightly and only in response to a crisis. If true, this supports my thesis for a drop to lower lows in the S&P before we see rate cuts and an actual return to QE thereafter. “No QE, No Bottom” in the S&P.

Another possible trigger for such a crash could be internal conflict at the Fed between Powell and other members of the Fed appointed by Trump and open conflict between Powell and Trump himself. Such a breakdown between the central bank and the Whitehouse is bound to undermine confidence in the Fed’s independence and in US assets in general, most notably the dollar.

Suffice to say, there is plenty of ammunition for a crash ahead of the Presidential election. In fact, if I were Trump, I would prefer a stock market crash and the Fed’s response sooner rather than later to ensure stocks are at new all-time-highs, a blow-off top, long before the next election rolls around.

There are several other analysts warning of a crash later this year.

One of the most notable is Jeff Gundlach. He said the following on April 11:

“the S&P 500 is still in a bear market and will fall into negative territory by the end of summer, at the latest”

“I think US stocks are still in a bear market. It’s pretty typical for the starting point of a bear market to have a decent down move and then a nearly complete recovery. What many people don’t understand is that this kind of behavior is actually a really good selling opportunity.”

“My highest conviction is an upside down «V» for the first six to eight months: A big move up which we’ve had. But now, given the setup in place, I feel like the short-term top is very close and maybe has already occurred. That’s why I think by the middle of the year and certainly by the end of the summer the S&P 500 will be negative year-to-date.”

The Fed understands that the population at large blames Fed monetary policy and specifically QE for the gaping and rising level of inequality in society today and therefore will cave to populist demands for Modern Monetary Theory (“MMT”) when the next crisis hits. They have to submit to this or risk the Fed’s independence or very existence.

Simply put, the Fed will support a helicopter drop of money in response to the next crash. But the deflationary crash has to occur first before the inflationary response. Again, “No QE, No Bottom” in stocks.

Larry Fink, chairman and CEO of BlackRock, said on April 16th that ““We have a risk of a melt up, not a melt down.” In the chart below you will see similar uber optimistic forecasts from Larry at prior peaks in the stocks market. Although it may not happen immediately, if history is any guide, we’re more likely to get a meltdown than a melt-up.

Michael Hartnett stated on April 12 that he expects "a big summer top" but remains "bullish for now", with Bank of America expecting a move higher to SPX >3000 in Q2, before slumping in the second half and potentially retesting the 2018 lows.

A key signal is rising yields which will have a negative effect on housing post Q2 and good news being bad for stocks, i.e. risk of a Fed rate hike increases.

These are just a few of what I am sure are many analysts expecting a crash in stocks later this year to be followed by monetary insanity on steroids from the Fed, further supporting the forecast for such an outcome.

There is ample evidence for the potential of another crash in October 2019 this year, or sooner. I am not saying that it is definitely going to happen, I don’t have a crystal ball, but I am seeing similar factors to those that led to the Oct 2018 crash play out. Note also, I haven’t even mentioned the risk of recession which is a forgone conclusion imho.

If and when stocks do crash, the Fed will respond with aggressive monetary easing that will send all assets higher, especially stocks and precious metals, except the dollar. In my opinion, it is only a matter of time. “QE is inevitable.” Likely MMT too. Ray Dalio seems to agree also.

In the meantime, Gold, Silver, and the Miners, are all undergoing consistent selling pressure since their recent peaks.

Gold and Silver need to break the series of lower highs they have been experiencing to turn the bearish tide.

The good thing is that they are all becoming increasingly oversold, especially GDX. My ideal scenario for a bottom is a positively divergent lower low in each of them coupled with their respective DSIs in the 20s or preferably the teens.

Unless Gold breaks 1167, this is a BTFD market given the rally to follow in my humble opinion.