Time Running Out for Rally 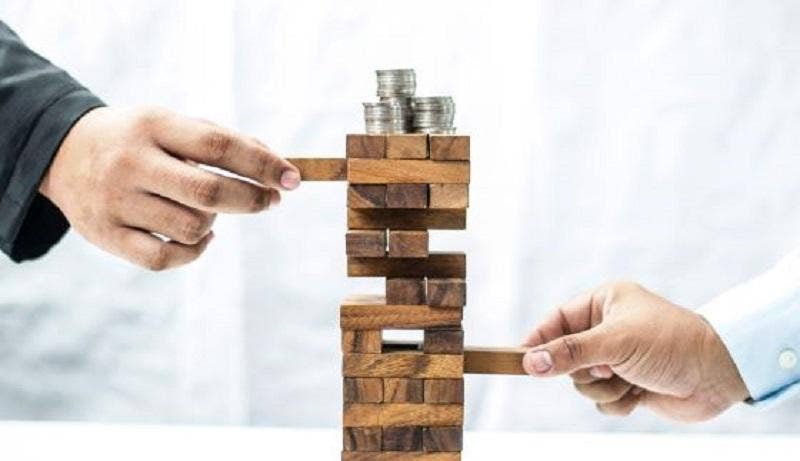 Market fundamentals continue to pile up on the negative side. ECB sits on its hands—i.e., does nothing new—and the Fed slashes liquidity, all while commercial real estate loan losses mount, retail mortgage delinquencies soar at a record pace, and the $600/week for numerous Americans ends in two weeks. Throw in an escalating trade and geopolitical war between the U.S. and China and it’s not rocket science to see where this is heading.

As China’s Zhou Li warned recently, due to the increasing risk of global supply shocks:

"China should brace for a worldwide food crisis."

Massive amounts of liquidity from both fiscal and monetary stimulus have driven stocks, bonds, commodities, and precious metals higher since the crash in March. Since then, the Fed has cut its liquidity by 75% in terms of Treasury bond purchases to $250 billion a month versus the prior run-rate of $1 trillion. On the fiscal side, the $600/week that Americans have received for the past few months expires in two weeks. This is not a recipe for “risk on”. With the July FOMC right around the corner and the overwhelming bullishness across most markets, the risk is growing for wholesale reversals, save perhaps in bonds.

Meanwhile, the U.S. Treasury is building a cash mountain to the tune of $1.6 trillion relative to their average balance of $400 billion, making a possible helicopter drop of $1.2 trillion highly probable ahead of the November elections. The issue is when that drop occurs. The White House will not want to waste this ammunition too early such that the effects of the stimulus disappear ahead of November, nor do they want to have it occur so close to the election that its effects don’t show up soon enough. Hence my guesstimate for such a drop is in the September-October timeframe. What happens between now and then is the issue in the short-term. As I shared in my recent articles, markets are due sizeable pullbacks after enjoying significant rallies. The dramatic reduction in fiscal and monetary stimulus, the primary drivers of markets now, provides the perfect excuse for such widespread reversals until both spigots are turned on again full blast in September and/or October.

My expectation is that when stocks fall, precious metals and miners will too, much like they did in March. Falling bond yields are unlikely to stem their decline because inflation expectations will probably drop even faster, causing real yields to rise. That said, I must emphasize again that this will be the last and best opportunity to buy Gold, Silver, and the miners given the helicopter drop and Fed printing to follow soon after, imho. Said differently, when stocks soar ahead of the November election, so do precious metals and miners—and then some.

Switching to Gold, specifically, as the biggest market in the precious metals space… I don’t rule out a test of the 2011 record high before we head down, but as I’ve said, I sincerely doubt we break it on the first attempt, and even if we do, it is likely to be a false breakout.

Multiple negative divergences across all timeframes continue to pile up, and it’s not a question of “if” but “when” they finally weigh on Gold, just as they did in March. 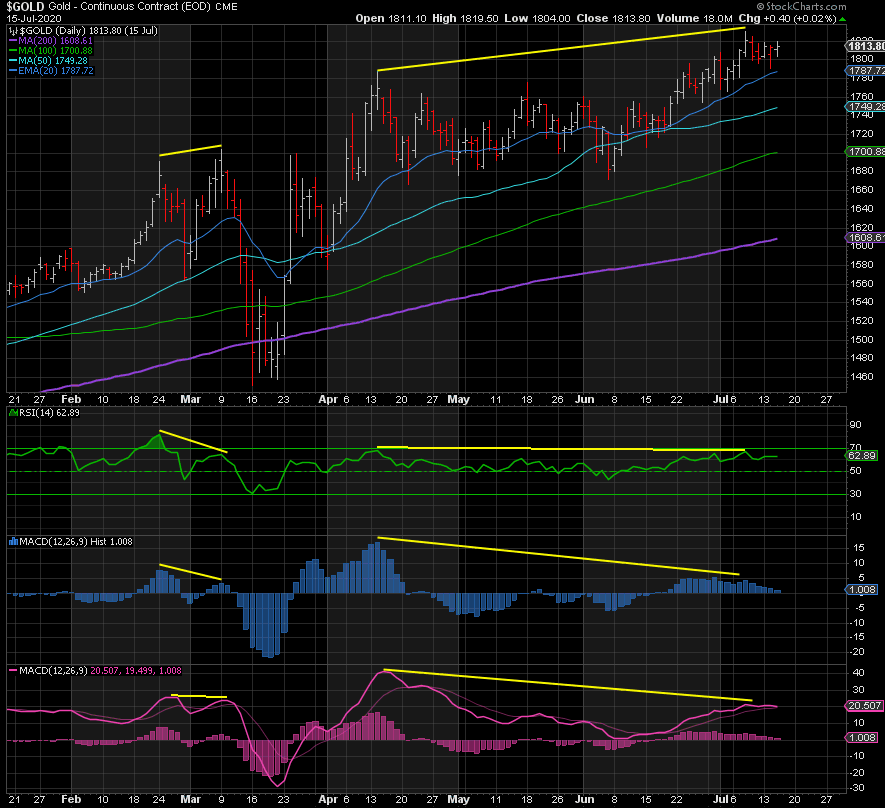 The fact that the MACD Line is already turning down and about to cross its signal (i.e. the MACD Histogram in blue turns negative) is another bearish signal. 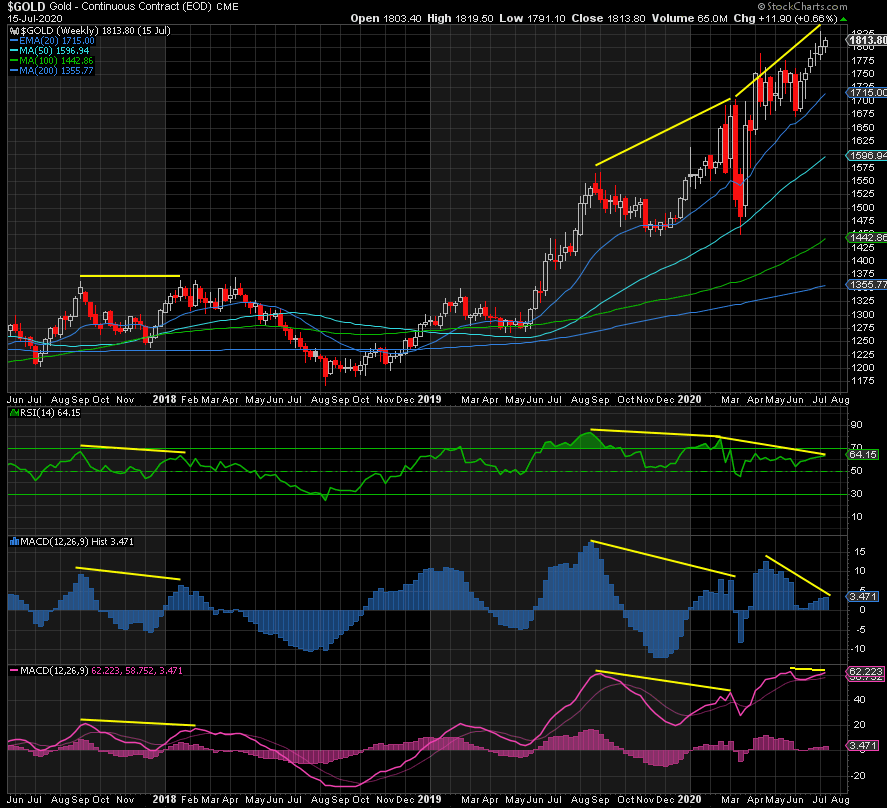 The weekly chart confirms what the daily chart is showing, multiple negative divergences across all indicators, just as it did ahead of the plunge in March and from February to August 2018. The MACD Line is also extreme overbought. 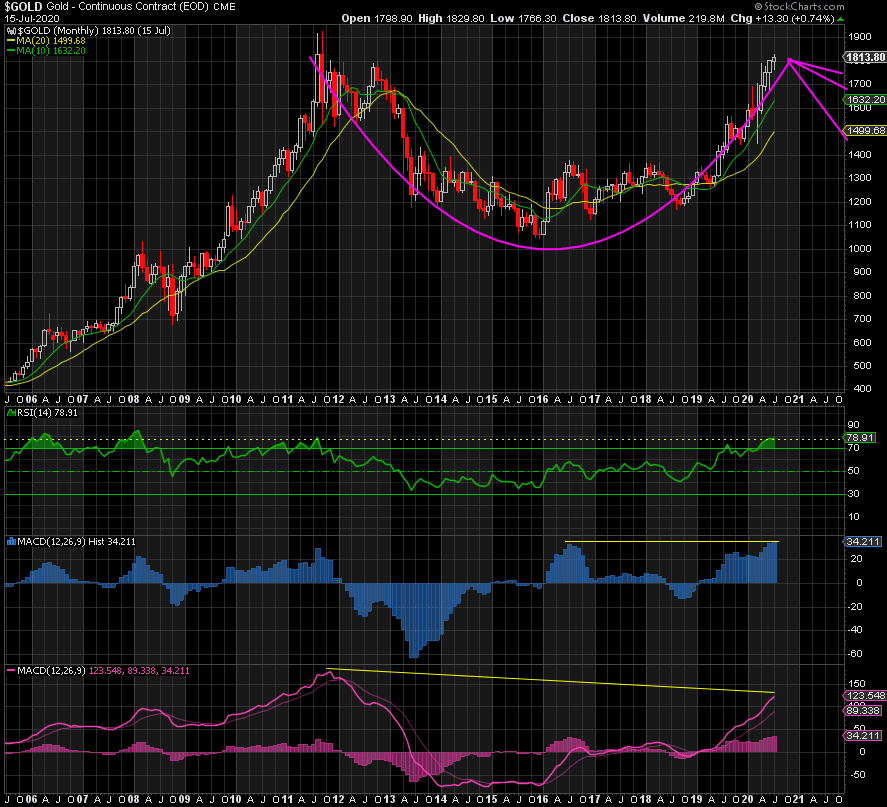 The RSI on the monthly chart shows that Gold is at its most overbought since the 2011 peak that led to a 50% drop from there. The MACD Line is also at its highest since that peak, and if we do get a higher high or double top, it will be negatively divergent. Further, the gap between the Line and its signal is at its highest in twenty years, suggesting at least a retrace to the signal line. The MACD Histogram is also negatively divergent to the peak in 2016. Finally, we’re seeing a clear cup and handle formation on the chart, which also suggests a short-term retracement ahead with the possible downside projections for that retracement.

Taken together with extreme bullishness and Banks’ still heavily short Gold, the data supports at least a short-term pullback, likely associated with a dump in stocks, ahead of the spectacular rally to follow once massive new fiscal and monetary stimulus is unleashed ahead of the November elections.

Targets on the downside for Gold are “at least” 1750—possibly 1670, worst-case the 1400s—before we head up to new highs. Silver and the miners will likely fall the same or more in percentage terms given their high beta to Gold, but will crush Gold in terms of performance once the rally takes hold, imho.

Rod Walker
Reply
Hi David, RodW from the GPT forum days. There is a bigger picture at play here with the coming worldwide food crisis that you are mentioning in your article. We are entering what is being called a Grand Solar Minimum (GSM), similar to the Maunder Minimum which occurred back in the 1600’s. Starting this year it will likely continue until 2055 peaking around 2036-7. Grow zones across the planet will shift as the climate changes. North Africa will become a major food producing zone. For the science behind it refer to Valentina Zharkova’s works and the sun’s double dynamo effect on our climate. For info on current events refer to David Dubyne’s Adapt 2030 channel. To put things into perspective, it won’t be until after 2055 before we will enter into a 300-year warming cycle. Good luck, we will all need it.
Reply
Leave a Comment