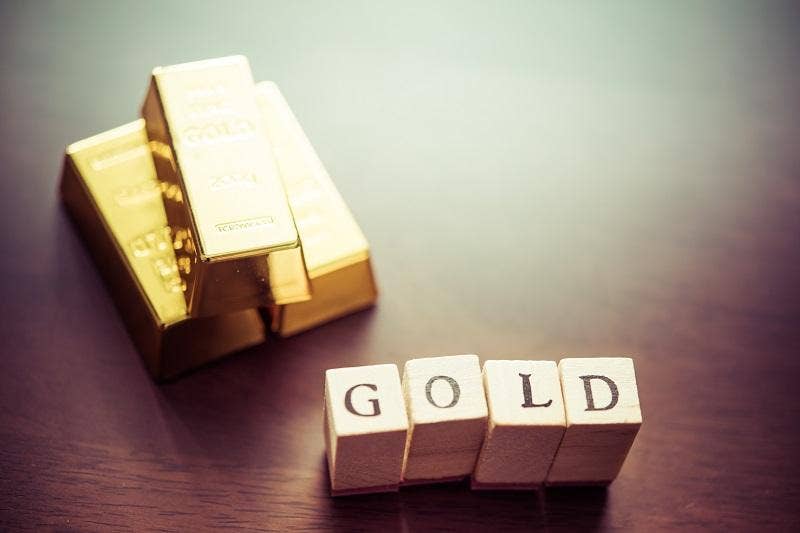 Gold is setting the pace for the rest of the sector. It has been setting higher lows since the August bottom at 1675. Now we finally have a higher high above 1837. 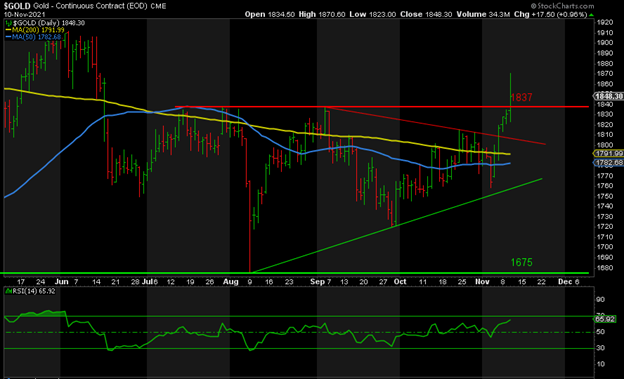 The passage of Biden’s infrastructure spending bill and the announcement of the Fed’s taper have supported this move. A case of sell the rumor, buy the fact.

Real yields are back to record lows, with the 10-Year reaching -1.19%. Although yields are going up, inflation expectations are rising even faster.

The fact that Gold continues to rise while the dollar sets new higher highs since the peak of 104 in March 2020 is also encouraging. They typically go in the opposite direction.

In summary, everything is looking good for Gold and the rest of the sector. But while I remain long and would never short a bull market, there are some concerns to be aware of.

As Rick Rule once said, and I’m paraphrasing, Gold doesn’t rise because of a crisis, it rises due to the Fed’s response to a crisis. When stocks dumped in 2008, 2018, and 2020, the Fed responded with more money printing, and Gold soared. But on each occasion, Gold did fall with stocks initially. Stocks haven’t fallen this time around—at least not yet. I don’t believe that stocks can last too long without increasing amounts of stimulus being injected into the markets, and it’s only a matter of time before they submit, just as they did in 2018 following QT. When that happens, perhaps Gold sees the writing on the wall and continues higher, or history repeats and it goes down with everything else initially.

The point being that until we get the drop in stocks and the ensuing Fed response of stimulus on steroids, there is the risk of a sharp move lower first. 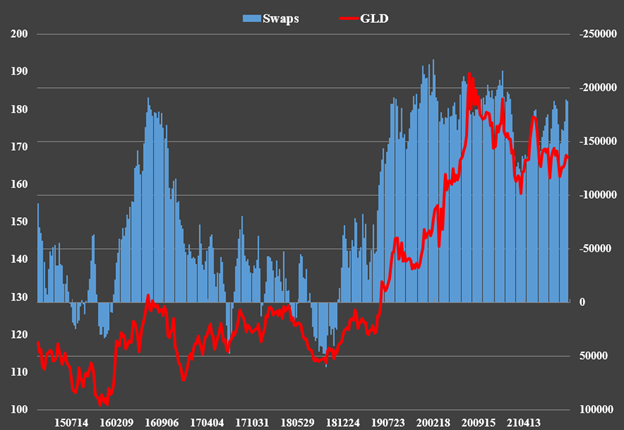 History shows that when the Banks are short and in size, they’re almost always right. Gold falls. While this time could be different, the odds strongly favor that they are right yet again.

There is also a plausible scenario where Gold falls to a positively divergent lower low, below 1675, before takeoff. This marries well with the expectation of a sharp fall in stocks, which would precipitate the drop. 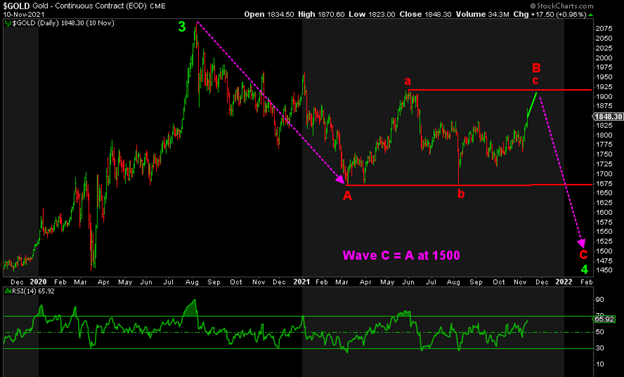 1920 is the key. If that breaks and we close above there, then it is highly probable that the low is in and we’re on our way to new record highs. However, if Gold fails to get through 1920, then a drop below 1675 is back on the table. A break back below 1830 would increase that probability significantly.

Finally, I am not convinced the bottom is in from a sentiment perspective. Look at the rebound off the bottom in August at 1675. That is not the response you would expect post capitulation. When everyone is fed up and many have thrown in the towel, it is typical to see a slow grid higher first, then blast off. This is because everyone but the strongest hands have folded and simply don’t believe it will ever go higher. This time around, it was the opposite—people piled in enthusiastically. This was NOT capitulation. 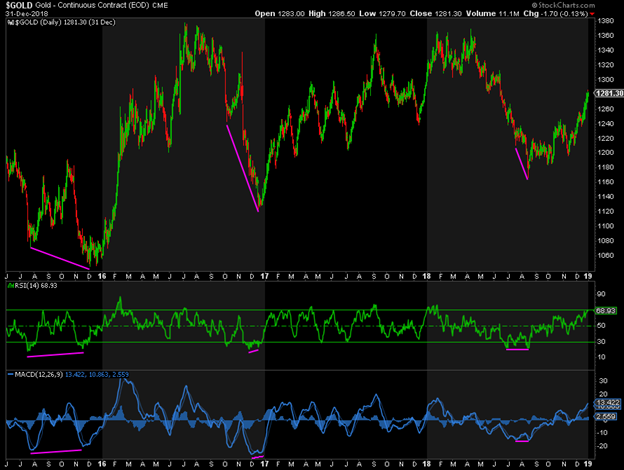 In July 2015, Gold hit a low of 1072. Extreme oversold and extreme bearish. Many thought it was the low, and we got a sharp rebound to 1170 just a month later, followed by a higher low and then a third wave up to 1192 in October. All-in-all, a gain of 11% before falling to a positively divergent and capitulatory low at 1045 in December. The majority were wiped out to the point of apathy. They simply didn’t care anymore. “Then” Gold took off and we never saw that level again.

A once off? No. Just a year later, the same thing happened. In October 2016, we hit a low of 1243. Extreme oversold, extreme bearish. Then it rebounded just a month later to 1338 on November 9. A gain of 8%. Many thought the low was in. Then down we went to a positively divergent lower low of 1124 in December. The majority threw in the towel, and then Gold soared and 1124 became a historic footnote.

The same thing happened in 2018. Following its peak at 1370 in April, everyone thought the low was in, including myself, at 1211 on July 19. Extreme oversold, extreme bearish. Gold bounced somewhat, then proceeded to fall to a positively divergent lower low at 1167 in August. Gold rallied once more, and we never saw that level again. 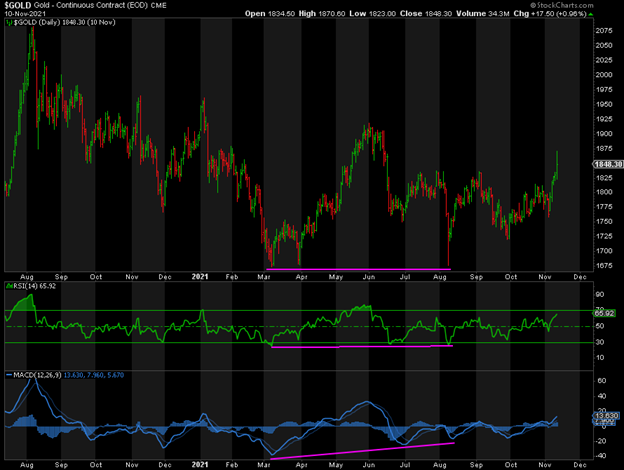 Following its drop from a record high of 2089 in August 2020, Gold began an elongated decline to 1673 in March 2020, bounced to 1920, and then down to a positively divergent triple bottom at 1675 in August. This could have been the low, but it wasn’t a lower low. Furthermore, we only have three waves off that bottom so far. However, if we do break 1920 and complete five waves up in the process, then the bottom is in place. Alternatively, my ideal scenario would be a positively divergent lower low below 1675 and then up we go. The Banks’ positioning supports such an outcome, but I must admit that this is a coin toss right now.

In summary, while I remain cautiously optimistic, we need to take out 1920 to confirm the bottom is in. Until then, the risk of a drop back below 1675 remains possible, especially ahead of the inevitable dump in stocks that has typically dragged down metals and miners before. And let’s not forget that the Bullion Banks remain heavily short, which casts a shadow over this rally. That said, the trend is your friend until it isn’t, and never short a bull market. Within months, if it has not already begun, Gold and the rest of the complex are going to take center stage as the Fed runs out of road for its can-kicking policies. Following the next stock market sell-off, get ready for even higher inflation or even hyperinflation courtesy of the Fed’s response, aided by fiscal stimulus too. Game over. Gold wins.