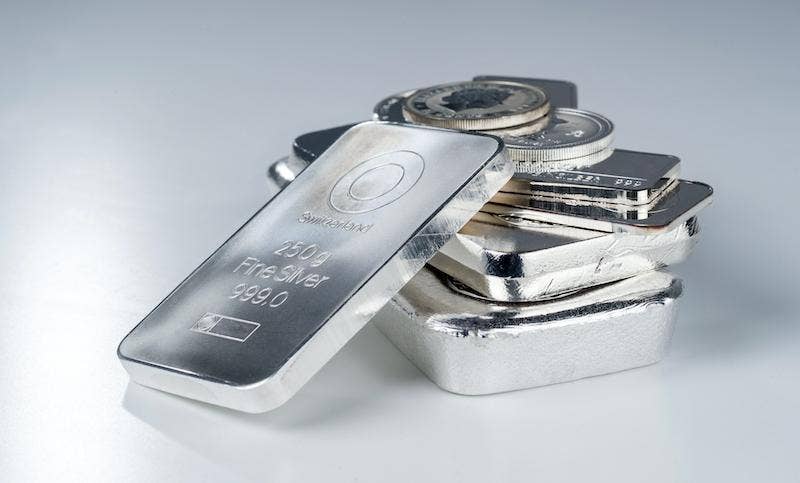 Last week, I covered Goldman’s purchase of the Perth Mint’s ETF. The latter allowed holders of the ETF to readily convert their shares into physical Gold. While Goldman kept most of the characteristics of that ETF in place, it changed the key one—that physical convertibility. Now it’s just like any other ETF. Why, and why now? Perhaps because the Perth Mint is running out of the physical metal or Gold is just becoming more scarce in general. Perhaps Goldman wants to delude the peasants into thinking they own Gold when in fact it is just another cash-settled ETF that tracks the price of Gold. One thing is for sure, Goldman would not be buying an ETF if demand was going down just to earn a paltry 0.18%. Simply put, this is bullish Gold medium and long-term, imho.

This week, we learned that the Chinese state-owned company Shandong Gold Mining tried to buy TMAC Resources’ gold mine in Nunavut, Canada. The Canadian government blocked the deal, but the key takeaway for me is that China is still in the hunt for more miners of precious metals at a time when Gold is at its lowest level for months. This is yet another bullish signal for Gold, etc. once this reversal is finally complete. Furthermore, the Chinese play the long game, so such acquisitions suggest precious metals and miners have a lot of runway to the upside in the years to come.

After four months of waiting, we also got an agreement between Congress and the Senate on new fiscal stimulus. While the size of the stimulus was a disappointment, this clearly indicates that the gridlock is over and we can expect more stimulus ahead. We all know what stimulus coupled with massive QE from the Fed did for Gold post the March lows.

Another reason for the rally post March, especially in prices for the physical metals, was the closure of mines and refineries due to Covid 19. Well, if the latest news is to be believed, there is growing risk of a more infectious and perhaps more deadly mutation of the virus. Call it ‘Covid 21’. If Covid 19 triggered closures that caused a sharp drop in the supply of the metals, it certainly could happen again given a more infectious and deadly strain of the virus.

Taken together, this reinforces my long-term view that precious metals and miners could go stratospheric in the years ahead and possibly to new record highs across the board once we bottom out here. 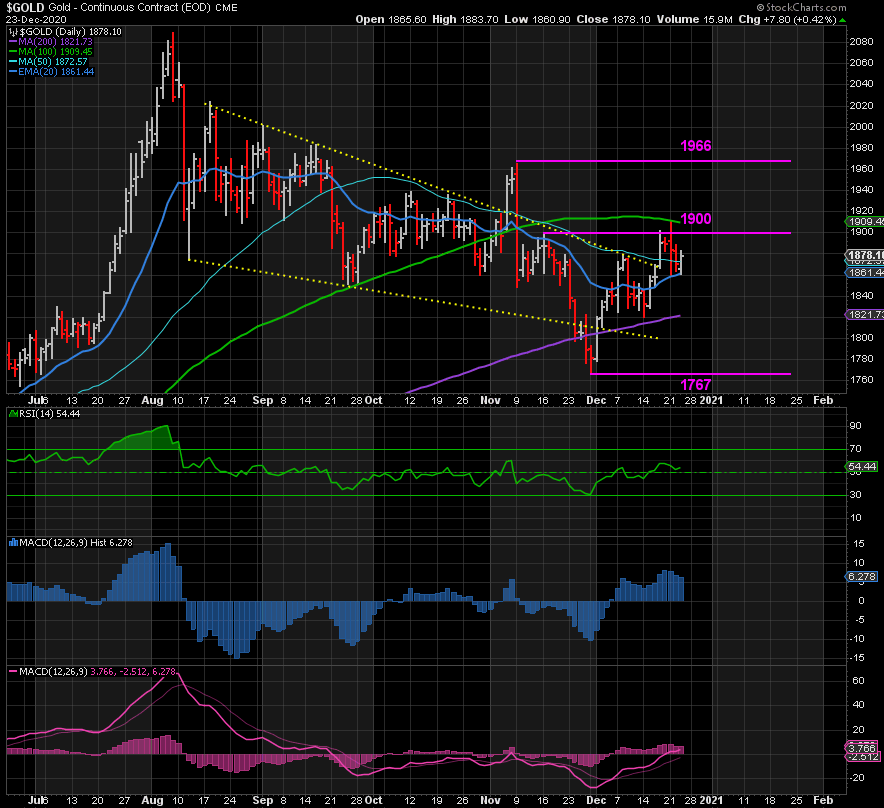 Gold is setting higher lows and higher highs in December. The trend is clearly up in the very short-term. However, we’re still very much in a downtrend since the peak in August. Gold is now sandwiched between the 20-day moving average at the pivot level of 1860 and the 100-day moving average in green above. We have not closed above 1900 either. The MACD Line is trending higher and has broken back above zero, which is encouraging. But until we take out 1900 convincingly with confirmation above 1966, the risk of a lower low still remains. Support is 1860 and below there at ~1820 and the critical 1767 level. 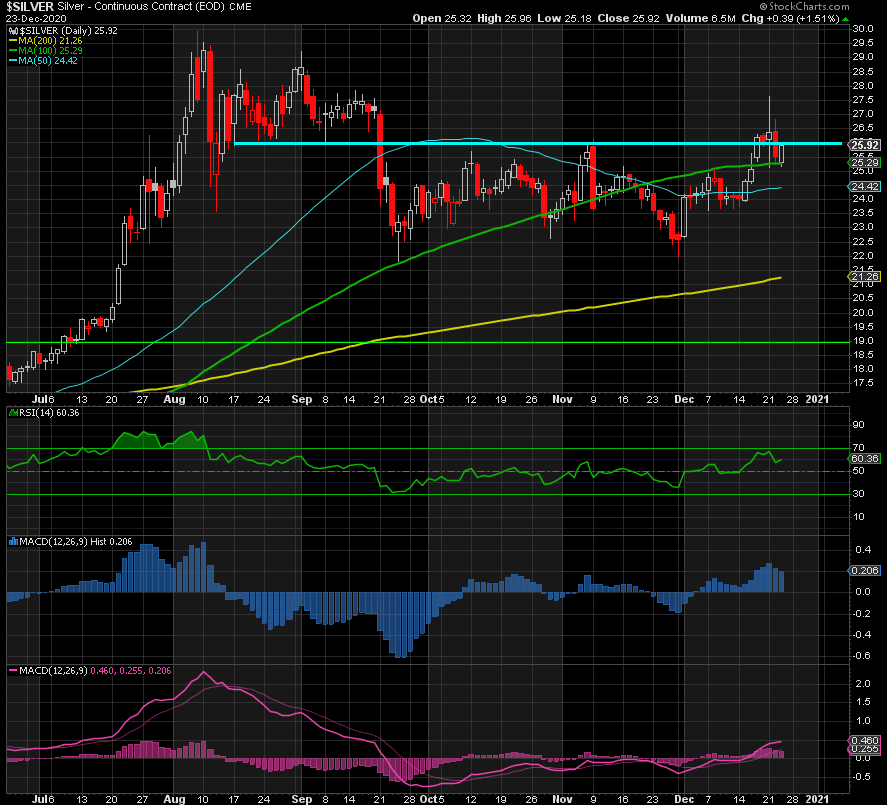 Silver looks far more promising than Gold. It has never even tested its 200-day moving average, has a nice double bottom in place, and recently set its highest level since September, where it became extreme overbought short-term. While the 100-day moving average is acting as support right now and the MACD is trending higher, I don’t rule out another test of 23.50. A break of the recent high at 27.60 and the Silver train has likely already left the station with a possible new record high ahead.

Regardless of when and where we bottom in the short-term, the bigger picture for Gold and Silver remains extremely bullish in 2021, imho.

I sincerely wish all of you as merry a Christmas as possible. We should always look out for one another, but never more so than now and in the years ahead.