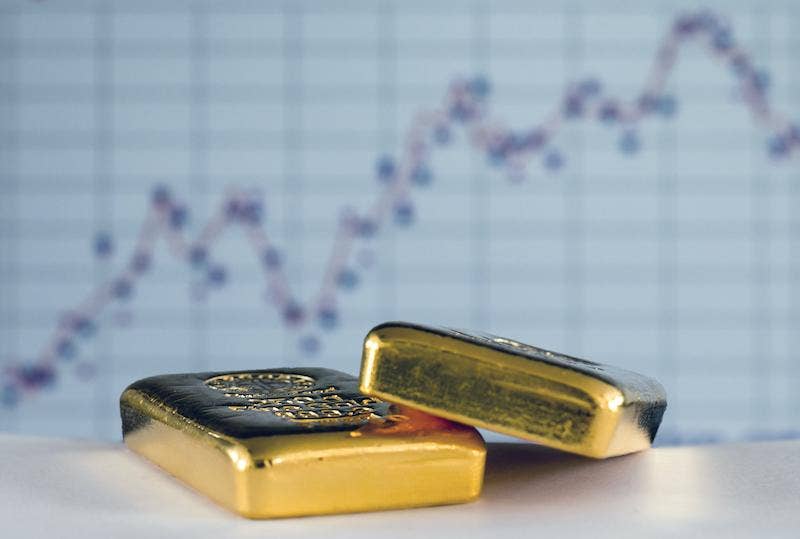 “If progress continues broadly as expected, the Committee judges that a moderation in the pace of asset purchases may soon be warranted.” - Source

“Powell: Taper Announcement Could Come as Soon as the Next FOMC Meeting” - Source

“FED'S POWELL: INFLATION IS ELEVATED AND WILL LIKELY REMAIN SO FOR MONTHS, BEFORE MODERATING” - Source

“POWELL: FED WILL HAVE COMPLETED TAPER BY MIDDLE OF NEXT YEAR” - Source

Suffice to say that despite the out he gave himself with respect to ‘progress’ continuing broadly, Powell put a taper of the monthly $120 billion in liquidity (i.e., money printing) squarely on the table over the next two months, whether it actually happens or not. Financial markets are dominated by liquidity. Without it, they would collapse. Hence, as always, the trigger for the dump in stocks will be a contraction in liquidity. Say hello to the taper.

The only surprise on Wednesday was the fact that stocks rose on the news. How do we explain this? Stocks fell going into the FOMC and rebounded thereafter: a classic case of “sell the rumor, buy the fact.” Does this mean the downside is over? Not necessarily. 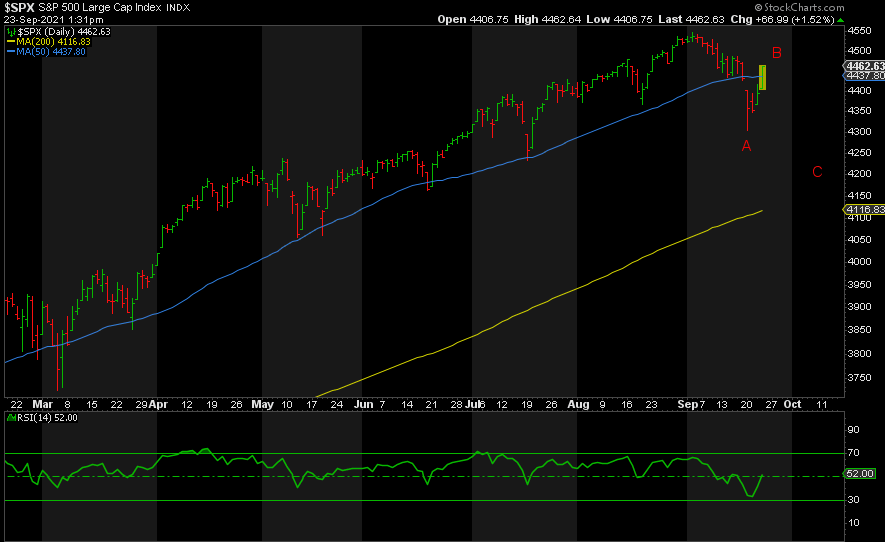 Corrections typically occur in three waves, ABC. The decline into the FOMC looks like A, followed by the B bounce, with C still to come. It is the C wave down that will likely lead to the Fed’s abandonment of its taper policy or, post implementation of said policy, cause yet another abrupt Fed 180 to more money printing on an unprecedented scale. The alternative is systemic collapse. The C wave will of course justify the Democrats’ fiscal stimulus of $5 trillion also. Red October is coming.

Meanwhile, precious metals and miners continue to get clubbed with the obvious assistance of the Bullion Banks, regardless of whether the dollar rises or falls, again using the FOMC as justification for such moves. But this is just setting up the massive rally to follow once that liquidity waterfall hits the next time stocks dump.

In the meantime, Gold remains under pressure. 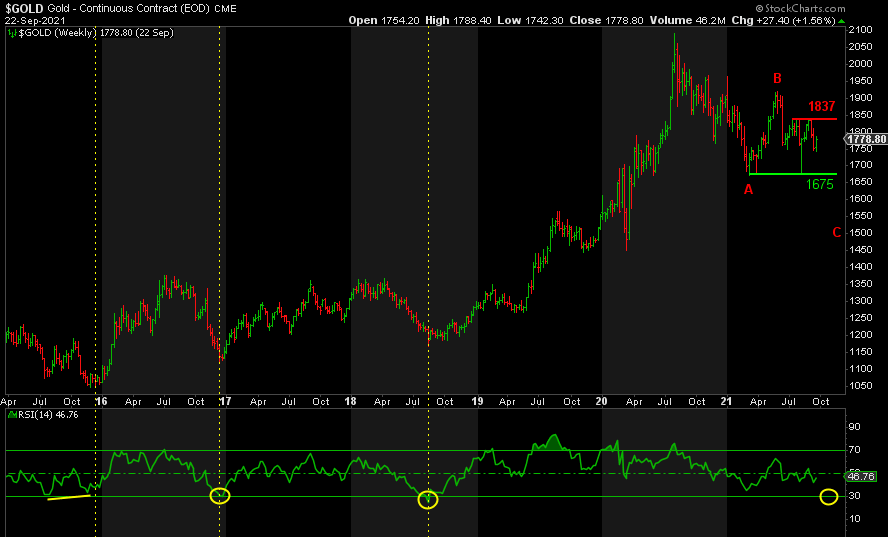 Unless Gold can break resistance at 1837, the risk remains of a break of key support at 1675. Should that occur, a perfect ABC correction where wave C = wave A in size would target ~1500 for the bottom. As I’ve said before, prior major lows coincided with a weekly RSI of 30. While not necessary, we’re still a long way from that at the current level of 46.

That said, I believe we’re far closer to the bottom than we are to the next peak.

Silver continues to try to hold the 22.30 level. Although it closed below it on Monday, it is closing the week higher. Yet, it still remains at the precipice. 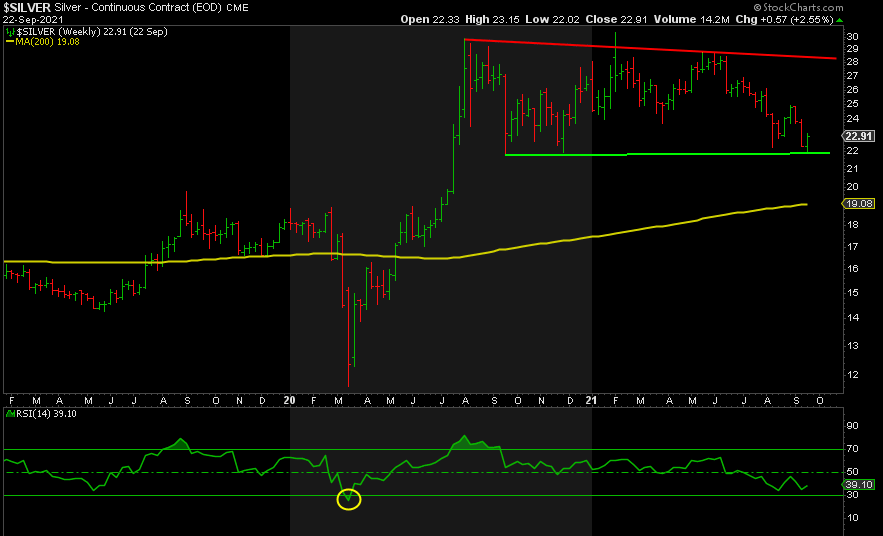 The fact that the bounces following each test of 22.30 are getting smaller and smaller after four tests strongly suggests that the next time we break down, a lot of stops below 22 will be liquidated and we could get the capitulation down to 18. Alternatively, we break key resistance on the upside at 25 and head towards 30.

GDX is in the same boat as Silver, hanging on by a thread above 30.

We’re seeing the same number of tests and weaker and weaker bounces after each, just as in Silver. Therefore, a break below there opens up a move down to “at least” 25 next. A break of the prior high of 33.50 would go a long way to negating any further downside. But where we stand, I’m leaning bearish in the short-term. The market, and especially the Bullion Banks, will want to clear out those stops before allowing any meaningful rally to occur.

Lastly, eliminating all of the noise on the daily and weekly charts, I turn to the monthly chart for SILJ. 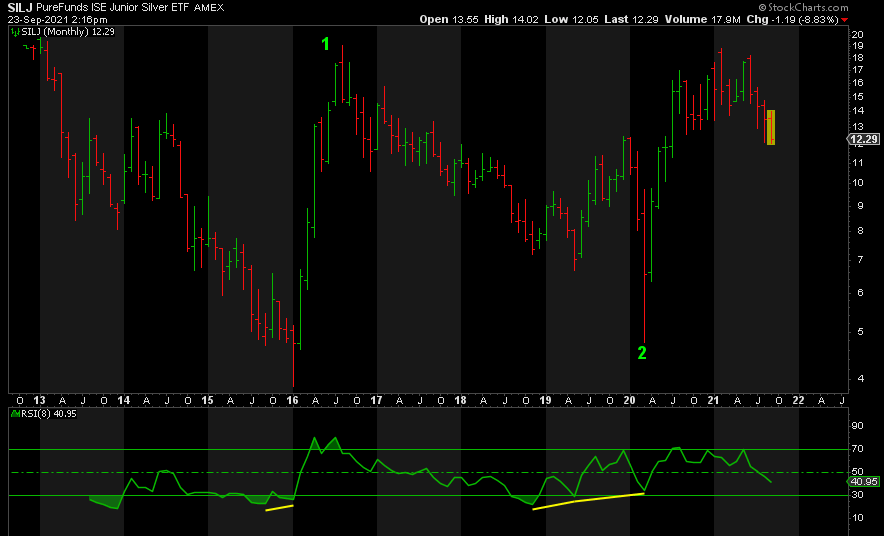 It, too, is desperately trying to stay above 12. Based on the RSI at prior major lows in SILJ, it has a lot of room to fall before reaching a bottom. Possibly as low as 8 or 6.77. Key resistance remains at 14.

At the end of the day, I still remain extremely bullish on precious metals and miners. Like many of you, I am just waiting for the final flush lower across the complex to be followed by a massive rally to new record highs, driven by a sharp drop in stocks and the fiscal and monetary insanity in response.