Gold Likely Not Done on the Downside Yet 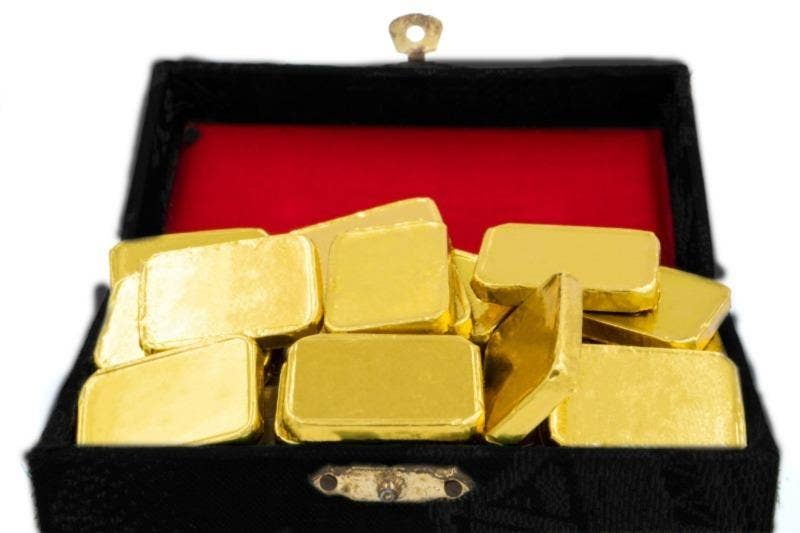 Gold, Silver, and the miners have taken a hammering since the peak in Gold at 2003 on April 18. Many blame the Bullion Banks, and they are certainly a factor here, but there were warnings from several traditional indicators that this dump could occur. 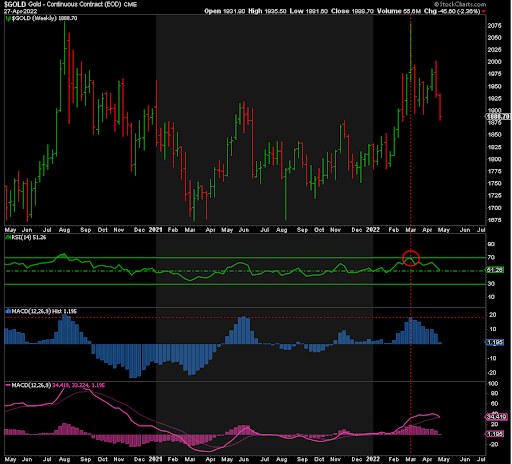 There were several signals that a peak was probable:

Since that peak, these indicators have just been trending lower and lower, despite the pop in price to 2003 on April 18. This in and of itself suggested we had lower to go, and we have seen how that has played out.

Now the weekly MACD Line is testing its signal and the MACD Histogram is on the verge of falling below zero. This may provide a short-term bounce, but until price suggests otherwise, the trend remains down for now.

So what triggered the peak on April 18? Perhaps Fibonacci can tell us. Below is the daily chart for Gold: 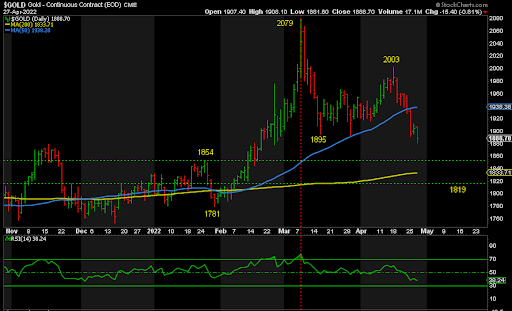 Interestingly, for the peak of the ensuing bounce to 2003…

How low does Fibonacci suggest we could go? If this is a standard A-B-C correction, where wave C is the same size as wave A, then ~1820 would be the primary target:

Looking to invest in physical gold? Check out our collection here.

However, if Gold falls below 1781, then it could reach 1700 or lower before turning up again. But let’s cross that bridge if and when we come to it. My primary target on the downside is around 1820.

Other signals that suggested a peak was coming were sentiment and COT positioning. Sentiment was extremely bullish at 2003, which is typically a great contrarian indicator, especially in precious metals. While that bullish sentiment has receded somewhat, we’re nowhere near capitulation levels. We don’t need to go that low, but it’s possible. It certainly allows for further downside.

Now for COT positioning and the Bullion Banks. This chart says it all: 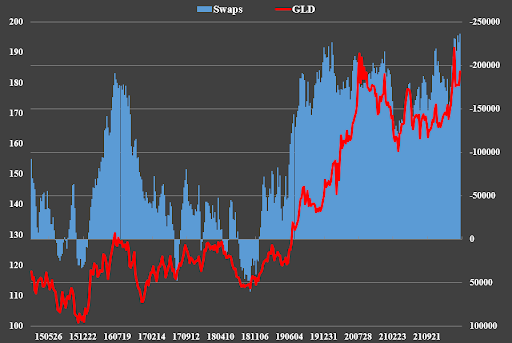 The “Swaps” or Bullion Banks were recorded short at the peak of 2003 on April 18, even more so than at 2079 on March 8. The rest, as they say, is history. Only now, as the price is falling, are they covering their shorts. But they have a long way to go before getting anywhere near zero.

Last but not least, real yields were clearly a warning. 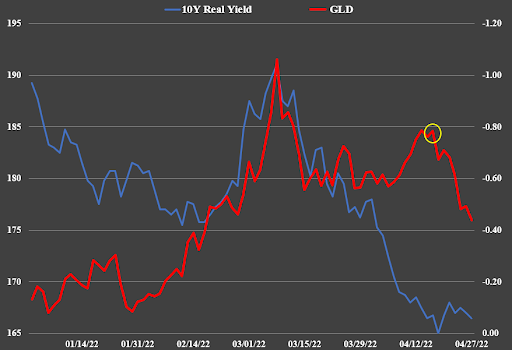 Gold and real yields have a near-perfect inverse correlation over the long term. When real yields rise, Gold typically falls, and vice versa. While the relationship often breaks down in the short term, ultimately it reconnects. Gold did not fall as real yields bottomed out in March and soared to their highest level since March 2020. Either real yields had to fall again or Gold did. It’s now clear that Gold would take the fall and still has further to reconnect with real yields.

In conclusion, Gold may be overdue a bounce here, but the balance of data suggests it has lower to go yet. My primary target is 1820, but I will wait for it to stop falling and break resistance to ensure that the bottom is in. In my opinion, this is all being driven by the Fed’s tightening policies, and it is when they have to pull another 180 to stimulus on steroids—or before—that Gold, Silver, and the miners take off to new highs. It’ll be worth the wait!