Gold Not Out of the Woods Yet 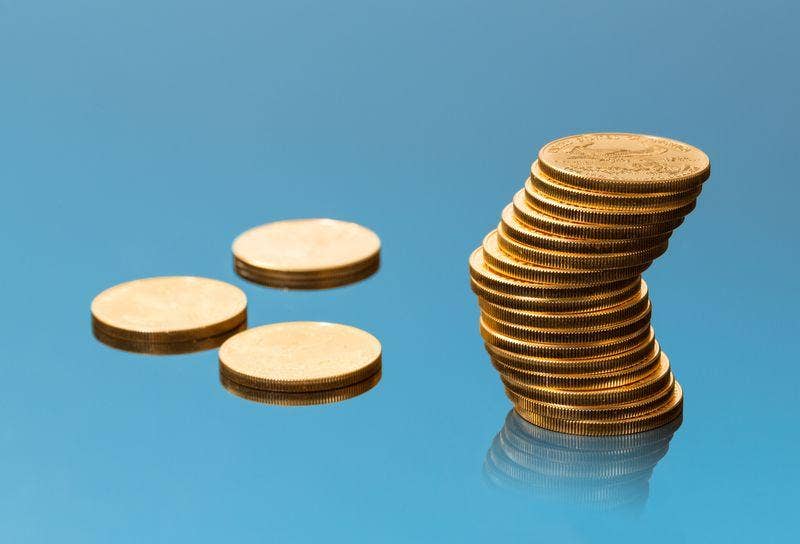 Many attribute the rise in precious metals and miners to the high CPI numbers this week. The truth is that although the numbers were high, they were more or less as expected and the same as the month before. The fact is that GDX bottomed on September 29 and Gold, Silver, and SILJ followed on October 5. What provided the catalyst for the surge in precious metals and miners on Wednesday was the peak and fall in the dollar and the dump in real yields.

The following chart, courtesy of Craig Hemke, shows that the extreme overbought, negatively divergent dollar ran into major resistance at 94.50 and began to fall: 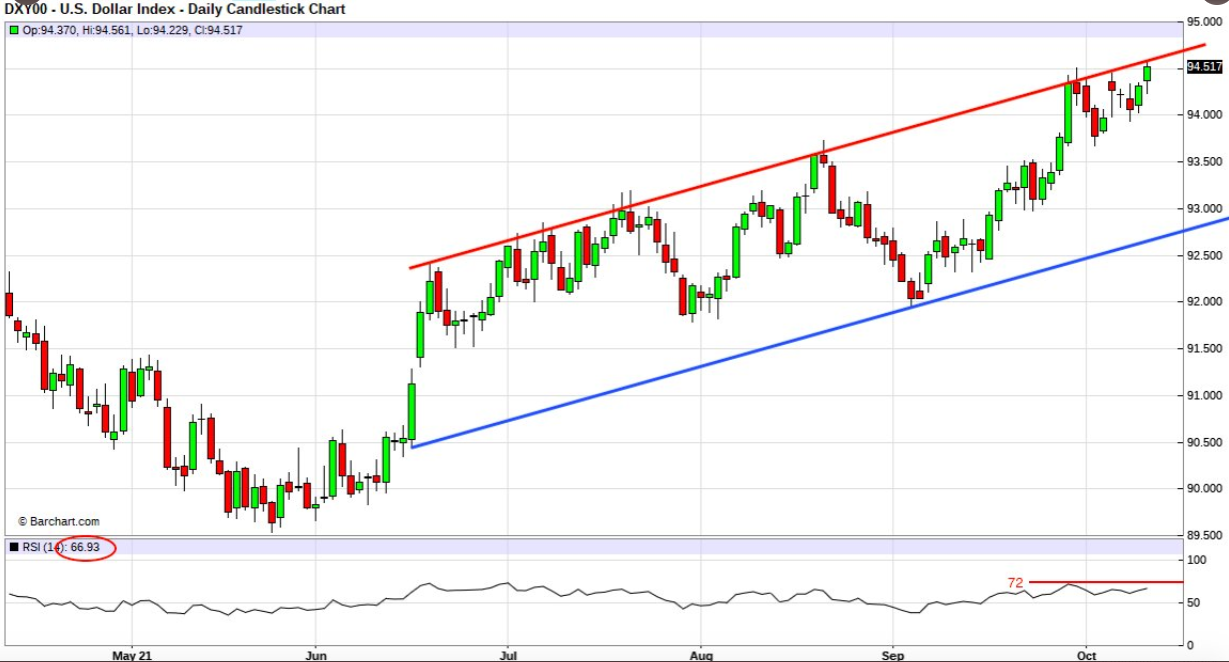 The combination of these factors were the primary drivers of the spikes in precious metals and miners, imho. The bigger question is where do we go from here? 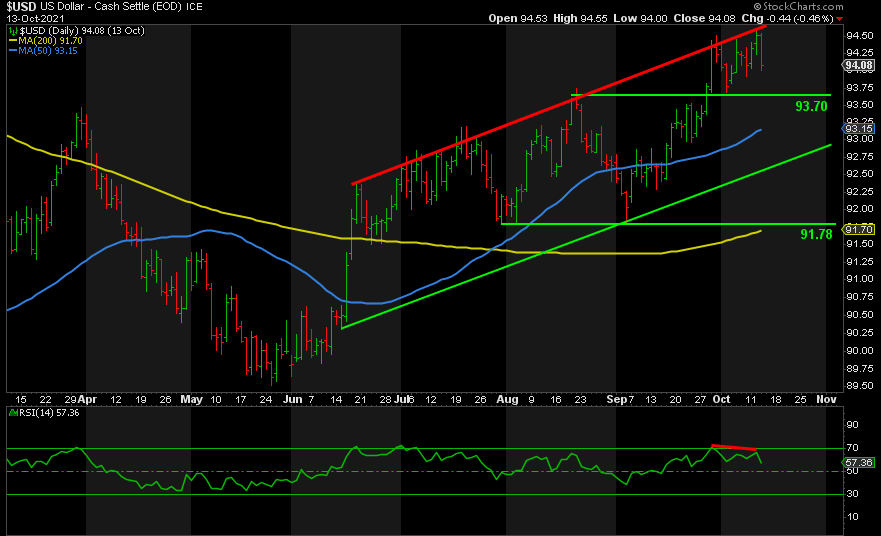 The move down to 93.70 today could mean that the drop in DXY is already over or there is a positively divergent lower low still ahead.

The key point is that the DXY has not seen its peak yet, imho. I still see a higher high to ~96.50 before the DXY collapses again.

If the inverse correlation to metals and miners continues, this means that they have already reached the peak of this bounce or have one more higher high to come. Let’s look at the various assets to determine where those levels may be. 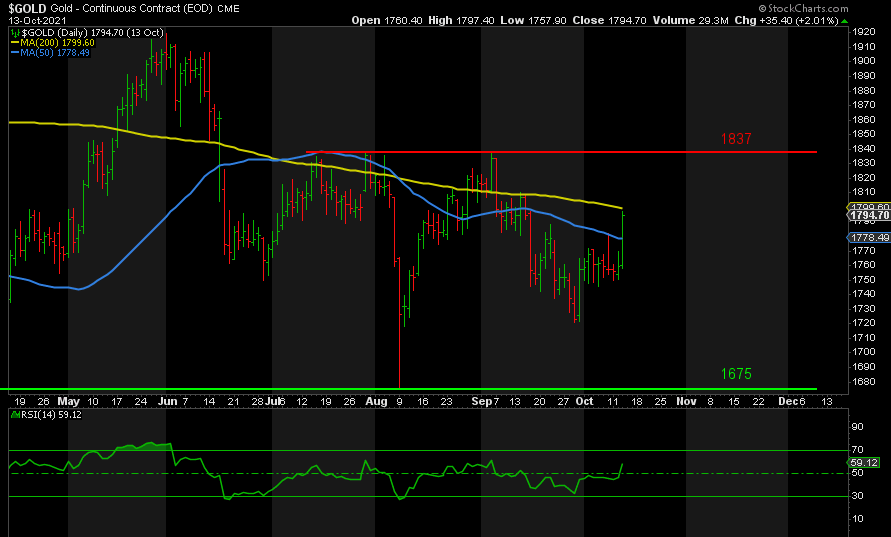 Honestly, whether we top out at 1800 or 1837, my ideal scenario remains that Gold heads back down to a positively divergent lower low below 1675, coinciding with a peak in the DXY at ~96.50, then Gold explodes higher.

The preferred timeline for the peak in the dollar will coincide with the $5 trillion increase in the debt ceiling and the passage of Biden’s stimulus plans, imho. This means we could have to wait until December or January for this to occur. 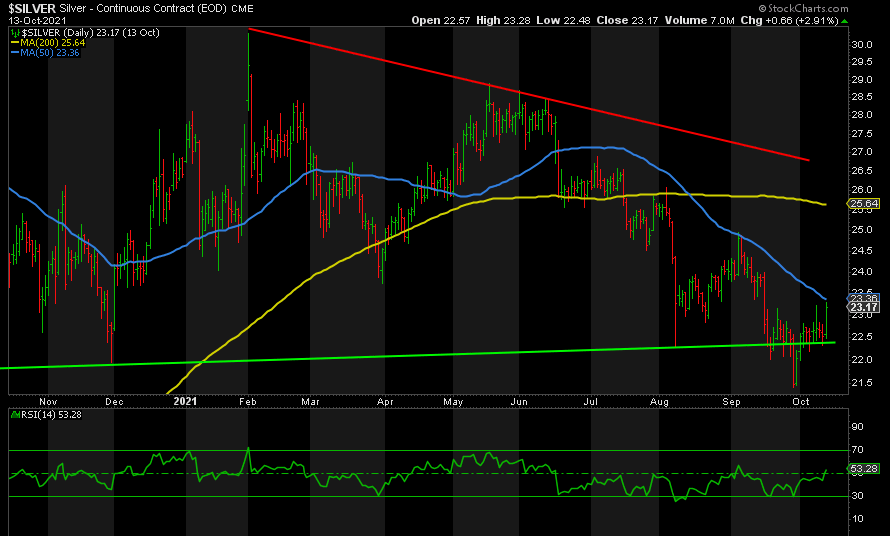 Silver has broken key resistance and the 50-day moving average at 23.36 today, but it needs to close above there for at least a couple of days to be a valid breakout. If it does hold, a move up to the prior high of 25 and the 200-day moving average is possible. Whereas a failed breakout to the upside and a break back down below 22.40 and the low of 21.41 signals a drop to 18. 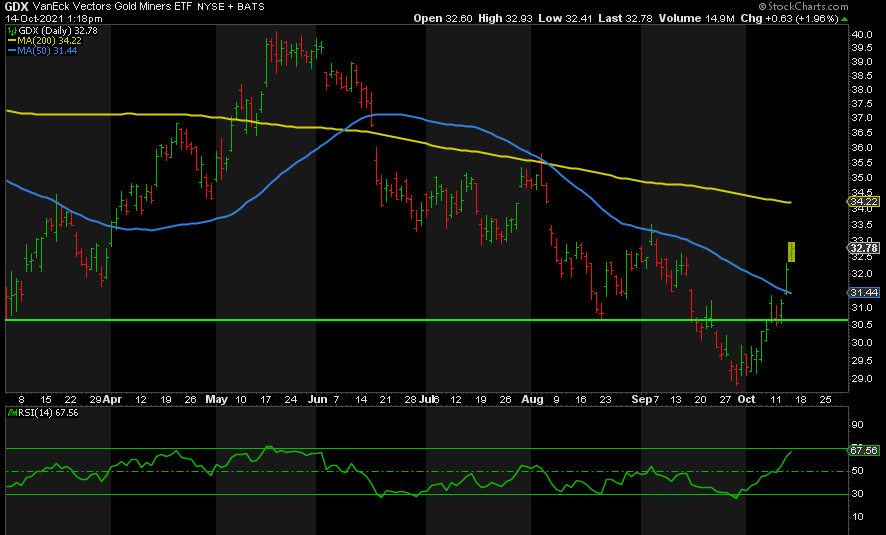 It is no surprise that the most battered miners are performing best in this rally off the bottom. GDX has blown through its 50-day moving average. However, it has still not hit a higher high above 33.52 in September. It is also becoming extreme overbought. In order to get truly bullish about this move, we need to see a higher high followed by a higher low above 28.83.

By contrast, a drop back below the 50-day MA and the pivotal 30.50 level could get ugly, especially if we take out the prior low. 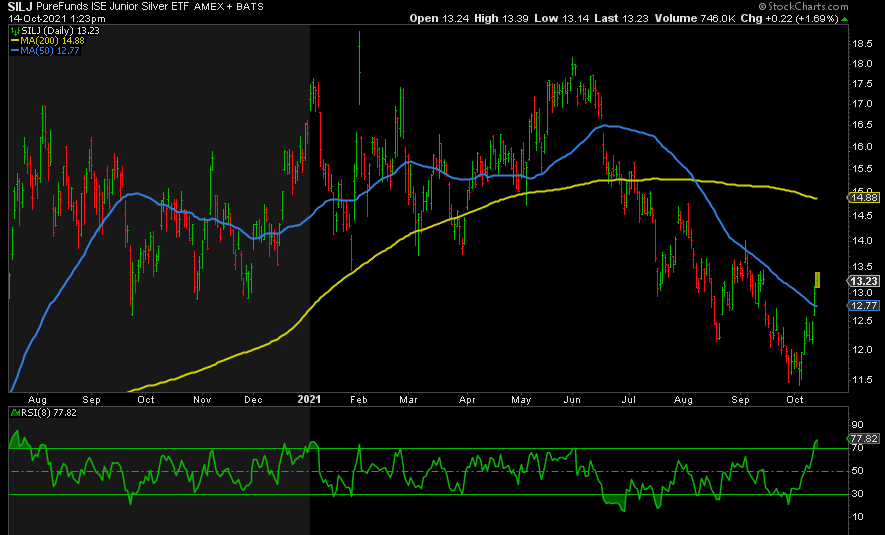 The most battered of them all, SILJ, has jumped almost 20% off its low of 11.41 less than two weeks ago, and like GDX, has taken out its 50-day MA. But also like GDX, it has yet to make a higher high above 14, and until it does, we cannot get too excited about this move. A higher high followed by a higher low would turn the trend up, and then we can load up for far higher prices ahead.

In conclusion, while the dollar may have further to go on the downside, I do not believe the peak is in and therefore remain cautious regarding the prospects for metals and miners in the next couple of months. Of course, I could be wrong and I hope I am, but until I see the metals and miners set higher highs and higher lows, I’ll remain cautiously optimistic.