Gold Sold on the Rumor of Disinflation. Buy the Fact. 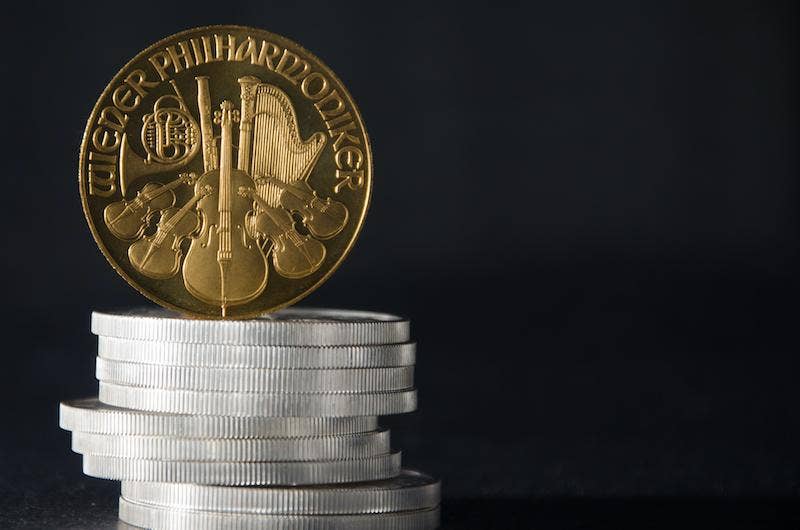 Gold remains mired around 1800. Silver has fallen back to a 24, its lowest level since April, prior to the rebound today. GDX is in the 33s, a level not seen since April 1. SILJ briefly fell below 13 for the first time since September last. The DXY just tagged its highest level since April 1 but is negatively divergent on the daily chart. The 10Y yield fell to 1.13% this week, its lowest since February. Oil fell 16% in three weeks this month. Lumber prices fell over 70% in May. Bitcoin back below 30k. What could be the common denominator in all of these moves? Perhaps the market is now pricing in disinflation, at least in the short-term.

Three weeks ago, I wrote: “if you are focused on the big picture, it’s inflation now, with the potential for hyperinflation to follow soon after. It’s not transitory. The deflation in between was just a blip on the chart.”

I also cited the widespread weakness in economic data and several other factors: “The economy is slowing. The reopening is already priced in, and any further benefit is diminishing fast. Fiscal stimulus is waning rapidly, with just 20% of existing programs left to spend. Emergency unemployment benefits are expiring in September. The decline in the jobless rate is solely due to the falling labor force participation rate.”

Now we can add the potential expiration of the forbearance on mortgage payments and its potentially negative effect on the housing market; the massive jump in reverse repo activity with the Fed; rising cases attributed to multiple Covid variants; the risk of renewed lockdowns and possible social unrest as a result.

All of this supports the premise of at least a short-term period of disinflation whereby prices continue to rise but at a slower pace. The rate of change in headline and core CPI numbers also appear to further substantiate this thesis. Note that the rate of change in the increase in both numbers on a year-over-year basis is slowing, especially in the headline number: 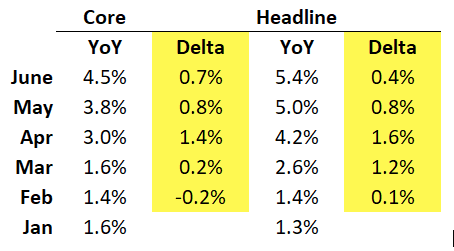 The indication being that the CPI will peak in the next month or two or perhaps even fall.

While the Fed may claim they were right all along, despite recent comments that inflation may be higher and of longer duration than they previously anticipated, any such disinflation is likely to be short-term in nature, especially if stocks join the party in a big way and start to fall. The Fed cannot allow the stock market to fall too far without risk of an all-out crash and the collapse of everything. Unless that is their goal all along, they will be willingly forced to unleash “monetary insanity on steroids” to not only prop up stocks but push them even higher. Something I forecast back in 2016. With Mid-terms coming up in 2022, the Democrats can’t afford a crash in stocks or the economy either. Expect fiscal stimulus on steroids also. Such actions would typically send bond yields through the roof, but given the existing and rapidly rising deficits and debt, such yields would have to be capped to avoid interest payment costs becoming greater than total tax receipts, the epitome of insolvency. The dollar would most likely tumble, and with yields capped, foreign buyers would either stop buying U.S. treasuries and—worst case—sell what they still have given the losses they would incur in real terms. The Fed would be forced to buy everything, further weakening the dollar, increasing inflation pressures, and cause real yields to plummet. All of which is only good for Gold, Silver, and the miners.

In summary, the risk “in the short-term” is that rising expectations of disinflation could weigh further on precious metals, unless of course the risk of disinflation is already fully priced in. But as Rick Rule pointed out in April 2020: “Precious metals rise not because of crises but because of the policy responses to those crises (i.e., liquidity).” If the Fed and the U.S. Treasury respond with even greater amounts of liquidity than that which we saw following the plunge in March 2020 and in the Great Financial Crisis of 2008, then it is not only reasonable but a virtual certainty that precious metals and miners will soar to far greater heights, perhaps new record highs in all.

Final thoughts: Back in 2008, Gold bottomed at $681 on October 24 and Silver bottomed, too, four days later. The Fed did not announce QE1 until November 25, one month later. The point being that Gold is likely to bottom out and begin its rally once the market even senses that the Fed will be forced to respond in the near future, and that is likely to occur as always when stocks correct at least 10% or more. Gold rallied almost 3x from $681 before it peaked above $1900 in 2011. Silver rose 6x from $8.40 to over $50 during the same period. Given that this may be the last hurrah for the Fed and the stock market—and the sheer volume of liquidity that may be unleashed—the gains could be even greater over the next couple of years. Even more so for the miners. First Majestic rose 27x from $1 to $27 from 2008 to 2011. Food for thought when everyone is so demoralized by the declines since last August.