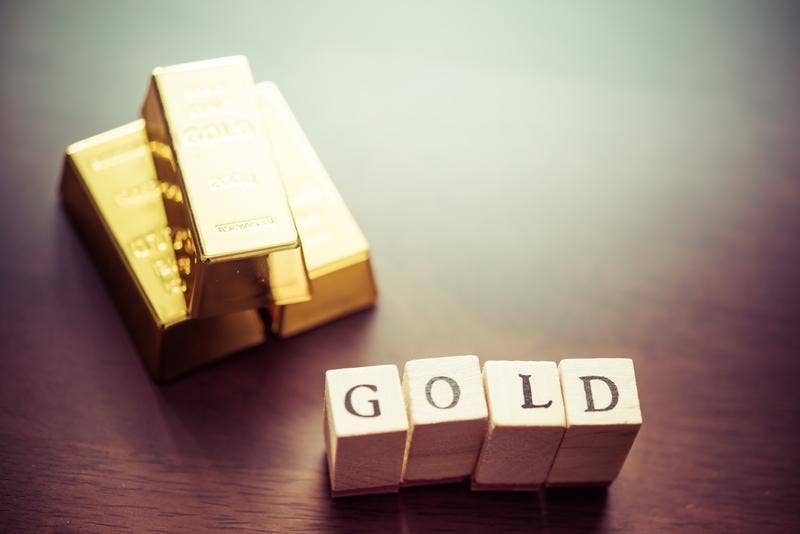 By now, it's a fait accompli that the FOMC will announce a QE taper schedule on Wednesday at the conclusion of its November meeting. How the COMEX precious metals react to this news will likely set the course for the remainder of 2021.

First, you must understand that what the FOMC announces on Wednesday will not be "news". Various Fed presidents have foreshadowed these changes since early August. And what will those changes be? The Fed will begin reducing its current $120B/month debt monetization plan (QE). They'll trim $15B/month off the total over the course of eight months with the goal to be at zero by August of 2022.

The only actual "news" on Wednesday would be if this was NOT announced or somehow pushed back. Mainstream financial media will also try to create news out of any slight changes to the Fed's "dot plot" of interest rate expectations, but other than that, everything else is pretty well known ahead of time and has been for months.

So how will the COMEX precious metals react to the news? They've certainly been selling off on the "rumor" for the past 90 days. Will they now "buy the news"? Maybe.

However, the market-dominating bullion banks have already shown their cards over the past two weeks. On each rally, The Banks have acted aggressively to cap price and reverse it before any upside momentum could take hold. And how do they do this? The same way they always have...by diluting the float of existing COMEX gold contracts.

The Banks have propagated this scam for years, but if you're unaware of how it works, here's a link to something I posted to my TF Metals Report site back in 2017. The post uses COMEX silver as an example, but the dynamics are the same today in COMEX gold: https://www.tfmetalsreport.com/blog/8252/econ-101-silver-market-manipulation

For a current example of how this works, let's review the way The Banks have recently added COMEX gold open interest on price rallies and then bought back and covered those same shorts on subsequent price smashes. First, check the chart below. Note that since October 21, all of the major flushes of price have come with concurrent surges of trading volume. 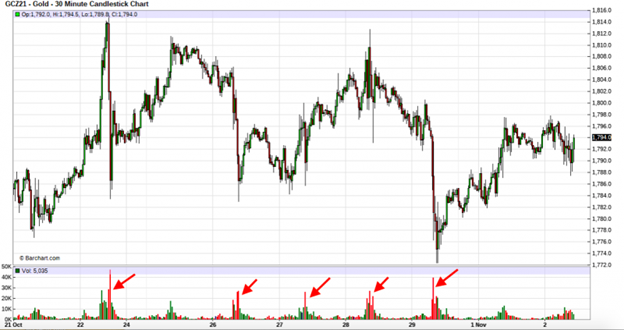 And now let's check the price and open interest changes over the same time period.

Monday, October 25: Price rallies another $10.50 and The Banks add another 9,981 contracts to the mix. Total COMEX gold open interest now stands at 516,389 and The Banks have now diluted the float by nearly 30,000 contracts in two days. That's the creation of nearly 100 digital/pretend metric tonnes.

Tuesday, October 26: Price is smashed in COMEX trading. Speculators sell some of their new COMEX gold contracts. This allows The Banks to buy back and cover some of their latest shorts. The open interest gets retired and falls by 6,595 to 509,794 contracts.

Wednesday, October 27: Price recovers $5.40 and rises gradually after an early COMEX smash. That early smash of selling allowed The Banks to buy back and cover some shorts. Total open interest declines by 712 contracts to 509,082.

Thursday, October 28: Price rallies early in the COMEX session, breaches its 200-day moving average, and threatens new highs versus the previous Friday. The Banks respond by aggressively capping price and driving it backward through the issuance of another 7,888 COMEX gold contracts. The total open interest now stands at 516,970.

Friday, October 29: Price is smashed for $18.70. Speculators rush to sell some of the very same contracts they had just purchased days before. The Banks take the other side of the trade, buying back and covering some of their ill-gotten new shorts. Contracts again get retired and total open interest falls by 12,014 to 504,956 contracts.

Monday, November 1: Price again rallies to within 30¢ of its 200-day moving average. To contain and cap this possible breakout, The Banks reissue 5,245 COMEX gold contracts and total open interest rises again to 510,201 contracts.

So what's going on here?

Inflation is surging while the U.S. economy is slowing. Real interest rates remain at historically negative levels and The Banks are still net short hundreds of metric tonnes of phony-baloney digital gold. They are clearly quite desperate to maintain the current downtrend in price and forestall the eventual breakout higher as long as possible. A universally recognized signal of trend change would be a rally and breakthrough of the 200-day moving average. The Banks would like to keep this from happening.

How do we know this? Review again the daily open interest data and then take a look at the chart below:

So, quite obviously, The Banks have laid their cards on the table ahead of the FOMC. They are observably intent upon capping price and NOT allowing a breakout above the 200-day moving average or a higher high in price above $1836.

Thus the days ahead will be pivotal for COMEX gold. In the aftermath of Wednesday's FOMC Fedlines and "press conference", will enough speculators be energized to "buy the news" and overwhelm The Banks, forcing them to fall back and rebuild defenses at a higher price level? The reaction this Thursday and Friday will tell the tale.

If a rally can finally develop, the COMEX gold price could move all the way back to unchanged on the year over the final two months of 2021. However, unlike the summer of 2020, The Banks seem intent upon extending their monopolistic domination of price through their fraudulent, digital derivative pricing scheme.