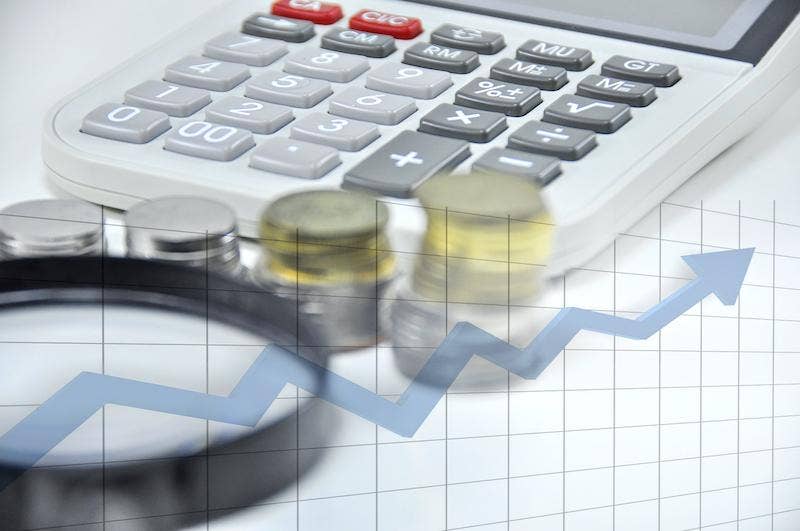 But that is not the reset discussed today. We want to look at the reset proposed by the World Economic Forum, and the book by Klaus Schwab and Thierry Malleret. They start with the fact that lockdowns have inflicted economic harm. They’ve impoverished people. And resulted in a random set of policies.

In a sense, their so-called reset is just a grab-bag of all the rubbish policies of the Left. They are using the pretext of the COVID pandemic—really, the consequences of lockdown—to repackage their old rubbish as some kind of “rebuilding”.

We must insist that taxing the still-solvent to dole out free goodies to the nonproductive is not rebuilding at all. It is actually just more tearing down.

Many other newly rebranded reset policies have nothing to do with rebuilding.

Let’s look at a few policy proposals that are now under the reset banner. One is the sick idea of international taxation of companies and individuals. Related to this is the policy to tax for the sake of inequality (as opposed to taxation to pay for anything). Also related is taxation for climate change. Do you see the common theme?

Another is what the WEF calls “defining racism”. Even if one believes that racism is systemic, honesty would compel one to admit that it has nothing to do with rebuilding the economy in the wake of COVID.

Last week, they had a conference call to discuss the way forward. One of the participants is our old friend, of the cargo cult of Modern Monetary Theory. Unsurprisingly, Stephanie Kelton said, “the public sector is uniquely positioned to lead in financing large-scale, green tech investments.”

In other words, the government will spend trillions on projects that no rational financier would put money into, calling it “investment”. It reminds me of the old song about Yankee Doodle who, as it goes, put a feather in his cap and called it “macaroni.”

Whatever the word is, when the bureaucrats pour taxpayer and cheaply-borrowed funds into nonviable projects, that word is not: investment.

But Kelton is not worried in the slightest. That’s because there’s not much of a limit to what the government can spend—so long as it doesn’t “overflow the bathroom sink”, in her frivolous analogy.

This idea of government spending, even on wasteful projects, is just a more explicit version of what even the otherwise-free-market economists preach today. The current darling otherwise-free-market monetary idea is: GDP targeting. That is, the Fed should make borrowing as cheap as necessary to get GDP up to its target level.

The Flaws of GDP

GDP is so flawed, that even spending on nonviable green energy ideas like unicorn farts and refrigerator door breezes adds to GDP. Heck, even breaking windows adds to GDP. Or preparing for a war with aliens, as Paul Krugman said.

The Green New Deal Resetters want the government to interfere all over the place, including by administering capital allocation. And determining which objectives are worthy objects of their largesse.

The People Can’t Be Trusted

The principle for over a century has been that free people in a free market cannot be trusted to decide what to use as money, or what the price of borrowing should be. Only wise, incorruptible central planners can do that. For your own good, of course.

Kelton asserts that we can grow jobs and at the same time cut down on fossil-fuel energy use. Most of us think that these are opposite, as driving up the cost of energy will make us poorer. But Kelton—remember she sees little real limit to spending—thinks that the government can deliver on both promises.

The envy part is in wealth taxes, and taxes imposed internationally. These taxes are not about raising revenue to pay for useful programs (or even a useless program). They are about making the wealthy less rich. For the sake of it.

How To Opt Out

The idea of a massive new set of expensive policy initiatives, paid for by spilling trillions (or more) down a massive bathroom sink—where the only constraint is not overflowing—gives more credence to the gold community’s idea of a great reset.

The dollar (and its derivatives EUR, GBP, etc) will become even less sound and move even farther along the path to utter ruin. That is, it will be debased. Gold will become more attractive, and farther along its path to use as a general medium of exchange. Gold is how rational investors opt out of Kelton’s central plan to pour their money down a large-scale green drain.

In the meantime, Monetary Metals is using gold to finance productive ventures, and pay interest on gold. Our investors are earning interest and helping the world move to a better monetary system.

Let’s look at the fundamentals of gold and silver. First, here is a chart showing more than a year of gold. 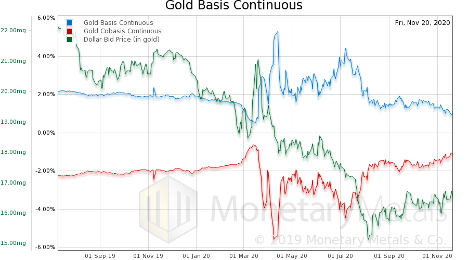 There has been quite a drop in the dollar (the dollar can only be measured in gold, not in derivative currencies, and not in consumer prices). It’s gone from over 22mg gold to 15mg and now back up to 16.6mg.

During that time, the cobasis (our measure of gold’s scarcity to the market) held steady as the dollar dropped (i.e. the price of gold went up), then fell a bit as the dollar fell, and it has been rising since July. It is now higher—gold is now scarcer—than when the dollar was 22mg (i.e. gold was $1,410). 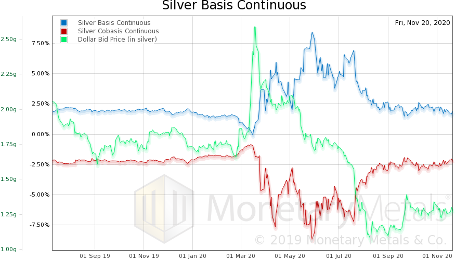 As is often the case, the silver chart looks similar but different.

The overall shape is the same. But note two differences. One, the absolute level of the cobasis is around -2.5%. Whereas for gold, it is -1.1%. Two, the cobasis in silver is not higher now than in July 2019. It is about the same.

Make of the absolute level what you will. We tend towards the view that there’s no greater abundance of silver to the market compared to gold. Rather, it’s a continued artifact of the backing away of the market makers.

It is of note that during this recent period of rising dollar against silver (i.e. weak silver price), silver’s scarcity has been rising and is now near its post-COVID high.