The Ides of March Cometh for the Banks 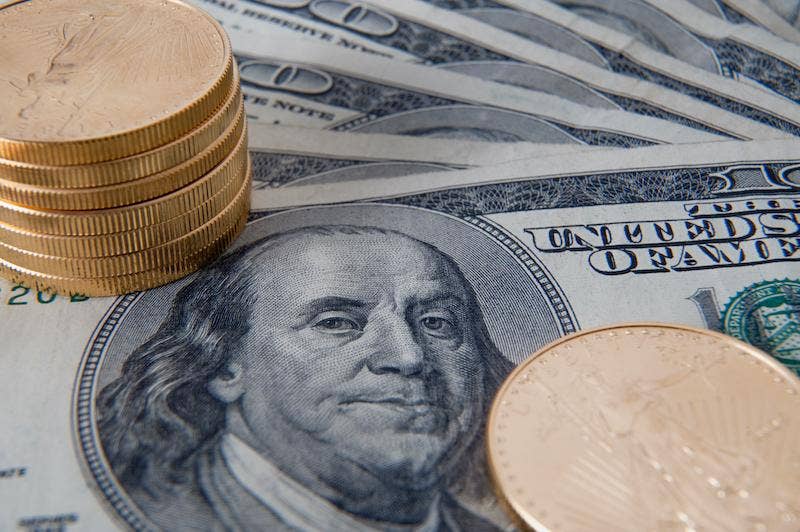 “In terms of policies for right now, very unusual for the IMF, starting in March I would go out and I would say: 'please spend'. Spend as much as you can and then spend a little bit more."

She was referring to national governments and calling for them to ramp up their fiscal spending to support their economies and provide relief for the damage caused by the lockdowns. This requires an enormous increase in new debt issuance by governments globally on top of the massive debt mountain already in place. A lot of that existing debt is maturing and will have to be extended too. Who will pay for all of this? The central banks of course, with currency printed out of thin air, or more precisely, by adding a few zeros to a number on a computer screen. What does this do to the value of currencies worldwide? What happens to inflation when more currency chases fewer goods and services? What are the implications for the prices of Gold and Silver? It’s self-explanatory.

All of this begins in March, i.e., in just over a week from now.

While the premiums and prices for physical metals have soared, the paper markets for Gold, Silver, and the miners have been under pressure recently. However, I believe the latter is about to come to an end soon based on the various tools I use in my process.

The market reached a level of bullishness at the peak on February 1 not seen since the peak in August last. Yet, almost everyone continued to expect higher prices. What happened next? We dropped 15% in just three days to 26, and we’ve gone sideways since. Although that bullishness has been tapered somewhat, we’re still nowhere near bearish. While that is not a requirement for a bottom in Silver, it is certainly not supportive of the massive rally I expect to follow soon. I would prefer to see further downside to create the fuel for that rally. But as the Rolling Stones point out: “You can’t always get what you want.”

One just has to look at the weekly Gold:Silver Ratio (“GSR”) to see how Gold has significantly underperformed Silver since the March 2020 lows in both. 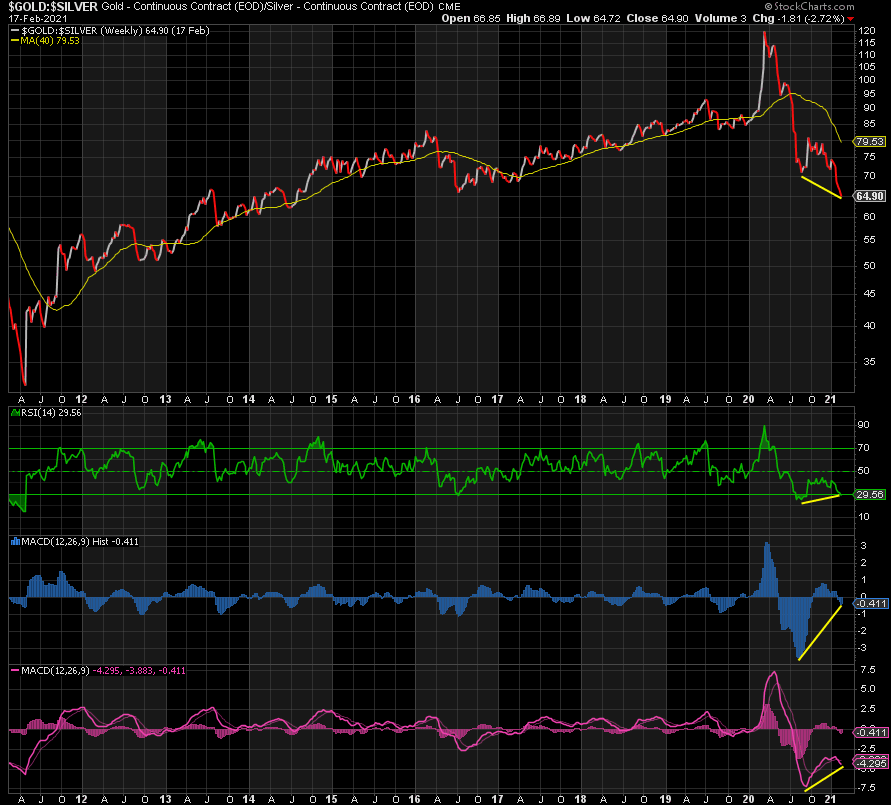 Extreme oversold conditions coupled with glaring positive divergences after a such a big drop to levels not seen since 2013 (the GSR has almost halved) suggest a short-term rebound is coming. Gold is increasingly likely to ‘initially’ lead the way higher in the next rally, and then Silver will catch up and pass it by.

The GSR ratio also explains why Gold is closer to neutral than in Silver and therefore closer to a bottom.

The miners are high beta plays on the metals, which means that they tend to be more volatile in price and sentiment. Therefore, it is no surprise that the miners are actually bearish, which is a good sign and indicates that a bottom is close.

The only caveat is that they’re not extreme bearish, so we could see a little more downside yet. However, the risk/reward profile is clearly turning to the upside. Hence, I have started to add some Senior and Junior miners recently. 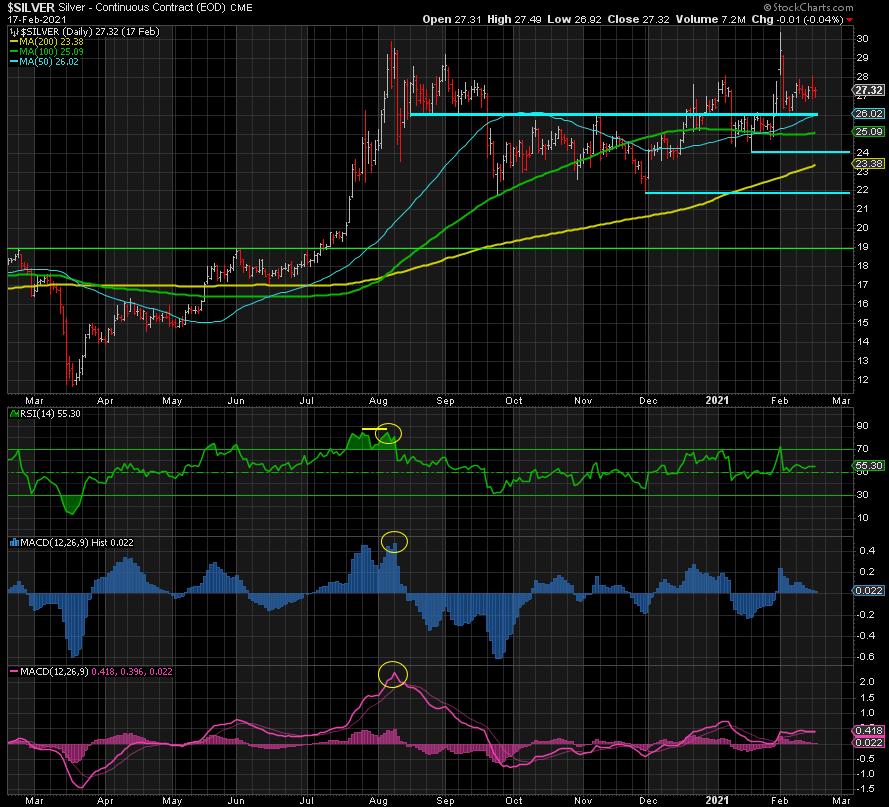 Silver’s daily RSI is at 55 whereas Gold’s is at 33, which further supports my expectation that Gold is soon to outperform Silver. Silver has also just broken out of a short-term bearish flag pattern to the downside, which suggests lower prices ahead. Resistance is now at 28.06, whereas the next key support level is at 26 again. Below there opens a possible test of 24 next. 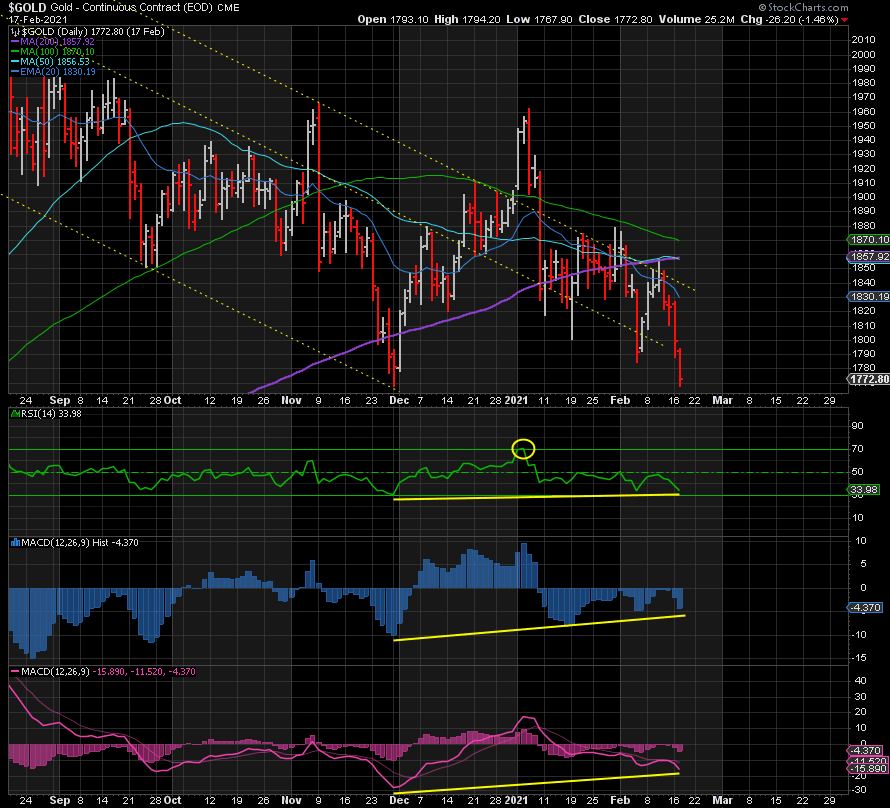 I shared last week that Gold had run into resistance at both its 50-day and 200-day moving averages and would likely fail at the first attempt, which is exactly what happened. I have also been waiting for a positively divergent lower low, and that is precisely what we have now. This does not mean that the bottom is in place, we could go lower yet, but it does signal that the bottom is close. Given that my expectation for the next major peak is 2300 or above, the risk-reward is clearly skewed to the upside from here, imho. The fact that Gold is in a bullish flag pattern does not hurt either. 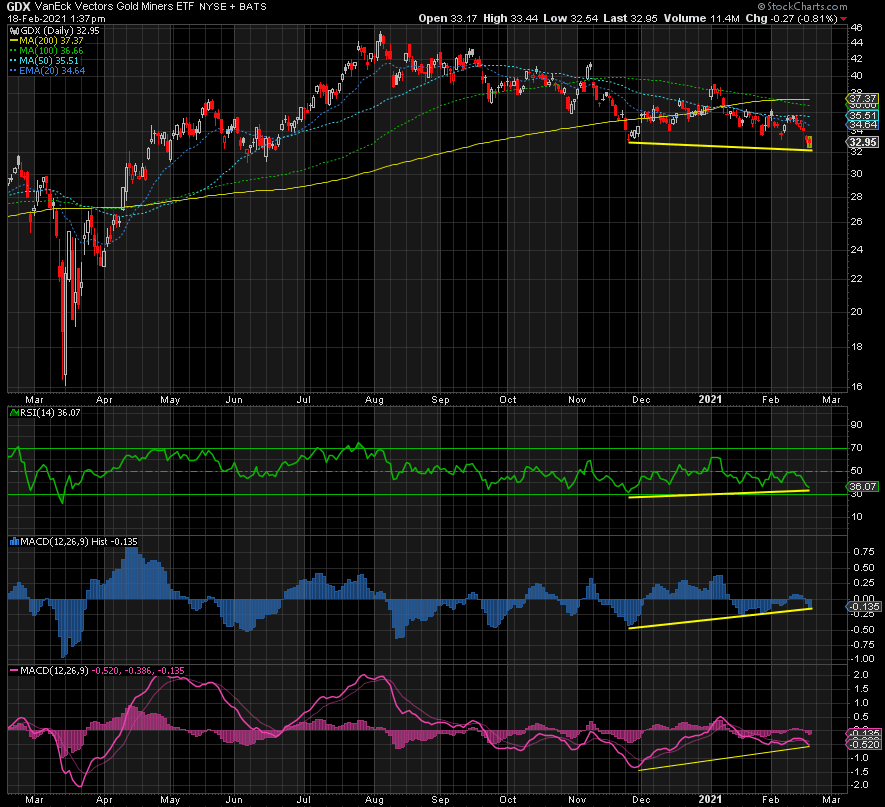 The chart above says it all, but even though GDX is oversold with an RSI of 36, it has room to fall a little further while remaining positively divergent to the previous low of ~33 on November 24. There is a double bottom at ~31 dating back to June 2020, which could become a triple bottom. Whether we have seen the low or not, the risk/reward to the upside is clear, imho. 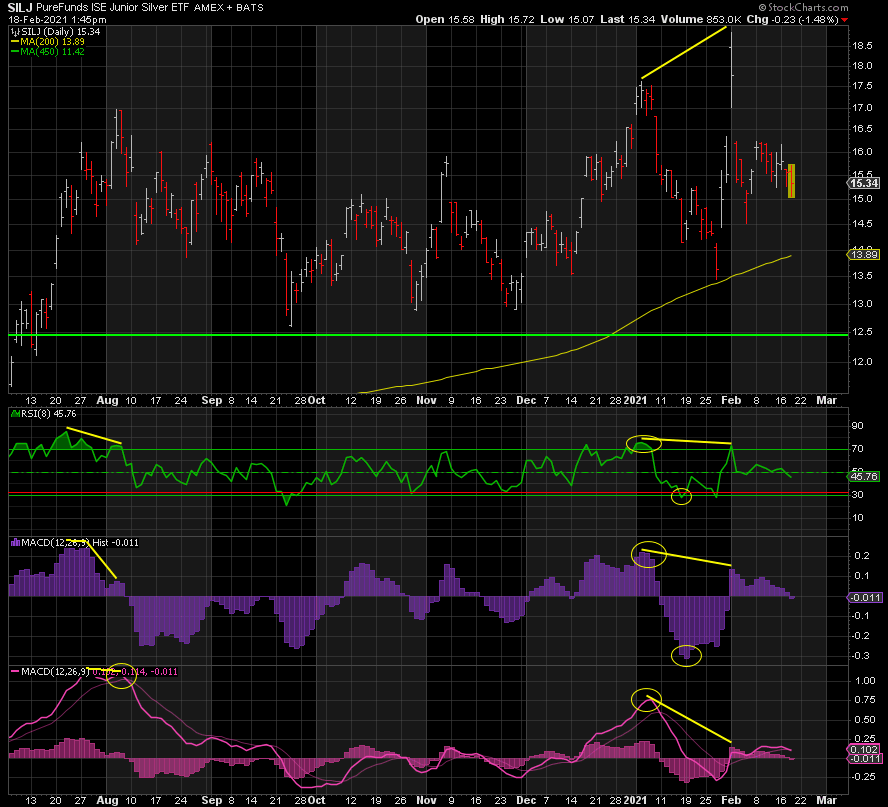 SILJ will likely continue to follow fortunes of Silver and then some, but the 200-day acted as support at ~13.30 in February and will likely do so again, now at 13.90. A break there opens up a move down to ~12.50 before it takes off again. The fact that SILJ’s momentum indicators are neutral relative to the oversold levels in GDX also support relative outperformance in the Gold miners in the short-term, imho.

Suffice to say that Bullion Banks remain short Silver but not significantly so. 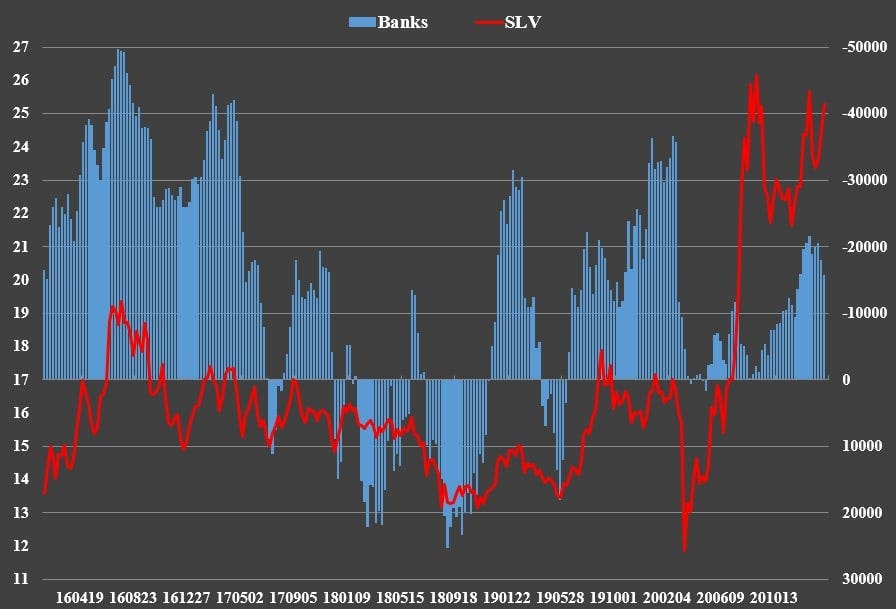 But what is more interesting to me is that the Small Speculators—i.e., retail—have ramped up their long positions again to the highest level since February 2020. We all remember what happened next: $11. These guys are typically wrong, which doesn’t bode well in the very short-term. Perhaps it’s different this time, but don’t bet on it. 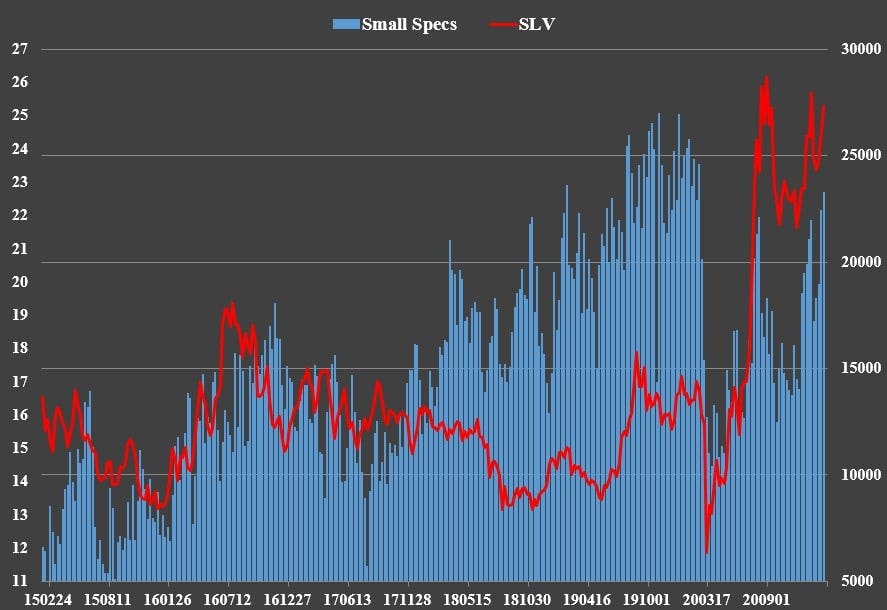 By contrast to Silver, the Bullion Banks are extremely short Gold. Hence, their preference for lower prices to reduce their positions. 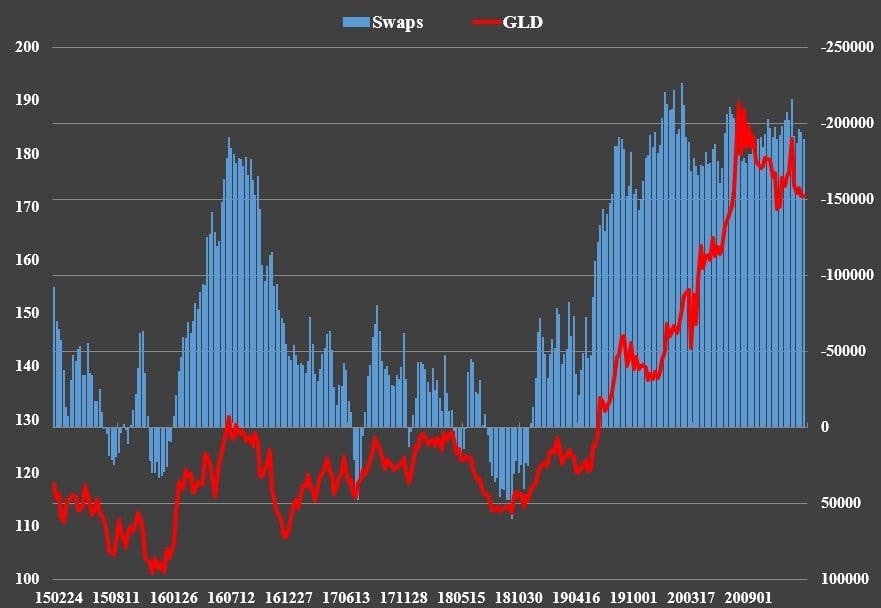 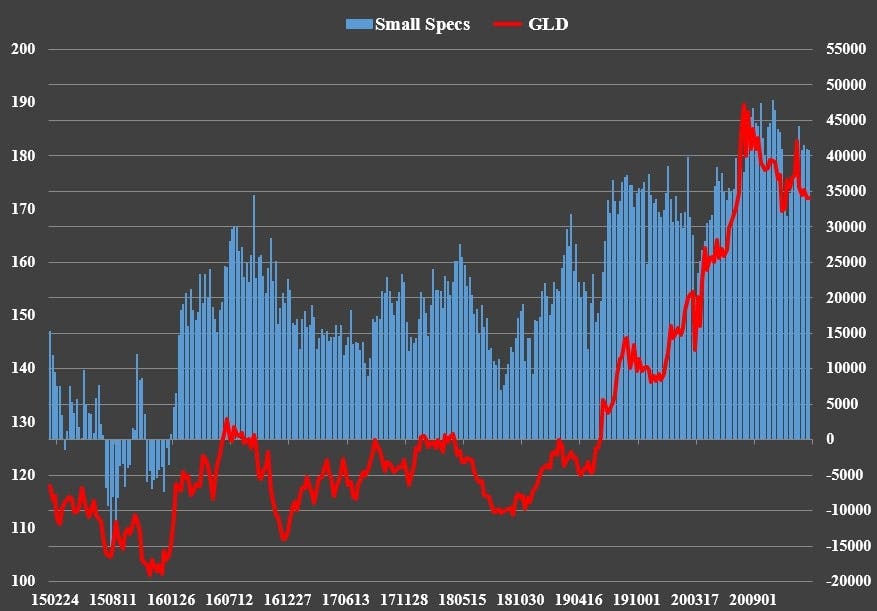 Taken together, this is not a good sign and suggests lower prices yet. But this data is already nine days old and Gold has fallen a lot since then. We have to wait until tomorrow to see how this positioning has developed.

On balance, Gold and Gold miners certainly look closer to a bottom, while Silver and SILJ may have further to go on the downside yet, at least in the short-term. However, taking a step back and looking at the bigger picture, the macro conditions are falling into place for a sharp rise in both metals and miners starting next month. The Ides of March cometh for the Bullion Banks.