The Inflation vs Deflation Debate 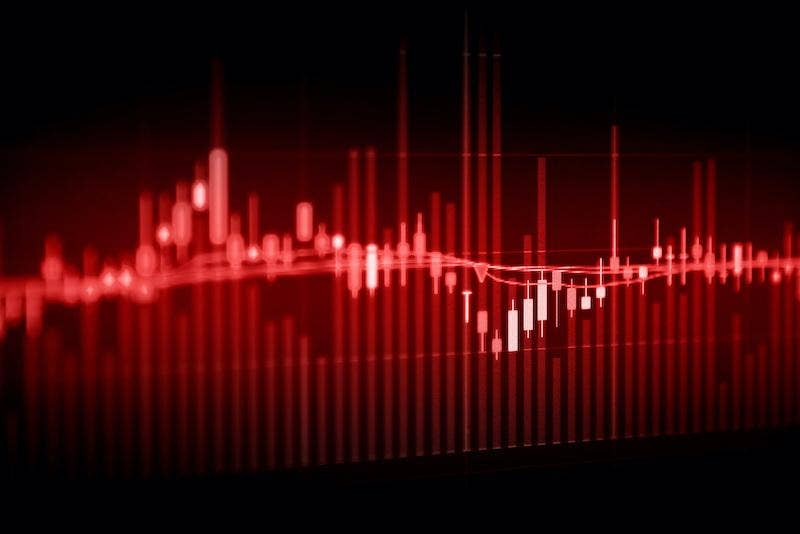 In a prior article, I discussed how timeframes matter with respect to price forecasts. The same goes for macro forecasts. Consider the inflation debate. Despite all protestations to the contrary and frequent references to such textbook concepts as the velocity of money, evidence of inflation here and now is everywhere, even in the government’s vastly understated CPI index. Anyone can see it in prices at the grocery store, the gas station, and used car dealerships. Anyone with a laptop can see it in the spectacular rise in commodity prices. Tried to buy a house lately? It’s beyond obvious. As I said back in March 2020, supply shocks will become more pervasive while fiscal and monetary stimulus soars. That’s exactly what happened. More money chasing fewer goods and services. Forget the textbooks, we live in the real world, and seeing is believing. But this is where timeframes matter. 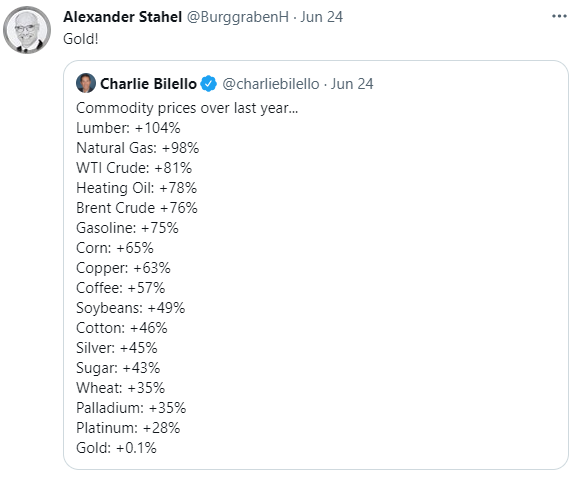 Inflation is clearly an issue here and now, but that’s old news. What’s more important is what happens next. There are multiple signals that suggest inflation will drop, perhaps sharply, in the next few months. All of the economic activity data I’m watching—save perhaps for existing home sales, which are decelerating too—are missing expectations, some by a mile. 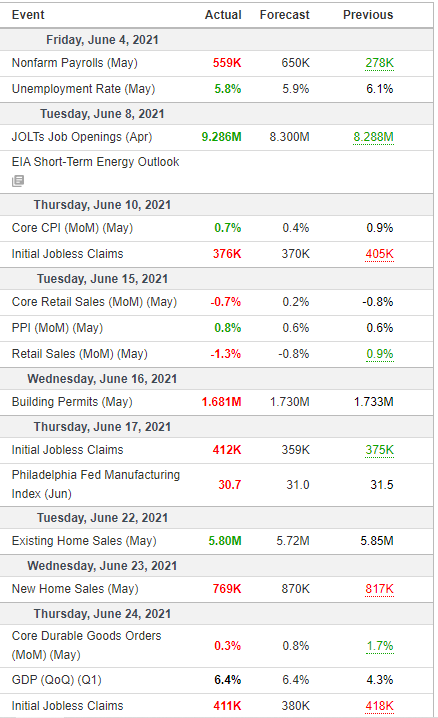 Where is the roaring growth we’re being fed on a semi-daily basis? The economy is slowing. The reopening is already priced in, and any further benefit is diminishing fast. Fiscal stimulus is waning rapidly, with just 20% of existing programs left to spend. Emergency unemployment benefits are expiring in September. The decline in the jobless rate is solely due to the falling labor force participation rate. Why bother working when you get paid the same to watch movies all day? All that and the Fed is trying to be hawkish? Good luck with that. With the economy on the slide again, the risk is with disinflation or outright deflation. Should that transpire, it won’t last long. Supply constraints may mean the availability of goods falls faster than demand, driving up prices. Absent that, weaker economic activity in the coming months and falling confidence on the part of the consumer signal disinflation at the very least.

Alternatively, the Fed itself could trigger such an outcome. By trying to tiptoe their way to being hawkish and portray confidence in the economic outlook, they may succeed beyond their expectations. Whether they raise rates or the mere risk of a rate hike becoming a reality becomes the consensus expectation while economic data takes a dive, they risk a major “policy error” and a sharp drop in stocks, much like what happened after the December 2018 rate hike but far worse in severity.

What happens next? If history is any guide, the fiscal and monetary spigots will flood the economy and markets with newly printed dollars. MMT on steroids. Universal Basic Income for everyone. Tax rebates. You name it. The only alternative is the collapse of everything. Assuming they stick to their tried and tested boom and bust policies and try to reinflate the economy and markets, the end result is more inflation, even hyperinflation.

It’s not a debate about inflation or deflation—we’re already getting both. Inflation in necessities like food and energy, and deflation in discretionary items. As for being “transitory”, if you consider a deflationary period lasting weeks, perhaps a month or two, of such significance that it renders the prior inflation transitory, then you’re right. However, if you are focused on the big picture, it’s inflation now, with the potential for hyperinflation to follow soon after. It’s not transitory. The deflation in between was just a blip on the chart.

What does this mean for Gold, Silver, and the miners? The Fed is trapped. It can’t raise rates or taper QE meaningfully without tanking stocks in the process and risk the complete loss of confidence in U.S. debt. Quite the contrary, they are going to have to send in the bombers to flood the markets with liquidity. Fiscal stimulus will be cranked up to new highs also. Bond yields are capped. The dollar tanks, which is what the supranational institutions require to usher in their digital eSDR. Inflation targets 10% and beyond. Real yields plummet. Precious metals and miners get a ticket on the next Virgin Atlantic trip to the moon.