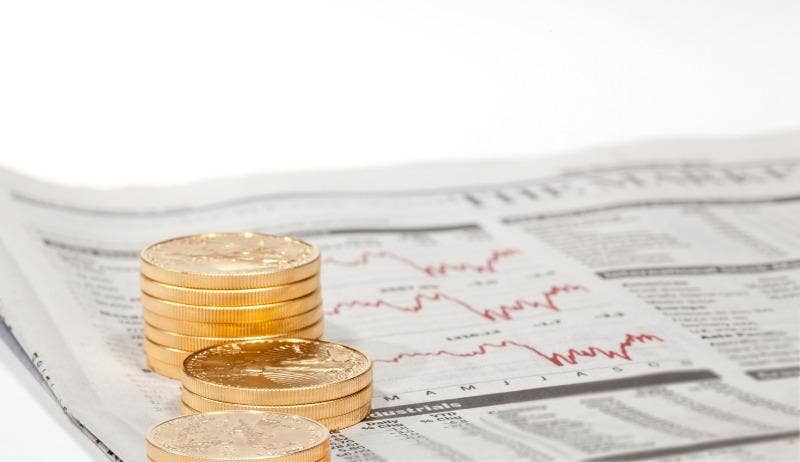 Back in November, we noticed a new trick being employed to manage and manipulate the COMEX gold price into month-end expirations. Here's an update and explanation of why and how this is occurring.

Again, we've already written about this twice. You may have missed those links, however, so here they are again in case you need a refresher:

The topic at hand is a surge each month in Trade at Settlement volume. This surge typically begins on or around the seventh day of the month where a front/delivery month is due to expire, and it then continues for five days. Typical average volume of TAS trades is about 3,000 per day. During these surges, the daily volume grows by 10X and regularly exceeds 30,000 contracts.

What is "Trade at Settlement"? Again, a reminder from the CME, itself: Trading at Settlement (TAS) for Metals Futures 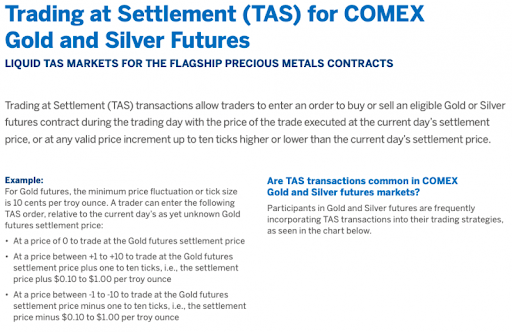 The pattern that has emerged is this:

• A price smash late in the month ahead of option expiration and contract rolls.

As we've studied this, we've drawn the conclusion that this pattern is evidence of the ongoing price manipulation efforts by the bullion banks. Today, let's explain how the CME's own data bears this out.

So now ask yourself, why would someone place a trade to be filled at the unpredictable daily settlement price? Why not place the order at market or at a limit? Opening yourself up to just the closing price seems strange. However, it's not strange at all if you don't care about the price at which you get filled. And why would you not care about price? Because you are actually putting on TWO trades at settlement...what's called a "spread".

As an example, with this trade, you buy and go long the Apr22 contract while simultaneously selling short the Jun22 contract. In doing so, you capture the spread/difference between the two and it really doesn't matter what time of day this order is executed.

Below are the closing COMEX prices for Friday, March 11. Note that any party placing a spread through a Trade at Settlement execution would buy the Apr22 at $1985.00 and sell the Jun22 at $1989.40. In the CFTC's opinion, this trade is fully hedged and riskless and is therefore seemingly not subject to position limits.

So now if you're a Bank and can execute this trade in size, the trade itself can make you a tidy sum of cash. It's good work if you can get it.

But I think it's more malicious than that. My theory—and one that is growing in likelihood each month—is that the party with the spread then "legs it out" before expiration. They dump the long side hoping to cause a flush in price BEFORE covering the short side at that post-flush cheaper price. This would be a VERY profitable strategy each month if you could do it in size, AND it would also help you with your other goals of smashing price into option expiry and dissuading as many as possible from considering "standing for delivery".

So are there footprints of this strategy left over in the daily data? Only if you look for the clues and then are able to connect to dots. See the March 11 trading volume figures below:

And there it is! Note that the TAS volume for the Apr22 is nearly identical to the TAS volume of the Jun22. Those are your spreads where someone has bought about 19,000 Apr22 longs and sold the equivalent amount of Jun22 short. Also note that, if you add the Apr22 and Jun22 volume together, you get 38,453 contracts. And what was total TAS volume last Friday? As shown above, it was 38,764.

So what will happen next? You MUST assume that these spreads will again be legged out for maximum price impact later this month. The 19,000 spreads that were put on last Friday were only those placed on the fifth day of the monthly surge. The total amount of spreads placed using TAS during the week of March 7-11 is many times higher than that.

The point of all this? In my mind, we've no doubt uncovered the latest Bank trick for smashing price into front/delivery month expirations. What does this mean for price? Well, we can probably expect more upside, at least for the next week or so. Perhaps price will again reach toward $2050 and beyond?

After that, however, and as we move toward Apr22 option expiration on the 28th of March and contract "expiration" two days later, we must expect a sharp pullback as the party or parties who have once again gone to all the trouble of placing these spreads seek to unwind them for maximum price impact and profit.

You would be wise to prepare your trading strategies accordingly.