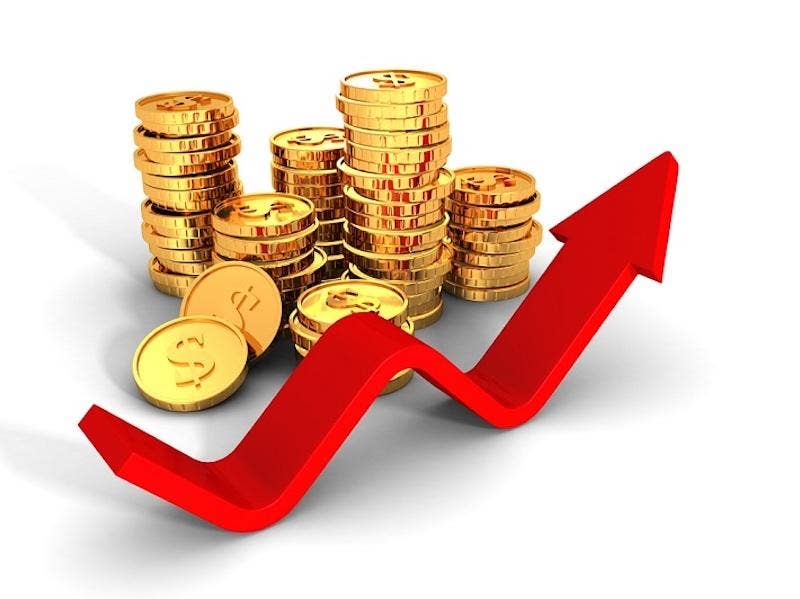 Analysing markets to determine where they’re headed is all about probabilities. Anyone who says with 100% certainty that a market is going up or down is being dishonest. But, the probabilities for potential outcomes can be judged based on prevailing information, multiple toolsets and sources, and a tried and tested process. With this in mind, there are two primary scenarios that I am monitoring over the next few weeks with respect to Gold which I’ll share today. There are numerous possibilities, but these are the two with the highest probability “in my humble opinion”.

Wave (3) of 3 completed at 2089 and wave (4) is under way. Corrective waves usually come in threes: wave A, B, and C. Wave A was the drop to 1874 and we’re waiting for the peak of wave B to gage how low the final wave C could fall before we hit bottom and then head up to new highs.

An equally viable alternative is that we have already completed wave (4) and wave (5) of 3 to even higher highs has begun.

The only difference between these two scenarios is that we have already bottomed versus a lower low still ahead. Both call for higher highs ahead in wave (5) of 3. Another case of different routes, same destination.

It’s just a question of buy now or wait for a further dip. From my perspective, if you don’t own any precious metals or miners, you should buy at least some now. For those like myself who are already long, you could average in by buying now and more later, just load up now, or wait for the lower low to back up the truck. That’s a decision you have to make.

Personally, I am leaning towards further downside before wave (5) begins. My rationale is based on bigger picture fundamentals. As I shared back on July 6, and consistently since, I am expecting a pullback into September due to the 75% cut in the Fed’s purchases of treasury bonds and the termination of the $600/week in fiscal stimulus.

Then in September, I believe the Fed will begin printing dollars at the same rate or more as in Q2 but without end. They are likely to formally cap bond yields in the process, creating a cap on real yields also and an asymmetric risk to the downside. In addition to an agreement being made to replace or continue the $600/week payments, I also believe that the U.S. Treasury is preparing to dump 2 to 3 trillion dollars on the economy ahead of the November elections, perhaps as early as September, latest October. The combination of these factors is likely to send Gold, Silver, and the Miners to stratospheric levels. This is what triggers wave (5), the monster wave.

In order to justify such moves, we are likely to see a sharp reversal in stock indices, which is why I expect a more drawn out and deeper drop in Gold and Silver before the next big rally begins. Precious metals followed stocks lower in March and are likely to do so again this time around. The decline in stocks hasn’t even begun yet. This increases the probability of lower lows before higher in my opinion. My belief that the banks will want to take out the upward trend-line tagged at 1874 doesn’t hurt either.

Are higher highs a done deal? As I said at the outset, nothing is 100% certain, but given the underlying fundamentals, it is by far the most probable outcome.

Of course, Gold and Silver could crash to lower lows (anything is possible), i.e. below $1045 and $11, but to put it politely, I consider this highly unlikely for multiple reasons, not least the fundamental backdrop.

In conclusion, the main point is that this bull market remains very much intact. Although we may have further to go to the downside, this pullback should be considered a gift given the spectacular rally to follow… in my opinion. Don’t get caught up in the daily noise and waves of emotion, instead focus on the bigger picture, and that remains up.