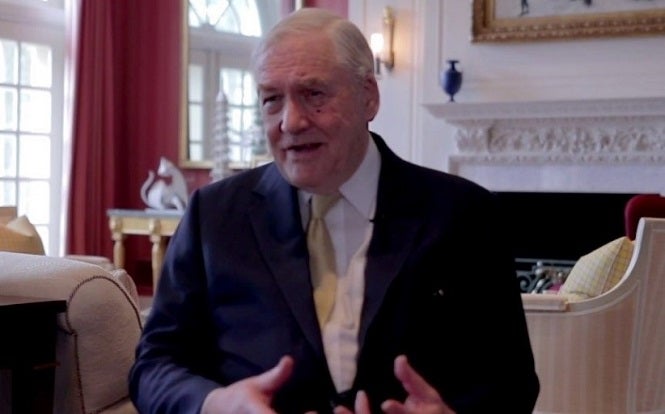 Into this mess wades Conrad Black, recently pardoned by U.S. President Donald Trump, with a series of concrete fiscal, social, and foreign policy proposals … including a partial gold standard.

“If Canada wants to be big it has to think big,” writes Black in The Canadian Manifesto , which calls for lower taxes, increased openness to capital flows, and deregulated securities markets. “And stop being a witless mimic of New York.”

“The sensible and imaginative course is to reinvent hard currency,” writes Black. “Canada should tie the value of its currency to a combination of the prices of gold, oil, and a consumer shopping basket in equal thirds.”

The most remarkable thing about The Canadian Manifesto is that it exists at all.

Canadian policy circles are filled with “experts” in taxation, econometrics, monetary policy, and other narrow fields. But few, if any, have demonstrated the guts or talent to credibly outline a path forward outside their narrow disciplines.

A believer in big, but effective government

Black advocates what many would characterize as libertarian ideas. However, he also favors an activist role for government, particularly in areas such as the massive infrastructure needed to tie a large country like Canada together. He also acknowledges the need to provide assistance to the truly needy as well as a much stronger defence policy.

Yet while a Black government would still be big, he offers a variety of steps to boost effectiveness.

These include shifting the tax burden from production to consumption, imposing limits on government borrowing, and getting out of the way of the development of natural resources, which he describes as the only thing Canada produces that the rest of the world really needs.

Black, a surprisingly good writer, has produced detailed biographies of the last two Presidents who defaulted on America’s national debts.

He is thus fully aware that without the hard currency checks (which Franklin Roosevelt and Richard Nixon abandoned when they shifted America from a gold exchange standard to a fiat system), governments can raise taxes in secret by borrowing and printing unlimited amounts of cash.

It’s a profoundly anti-democratic process, which politicians and economists have used for centuries to trick voters.

Indeed, Black cites governments’ ability to manipulate a gold standard as one of the reasons that he advocates broader backing for the currency.

Black posits that development of Canada’s vast underexploited wealth and talent provide it with the potential to lead the world. For example, if Canada adopted a partial gold standard, he says America would follow suit.

As one would expect in a forward-looking work, Black refuses to dwell excessively on the country’s existing problems.

For example, he focuses primarily on Canada’s federal debts, which in many ways are moderate by world standards.

Yet when Canada’s provincial, business, personal, and financial debts are included, much of which are de facto federally guaranteed, they now total $8 trillion —or more than $1 million for each Canadian child under 18 .

The most impressive agenda in a quarter century

A broader question relates to how this fallen newspaper baron and convicted felon in his mid-seventies has managed to put together Canada’s most ambitious policy agenda in a quarter century while the country’s top bureaucrats, academics, and think tanks produce little but drivel.

Much of the blame relates to Canada’s disastrous school system, which Black argues needs drastic reforms including merit pay for top teachers and union decertification.

Indeed, Black provides an illustrative example of benefits of a life-long renaissance education—in his case, steeped in history studies and a broad career in business and government.

Even Black’s years in jail—a demonstrated, time-tested formula for stimulating creativity in writers, political leaders, and philosophers—appear to have done him some good.

Whether Canada moves to a partial (or full) gold standard or any other item on the Black agenda remains an open question.

However, he has clearly laid out a credible path forward for discussions on a variety of fronts.

Robert White
Reply
Conrad Black is a Toronto businessman that I have admired & followed since I was a small child growing up in Toronto in the 60s. My CA father also worked in Toronto on Bay Street and my education in terms of business has been a lifelong lesson in terms of professionalism since that time. Today, I am most concerned with the off exchange brokering & dealing in the Commercial & Residential Mortgage Backed Securities Industry that has shifted from exchange traded to off exchange traded since the ushering in of the Great Financial Crisis & Lehman Moment in the historiography. Conrad Black is advocating for increased off exchange trading in the dark unregulated derivatives universe which is currently estimated to be hovering around $1.9 quadrillion USD and counting. To advocate increased issuance of residential or commercial securities into an unregulated environment that is historically known to be systemically unsafe [see Brooksley Born testimony before Congress] is to miss the point of systemic risk in the FDIC banking structure as it shifted to the unregulated dark markets & Non-Bank Lending Sector post-Lehman Moment. Conrad Black was raised by a CA just as I was and I, for one, cannot fathom how a businessman such as Mr. Black could advocate for further deregulation of tertiary business sector banking & lending into a dark universe that is known to contain all of the associated & inherent risks that grew out of the 08 crisis that was never ameliorated post-Lehman Moment in the historiography??? Mr. Black is obviously ignoring all of the hedged banking toxic waste & associated systemic risk to global banking that that entails as the toxic waste never disappeared into the finance ether post-Lehman. The toxic finance waste was shifted onto the dark pool derivatives universe in the form of derivatives bets on debts, deficits, interest rates, and commodities, et cetera. Mr. Black is my all time favorite big business titan of all time but he has completely lost all perspective on risk associated with debt if he advocates for increased deregulation of the securities industry in CANADA. Some of us want the reinstatement of Glass-Steagall Act in contradistinction to increased finance deregulation and investment bank proprietary trading regime whereby risk is not addressed appropriately macroprudentially. RW
Reply
Leave a Comment