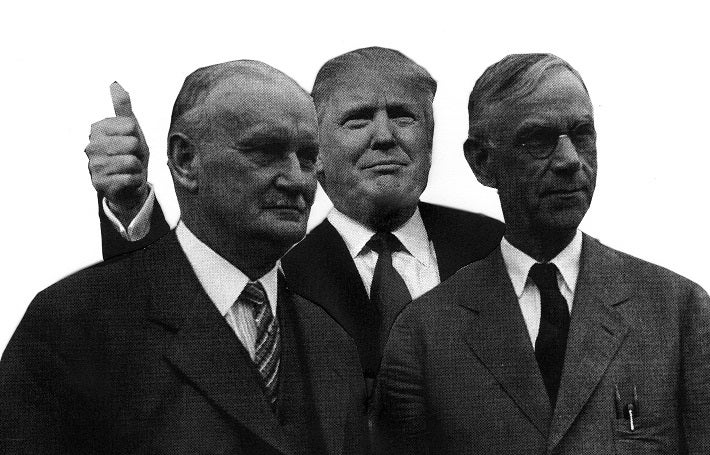 Donald Trump heightened his anti-trade rhetoric yesterday. In a tweet, he attacked Bill Clinton for his role in the North Atlantic Free Trade Accord. “How can (Hillary) put her husband in charge of the economy, when he was responsible for NAFTA (which links Canada, the United States and Mexico), the worst economic deal in US history?” he wrote.

Trump has cited few names among his mentors on economic policy. However, in matters of trade, his ideas appear grounded in the policies of Reed Smoot and Willis Hawley. That’s particularly true of the Tariff Act of 1930, which the two Congressmen co-sponsored and which coincided with dramatic plunges in trade and US employment.

Understanding how these events played out is crucial for investors trying to get a read on future trends. According to comments made by Ben Bernanke, former chairman of the US Federal Reserve, in a speech delivered in 2013, a consensus exists among economists that these protectionist policies exacerbated and prolonged the Great Depression.

Mark Twain is widely attributed to have said that “History doesn’t repeat itself – but it often rhymes.” That quote applies neatly today. While comparisons aren’t perfect, recent developments eerily recall those in the early 1930s, when Smoot, Hawley and other politicians (like today’s leaders) were doing everything they could to keep the country from slipping into a depression.

Then, like today, many US politicians were tempted by the quick fix of protectionism. Charge a tax on imports and this will make it easier for American firms to compete, they said. Their solution was what became known as the Smoot-Hawley Tariff, which raised import fees on more than 20,000 goods to record levels.

The results were as you might expect. US businesses got a short-term boost due to the drop in foreign competition. Canada and the UK (the China and Mexico of the 1930s) were particularly hard hit.

However those countries and many of America’s other trade partners, quickly retaliated, imposing tariffs of their own. US trade – including imports and exports – quickly collapsed by nearly 50%. According to the US Bureau of Census, the unemployment rate shot up from 8% when the tariffs were implemented, to 25% by 1933. Gradually the Great Depression became global in scope.

Trump’s sally against NAFTA – which comes on top of repeated threats to impose punitive tariffs on Chinese and Mexican imports and penalties on US companies such as Carrier air conditioners that move operations overseas – echoes widespread sentiment in both major US political parties.

Many Americans are stunned that the Republicans, which maintained strong free-trade rhetoric under Presidents Reagan, Bush the Elder and Bush the Younger, would take such a dramatic turn towards protectionism. However, there were numerous signs that this was coming.

Republican pretenders Ross Perot and Pat Buchanan both advocated protectionist measures during their presidential bids in the 1990s and early 2000s. However, those roots go even deeper. Smoot and Hawley were also both Republicans, as was then-President Herbert Hoover, who signed their infamous tariff legislation.

Furthermore, Trump is not the only one advocating protectionism. Both Democratic presidential contenders Hillary Clinton and Bernie Sanders are likely to pursue anti-trade policies. That means that at a minimum, the Trans-Pacific Partnership looks set to be shelved.

How much further things will go if Trump is elected is unclear. For clues, investors will do well to study his two economic mentors.

B. Nobalia
Reply
Not bad buddy. But you`d better cool your criticism of Trump. Protectionist or not, keep it up and then you`ll get Hillary and you,ll really have problems.
Reply
Leave a Comment

Weekly Wrap Up
134
Two Steps Forward, One Step Back - Weekly Wrap Up
By Craig Hemke
News
66
Inflation is Everywhere
By David Brady
News
23
The Fed Further Reduces Its Transparency
By Dave Kranzler