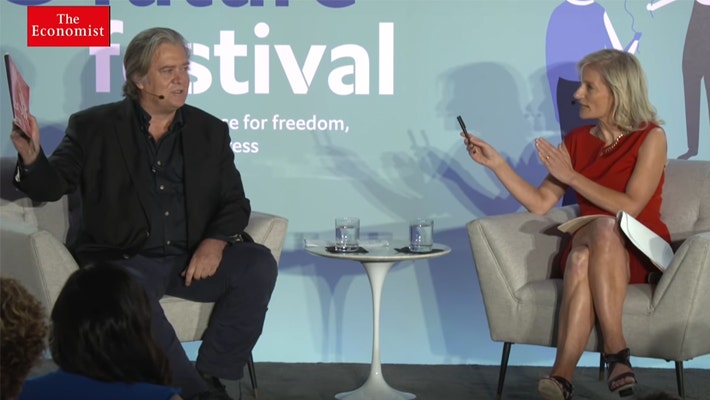 Bannon brushed aside the Economist magazine’s recently-published “ Manifesto,” which called for a more liberal society, free markets and a new social contract.

Minton Beddoes was unable to shake Bannon from his anti-immigration, anti-trade, race-baiting arguments. She grew increasingly frustrated as the process unfolded, at one point interrupting Bannon eight times during one of his answers.

More broadly, it raises questions about how the Economist’s elite readership, which populates the commanding heights of government, central banks and academia, could have steered the global economy towards impending depression and bankruptcy.

Interestingly, gold is at the center of that process, which made the rise of Donald Trump-style populism inevitable.

That the usefulness of the Keynesian-inspired debt-growth economic model is nearing its end seems beyond doubt. Indeed, the entire global economy appears to be in peril.

The Institute of International Finance calculates that the USD $247 trillion in worldwide system debts now account for 318% of global GDP.

The decreasing marginal productivity of new borrowing means that merely maintaining appearances of economic growth requires constant increases in personal, business and government debts at a faster pace than gross domestic product is able to grow.

This shows up in the “U.S. net national output” metric that we constructed, which adjusts GDP for increases in the national debt and unfunded liabilities. Measured this way, the U.S. economy has been in a decade-long freefall and could be 30% smaller than the experts suggest.

The Economist describes the “liberal elites” (who comprise a large part of its 1.5 million readers) as “self-serving and unable, or unwilling, to solve the problems of ordinary people.”

This is due to the Economist itself, which has refused to emphasize the degree to which economic signals have been falsified (a process known as Goodhart’s Law).

For example, the U.S. government repeatedly changes the way it calculates unemployment, inflation and other data so they paint a rosier picture. It also keeps trillions of dollars of its debts off the books.

However, the Economist’s biggest dereliction has been failing to point out that a significant portion of the taxes that government collects are hidden and that unfunded liability accruals are not included in its spending totals.

Truth in Accounting, an Illinois-based public sector watchdog, says that accounted for properly, U.S. government spending equates to more than 60% of GDP —as much as France’s.

However, the most dangerous government data manipulation—inflation of the currency used to measure economic progress—is almost indecipherable even to experts.

Economists tend to downplay money-printing as merely another hidden tax. Doing so enables the state to better, as Colbert once said, “pluck the goose as to obtain (most) feathers with the (least) hissing.”

However, in a socialist, state-directed economy like that of the United States, which has had few checks on its monetary policy since its default on its gold debts in 1971, inflation creates all sorts of calculation problems. This is because, in part, the prices of goods rise unevenly.

As Ludwig von Mises noted in Economic Calculation in the Socialist Commonwealth, this raises questions as to how economists can manage an economy if they don’t understand the pricing mechanisms that govern relationships between the various components.

One modern day example, related to the price of money, suffices:

One of the effects/causes of inflation is interest rate suppression, which we estimate transferred approximately $2.4 trillion from savers to borrowers during 2017 without even a dollar of the transfer ever being recorded on paper.

So, Mises would ask, how could “expert” policy-makers—let alone politicians and the general public—possibly assess whether the wealth transfer is fair or worth the cost if that measure (which equates to the amount Americans paid in personal income taxes that year) was never noticed, quantified or published?

Bannon’s triumph over the Economist was even sweeter for him because it came before a hostile audience not long after the New Yorker Magazine retracted a similar invitation.

However, the implications of Bannon-style populist slogans “Trumping” reasoned arguments extend far beyond the 2020 election cycle.

Indeed, before the Economist starts preaching ambitious “Manifestos”, it might aim a bit lower. Say, by helping its readers get good data.

One idea would be to call for a sound money; ergo, a stable currency/unit of account that could be used to better measure economic output. Insisting on solid accounting standards that make sure expenses and debts are properly recorded would help as well.

Unless the Economist’s elite readers get their facts straight, they will soon be dealing with a platoon of new populists that will make the Donald Trumps and Steve Bannons of this world look like Thomas Jefferson.

* One example could be government-issued currencies fully backed by gold, which in turn were held in check by a free market in private currencies that could objectively (through market trading) expose erosions in each other’s value.