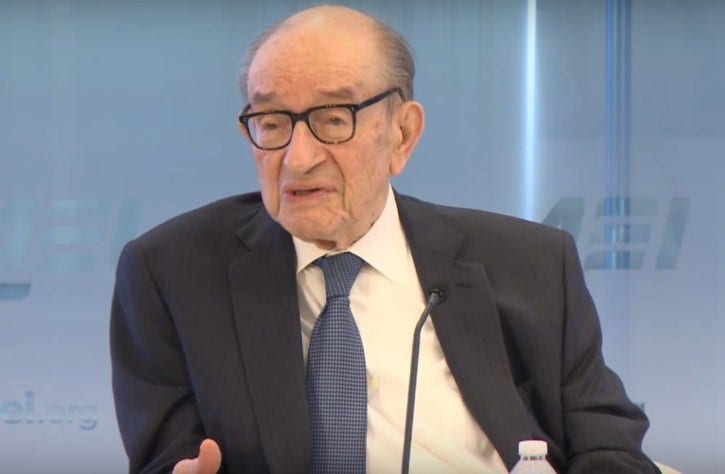 Alan Greenspan is probably one of the most qualified experts in financial bubbles. The former Federal Reserve Chairman oversaw system bailouts following crashes in 1987, 1994, 1998 and the early 2000s.

Experts however argue that the Fed’s easy money policies enabled risky behaviour. The resulting “Greenspan put” paved the way for today’s “everything,” bubble in stock, bond and real estate prices – the theory goes.

Greenspan refuses to acknowledge the scale of the carnage.

“Is this time different?” Greenspan rhetorically asked an American Enterprise Institute audience earlier this year. “No. It never is, if you are dealing fundamentally with human nature.”

Greenspan argues that there are certain stabilities in the way economies function. These are “deeply imbedded in human psychology which is invariant through time.”

“The rates of return on investment are fairly stable going back,” argues Greenspan. “The most startling statistic is that interest rates in fifth century ancient Greece are not all that different than they are today.”

The bubble is global in scale

However there are numerous signs that Greenspan’s overall thesis is flawed. The biggest difference is that today’s “everything bubble” is global in scale.

According to the Institute of International Finance global outstanding personal, business and government debts are now at an all-time high of $237 trillion. That’s more than 300% of GDP.

That means unlike previous bubbles, today’s “Maestros” (as Greenspan become known) are unlikely to be able to borrow their way out of this one.

No white knights on the horizon

Central banks – with interest rates near zero in real terms and loaded up balance sheets, - have almost no ammunition.

There is little room on the fiscal front either.

U.S. public sector spending already exceeds 60% of GDP, when all items are included. Any further spending increases would come from wealth extraction from the productive areas of the economy. This in turn would crimp productivity even further.

China, which bailed out the world by borrowing tens of trillions of dollars following the 2008 financial crisis to stimulate demand, is also tapped out.

Japan and Europe for their parts are in even worse shape than the U.S.

Greenspan’s biggest error lies in his lack of understanding of the colossal misallocations that his policies spawned.

Much of this relates to his confusion about monetary policy which today is far looser than even top experts realize.

Greenspan is correct that interest rates of between 2% and 3% occurred frequently in history including in ancient Greece. However rates would have to be far higher today to provide investors similar real returns.

For one, during those low rate periods in history, there was little or no inflation.

Lenders also did not have to pay taxes on the interest they earned.

Nor did fractional reserve banking exist to the scale it does today.

These factors, we argue, could be masking the scale of interest rate suppression by as much as five percentage points throughout the yield curve in the U.S. and possibly much more in other countries.

However the biggest difference between today’s bubbles and previous episodes has been the steady deterioration in economic signals.

The fact that global currencies are no longer backed by hard assets as they were during the days of the gold standard, means that there are no standard valuation metrics.

Nobody really knows how much a dollar is worth, and how its value has changed over time. That means nobody can objectively measure economic growth nor inflation (for example the Bank of Canada alone uses at least six different inflation measures).

With no reliable economic signals, politicians, economists and the public are forced to rely on their instincts to make decisions.

This time it is different

Greenspan’s broad arguments are correct on one count.

The world has seen systemic bubbles before. These include colossal runups in credit just prior to the French revolution, during the Weimar Republic and before the Great Depression.

The trouble is that few people alive today were around back them.

That means the current “everything bubble,” is different than anything most Americans have seen.

It also means few have any idea of what happened after previous bubbles of this scale imploded.