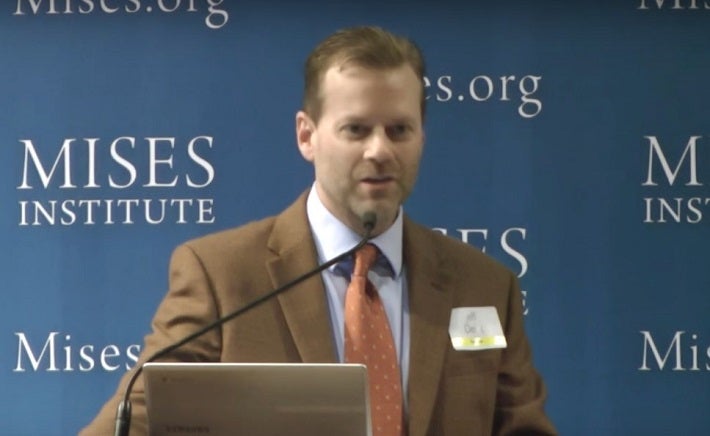 Global debts are rising, as is economic inequality. Bubbles abound. The Bank for International Settlements is warning of a potential synchronized financial collapse. Capitalism, particularly the richest 1% who have benefited from rising asset prices, appear set to take the blame.

Not so, says Jeff Deist, President of the Mises Institute, which will be hosting 150 students from around the world this Sunday in Auburn, Alabama, for a week-long session about free market economics.

“Mises was one of the giants of the 20 th century economics,” says Deist. “Yet his works are being systematically kept out by academic gatekeepers. Students who come to “Mises University” will learn more in one week about economics than they would in four years at an Ivy League program.”

Followers of Mises and the “Austrian Economics” school from which he emerged have a different take on current economic challenges, which they believe were caused by governments themselves, not by free markets.

Are governments the problem?

Free market defenders say that advocacy by mainstream economists (led by Nobel Laureates like Paul Krugman, central bankers like Janet Yellen and academics like Ken Rogoff) of near unlimited government spending, borrowing and, most recently, money printing, will go down as one of history’s greatest cons .

The works of Mises and later Murray Rothbard, who advanced and popularized many of Mises’ earlier ideas, provide academic heft to those arguments.

Indeed, backers of the Austrian economics school believe that almost everything being taught in today’s university economics program is wrongheaded. For example:

No such thing as “free money”

During the past 30 years, the US, European and other government central banks, backed by academia, have bloated credit markets by driving real interest rates to near zero.

Their goal was two-fold: to give public sector officials more money to spend, and to stimulate a “wealth effect.” This, they said, would generate more spending from which the benefits would “trickle-down” to ordinary folk.

Mises noted as early as 1912 in his book, The Theory of Money and Credit , that such policies are hard to dial back and could spark massive, generational, credit-spiked boom-bust economic cycles.

Economics is only a small part of human action

Mises also concluded that economics cannot be studied on its own, but must looked at in context of all Human Action, which became the title of his seminal work.

“Studied properly, economics is a social, not a mathematical science,” says Deist, who cut his chops working for Ron Paul, a recently-retired libertarian Congressman. “People are human beings, not automatons that can be programmed using formulas.”

Mises would have laughed at today’s mainstream economists, who build vast, theoretically-perfect, econometrics models, but ignore history, psychology and geopolitics and thus have no clue why their formulas don’t work.

(For example, neither the US Federal Reserve, the European Central Bank nor the Bank of Canada has ever successfully predicted a recession one year in advance ).

Focus on individuals, not groups

Mises also prized the role of the entrepreneur in creating new ideas and wealth. He would have been shocked at US Federal Reserve actions to prop up the banking, automotive and government sectors following the last financial crisis.

Mises taught that free markets only work when the lazy, the incompetent and the greedy face the consequences of their actions. However, those that created, missed or failed to prevent the 2008 recession and financial crises almost all kept their jobs. Many were promoted.

These underscore the increasing importance of Mises University, which due to its broader view of current challenges, could well be evolving into one of America’s most important economics programs.

Because history teaches us when the intellectuals fail us by preaching wrong-headed, self-interested and confusing theorems, the public turns to simplistic populists.

True, Mises’ work suggests troubling, hard conclusions regarding individual responsibility, particularly for recent generations, which have been taught to rely on governments to solve all of their problems.

Furthermore Mises’ free market ideas about saving (instead of consuming), entrepreneurship (as opposed to government spending) and sound (as opposed to printed) money, were so radical, he was never given a full-time paid position by a major university.

However the academic foundations of Mises’s teachings and those of the Austrian school, which are being taught at Mises University, are worth having a look at.

That’s particularly true during a time when the public seems ready to give more power and resources to the same governments that mortgaged their futures, as well as those of their kids and grand-kids.

Mises University will be streaming courses online between July 23 and July 29, 2017 at on its Facebook Live page and website: https://mises.org/events/virtual-mises-university-...

Mises Canada runs a similar program titled Rothbard University, which is being held between July 19th and 22nd, 2017.