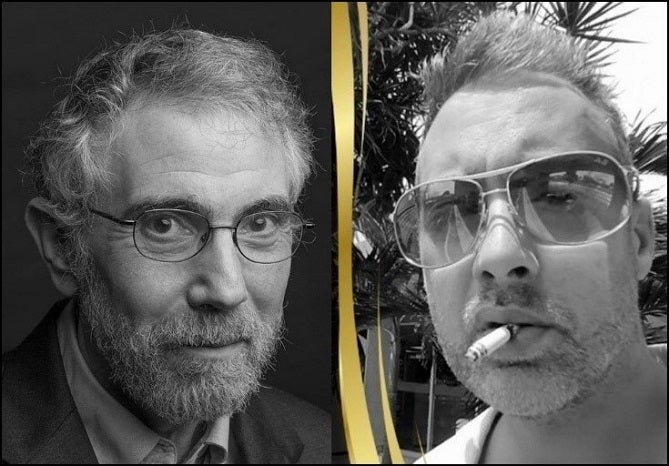 New York Times columnist Paul Krugman, a Nobel Prize Laureate and professor at the City University of New York is widely regarded as one of America’s top economists.

His recent description of the U.S. Administration as “Donald Trump and his team of Morons,” thus seemed unbecoming.

Public intellectuals aren’t supposed to flaunt their expertise. So, when they engage in name-calling rather than reasoned discourse, we know something is afoot.

Krugman made the remark in a column in which he chided Republicans for evils ranging from the government shutdown, to insensitivity and advocacy of tax cuts.

Yet while the Trump Administration has raised the temperature of debate everywhere, Krugman’s remarks coincide with a steady deterioration in his own analysis.

You can’t solve a debt problem by borrowing more

Even a high school graduate could tell you that Krugman’s consistent calls for increased government spending, taxation, borrowing and money printing, at a pace faster than GDP growth, amount to a de facto Ponzi Scheme.

So says Jeff Berwick, editor of the Dollar Vigilante newsletter and organizer of Anarchapulco, a liberty-inspired festival which took place last month in Mexico .

“You can’t solve a debt problem by borrowing more,” says Berwick, who completed high school with barely a 50% average. “At some point you have to face reality.”

Berwick’s comments mirror those of many ordinary Americans who increasingly realize that “expert” advice provided by Krugman and other dirigiste economists has gotten the country into quite a pickle.

“People perform better working together than when they steal from each other through taxes,” says Berwick. “That’s the difference between governments and free markets.”

An economics PhD versus weed

So why are Berwick and other seemingly ordinary folk making more sense than America’s brightest minds?

For one it is increasingly clear that mainstream economic thinking is bankrupt. Not a single major academic or economics practitioner foresaw the 2008 financial crisis, nor warned about it in a material way.

Part of the reason for this is the fact that the profession is hampered by increasing specialization.

This is particularly hard on econometrics practioners who have few opportunities for thinking – let alone asking questions – outside their assigned boxes.

Berwick chose the opposite path. The creator of Stockhouse.ca became a multi-millionaire in his early 20s. However, he lost much of his fortune in the dot.com crash.

When Berwick landed - with a big headache - in Acapulco just after the last financial crisis his accumulated on-the-ground experiences had zero value in academia.

However they provided the Dollar Vigilante founder with the distance needed to analyze the causes of the Great Recession and prepare investors for a recurrence.

The contrast with Krugman, whose academic record includes a doctorate from MIT and reams of peer-reviewed articles, couldn’t be more striking.

Take this typical Tweet, which illustrates the muddling complexity of Krugman’s thinking:

“In terms of modeling, the interaction between economic geography and trade means that the medium-term distributional impacts look more like specific factors - labor specific to particular industries - than the kind of broader distributional issues we often consider.”

Krugman’s weighty pronouncements recall the dystopia 1984, in which George Orwell described elite appropriation of terminology as “duck-speak,” because it sounds like ducks quacking and because the limited jargon prevents others from even expressing contrary opinions.

Today, in 2019, similar jargon obscures economists’ actions and makes the profession immune to outside scrutiny.

That process is magnified by use of formulas which contain so many variables – and which increasingly rely on questionable economic data – that they are essentially useless as forecasting tools, in fact even as theoretical models.

Berwick for his part has developed simpler “tongue in cheek” jargon to explain the American economy.

Berwick retorts that America – where public sector spending now accounts for up to 60% of GDP - can hardly be called a free market economy.

Krugman and other contemporary economists believe that voters, guided by the advice of Washington politicians and experts like themselves, develop consensuses about how to best allocate resources.

Berwick describes taxation as a form of theft by elites living in the “District of Criminals.”

Berwick’s most biting criticisms are levied at compulsory US public schools which he likes to “indoctrination camps,” for teaching students that there are no problems for which more government is not the solution.

Berwick also excoriates universities which teach little about financial management and have steered an entire generation of US students towards predatory lenders.

But his biggest warnings are for ordinary folk, whom he advises to take large positions in gold, mining stocks and Bitcoin, to hedge themselves against coming catastrophe.

Berwick’s lack of credentials doesn’t matter to Ron Paul, Tim Moen and the many other libertarians, crypto-enthusiasts and health activists who spoke on Anarchapulco’s five stages this year.

Sadly, Krugman was unable to visit.

The Nobel Laureate needed to develop new ideas to confront the global depression that is unfolding as a result of previous bad advice provide by him and his fellow economists.