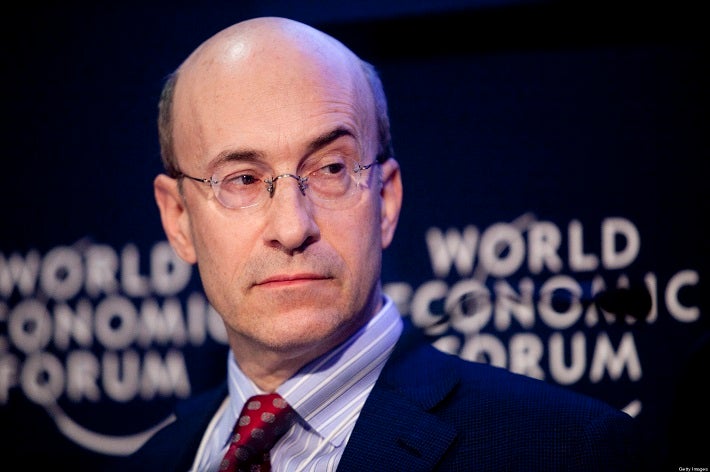 Ken Rogoff is by all accounts a brilliant man. The Harvard professor and former IMF chief economist is a chess grandmaster. His thesis committee included current Fed vice-chair Stanley Fischer. But like many survivors of Ivy League hoop jumping, the poor fellow appears to have emerged punch drunk.

That’s the only conclusion to be drawn from Rogoff’s new book, The Curse of Cash , which, in effect, proposes a ban on paper currency.

First, the cashless society, which Rogoff proposes in order to make it easier for the US government to confiscate private wealth, in effect, amounts to an admission that Washington can’t pay back its debts.

Second, the fact that Rogoff uses the fight against “terrorism” and “crime” arguments in selling his proposals to the public - justifications which he as a mathematician should know are farcical - suggest that his arguments hide another agenda.

Third, and most important, is the fact that not only would banning cash not achieve Rogoff’s objectives – it could cause irreparable harm to the dollar’s role in the American economy and as a reserve currency.

Let’s look at these arguments one at a time.

Rogoff's “cashless society” is an elegant solution to a key problem bedeviling the Federal Reserve: with interest rates at the zero bound, the US central bank has no ammunition left to fight the next recession - because if cuts rates below zero, savers will withdraw their cash and put it under their mattresses.

“In principle, cutting interest rates below zero ought to stimulate consumption and investment in the same way as normal monetary policy,” Rogoff writes. “Unfortunately, the existence of cash gums up the works.”

That argument is spurious at best.

By now, it is fairly clear from experiences in Japan and the US since 2008 that below neutral level interest rates provide little or no net new economic stimulus. At best, easy monetary policy brings forward spending and investment from the future into the present.

However, the US government and the Federal Reserve have spent, borrowed, and printed so much that there is no future left to mortgage.

Rogoff, one of the country’s top economists, knows this; which is an important clue that there is much more to his proposals than meet the eye.

It seems clear that Rogoff’s negative interest rate/cashless society proposal is structured to engineer a back-door US government debt default.

Over the long term, by forcing savers, businesses, and banks to give the US government their money, and allowing Washington to repay less of that money each year, the US can legally default – on all that it owes.

More worrying for investors: the fact that Rogoff, Ben Bernanke and others are proposing negative rates despite the considerable evidence that they will do no economic good suggests that they believe that the US government cannot pay back its debts – that it is already insolvent.

Rogoff’s recommendations would spur massive unintended consequences, some of which have already been effectively noted by James Grant in a recent WSJ/Zero Hedge piece .

In a preceding WSJ commentary , Rogoff provides the US government with excellent cover to sell a cashless society/backdoor debt default to the public by invoking fights against crime, terrorism and tax evasion.

“There is little debate among law enforcement agencies that paper currency … facilitates racketeering, extortion, drug and human trafficking, the corruption of public officials not to mention terrorism,” he writes. “It is no accident that whenever there is a big-time drug bust, the authorities find wads of cash.”

It’s an excellent argument which will work exceedingly well with an innumerate public, that has been scared to death by public officials ranging from George Bush the Younger to Hillary Clinton and Donald Trump, but one which to a math expert like Rogoff is ludicrous on its face.

The chance of an American dying in a terrorist attack is so small that mathematicians have a word for it: statistically insignificant. As for victimless crimes like drug use and prostitution, many Americans regard them as essentially morality issues, which have no more chance of being eliminated than alcohol use did during prohibition.

Another challenge that Rogoff overlooks in his econometrics models is that banning paper currencies will drive widespread acceptance of alternate forms of money ranging from crypto-currencies to precious metals, not just among underground economy even among the economic elites themselves.

One example: a brief look at Francois Boucher’s painting of Louis the 15th mistress Jeanne Antoinette Poisson should indicate what I am getting at. Poisson - who later became the Marquise de Pompadour - and mistresses like her who are essential accoutrements to wealth, don’t appear to compute in any economic model.

But mistresses cost money - a lot of money.

Prostitutes alone - the mistresses of the common folk - rack up $186 billion a year in fees according to one estimate ) all of which needs to be paid for in cash to avoid leaving paper trails that would attract jealous spouses, paternity lawyers, and law enforcement officials.

In the Harvard economics department, externalities like beautiful young women can easily be written off – but in the real world, banning cash will force the emergence of alternate currencies among a vast swath of the population, who would otherwise be law-abiding folk.

Is this really a job application?

Then again, maybe Rogoff is just as good a player on the public policy front as he is on the chess board. There is a possibility that he wrote The Curse of Cash as a quasi-job application for a higher government post, possibly as Treasury Secretary in a Clinton Administration.

“If you give me the job, I’ll help make sure that government can borrow all it wants and it won’t have to pay any of it back,” may be the sub-text to Rogoff’s book.

There is a precedent for this. Ben Bernanke’s 2002 “helicopter money” speech is widely credited with having set the ground for his appointment as Fed Chairman several years later.

Brilliant? Cynical? Delusional? Or maybe all three? Take your pick. Either way, you haven’t heard the last of Ken Rogoff.

artichoke
Reply
Negative interest rates would chiefly punish Americans like me. Internally, interest rates will be negative and Americans will find it difficult to save. The government slowly defaults on its domestic debts but not its foreign debts. Externally, if we owe China $10 trillion this year, they're not going to reduce that because we say the interest rate is negative. Remember that new USD 100 (which is the denomination of international use of the US dollar.) Gold on the right (that's for foreign creditors), scrip on the left (that's for us.)
Reply

mary
Reply
Rogoff is a capo. His ilk is why intellectuals are hated during revolutions--they give cover for the egregious crimes of the political class and their handlers. Too bad I don't believe in hell.
Reply
Leave a Comment

Weekly Wrap Up
1786
Two Steps Forward, One Step Back - Weekly Wrap Up
By Craig Hemke
News
1210
Inflation is Everywhere
By David Brady
News
120
The Fed Further Reduces Its Transparency
By Dave Kranzler