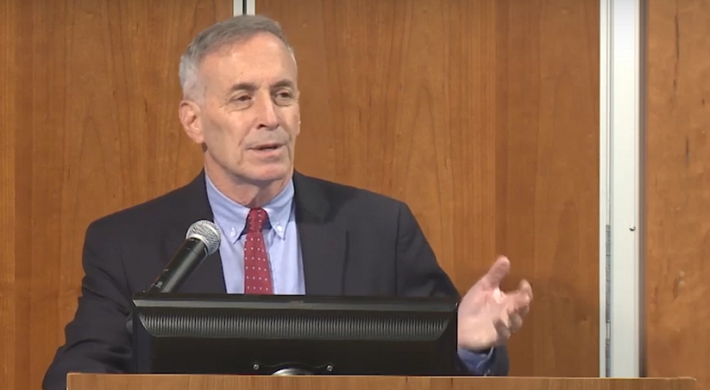 America’s 2017 fiscal gap will come in near $6 trillion, nine times higher than the $666 billion deficit announced by the US Department of the Treasury last week, says Laurence Kotlikoff, an economics professor at Boston University.

“Our country is broke,” says Kotlikoff, who estimates total US government debts at more than $200 trillion, when unfunded liabilities are included. “We are in worse shape than Russia, China or any developed nation.”

Worse, says Kotlikoff, who has testified before Congress, government officials are well-aware that many of America’s debts and accruing liabilities are being written off the books.

However, for the most part, they are keeping their mouths shut.

The upshot is a de facto “two-tier” financial reporting system, in which politicians and insiders have access to key data buried in footnotes about unfunded liabilities, which indicate that there are huge problems in the economy.

The public, on the other hand, in slews of Presidential and Congressional Speeches and publications, is led to believe that while things are tough, overall everything is OK.

According to Kotlikoff, a long-time activist for fiscal rectitude, the problem stems in large part from the fact that the US government has been spending almost all of Americans’ approximately $795 billion in social security payroll taxes to pay current bills, rather than investing them to fund retirees’ benefits.

The upshot is that on a net basis, the US government has no money to pay all the benefits that have been promised. Politicians know that defaults will occur, they just haven’t figured out how to finesse this.

Fiscal gap accounting: telling Americans how much government has borrowed

Kotlikoff, unlike most, has a solution. He believes that the US government should adopt what he calls “fiscal gap accounting”, which involves putting all future receipts and expenditures on its books.

The idea is that if Americans knew about all the money that their politicians were borrowing and spending, they would be able to make better decisions as to the usefulness of those policies.

They would also be able to better protect themselves.

If the US government produced a financial statement that listed the $200 trillion in unfunded liabilities that Kotlikoff says it owes, workers might make different decisions about how much they will save for retirement.

Sadly, current de facto US government practice - inspired by Keynesian thinkers such as Paul Krugman - is for governments to spend, tax, borrow and print as much money as possible, in an effort to keep the economy perpetually running at full steam.

The idea is to leave future generations to deal with the problems.

Kotlikoff and many others have been trying to change this.

More than 1200 of the country’s top economists have endorsed a bipartisan bill that requires the Congressional Budget Office to do both fiscal gap and generational accounting on an ongoing basis.

David Howden, a professor of economics and academic vice-president of the Ludwig von Mises Institute of Canada, describes economic theory as crystal clear as to how to measure government liabilities, namely using the infinite-horizon fiscal gap. He says that Kotlikoff’s reasoning is “pretty sound.”

In fact, the methodology has been tried before, by George Bush the Elder, who included fiscal gap accounting in some of his budgeting.

However, the Clinton Administration killed the practice and scored huge political points in the process.

Even today, decades later, few people realized that the only reason that the Clintons were able to balance their budgets was by not recording all of the US government’s debts.

When they saw that there was no political penalty to be paid for cooking the books, they jumped on the bandwagon, a policy that the Trump Administration continues to this day.

There are few pleasant takeaways from all this. True, some alternate fiscal gap accounting calculations suggest that things may not be as bad as Kotlikoff says.

Others says that the problem does exist, but by eliminating the pensions of those who earn above a certain level, or by postponing retirement dates, the system could be set straight again.

However even in the best of cases, Kotlikoff is correct on one crucial point: America is unable to meet its obligations as they become due. That is the definition of bankruptcy.

In a sense, it should hardly come as a surprise that politicians are hiding this fact.

Because if America is indeed in worse economic shape than Russia or China, voters might think twice about who they want to lead them.

Deficit Owls
Reply
"US government has no money to pay all the benefits that have been promised" Excuse me?? This is the US government we're talking about. It's where the US dollars come from. It can't "have no money." We could talk about whether inflation may or may not be caused if the government stands by these financial commitments, but "have no money"? "Defaults"? Pure fantasy, simply wrong, out of paradigm stuff. The government is the currency issuer, not a currency user.
Reply

Christoph Weise
Reply
"If the US government produced a financial statement that listed the $200 trillion in unfunded liabilities that Kotlikoff says it owes, workers might make different decisions about how much they will save for retirement." Unfortunately a worker can not safe enough money for retirement in a zero interest environment. At pension age 90% of the people globally will be poor or extremely poor.
Reply

The Truth
Reply
Good website for keeping track of the real amount govt. owes--see your "share": http://www.truthinaccounting.org/ Remember, China owns much of that debt--they have even increased their purchases lately--how does that make them "in better economic shape?"
Reply
View more

DoDeals
Reply
This discussion reveals a profound misunderstanding of how the fiscal monetary system works. The solution to our economic and social problems is a Job Gty as part of a Full Employment Fiscal Policy. The dog bullet points it for us here: http://mmt-inbulletpoints.blogspot.com/2017/09/im-just-responding-to-various-economic.html
Reply

The Truth
Reply
The government has taken money withheld from you and I for Social Security and used it for wars and general expenses--they have placed non-negotiable government promises "guaranteeing" that somebody will have to pay in the future (LOL). Great point Kay!
(1)
Reply

DoDeals
Reply
FALSE: See my blurb above. The gove doesn't need money from SS, taxes, or borrowing, in order to spend.
(2)
Reply

The Truth
Reply
Is your dog named John Law?
Reply

The Truth
Reply
http://thegreatrecession.info/blog/debt-trap-proves-great-recession/ The chart in this article showing GDP without the huge increase in Federal Debt in the USA recently, says a lot about presentation of economic "facts."
Reply
Leave a Comment