Last weekend, I shared a series of tweets outlining a potentially bullish posture being presented by Gold and Silver miners. Specifically, I cited gaps on the downside in each of the ETFs that likely needed to be filled before we head higher. As of yesterday, they have all been filled. I’m going to go through each of them and the key levels to watch to determine whether they are all going higher or lower next. 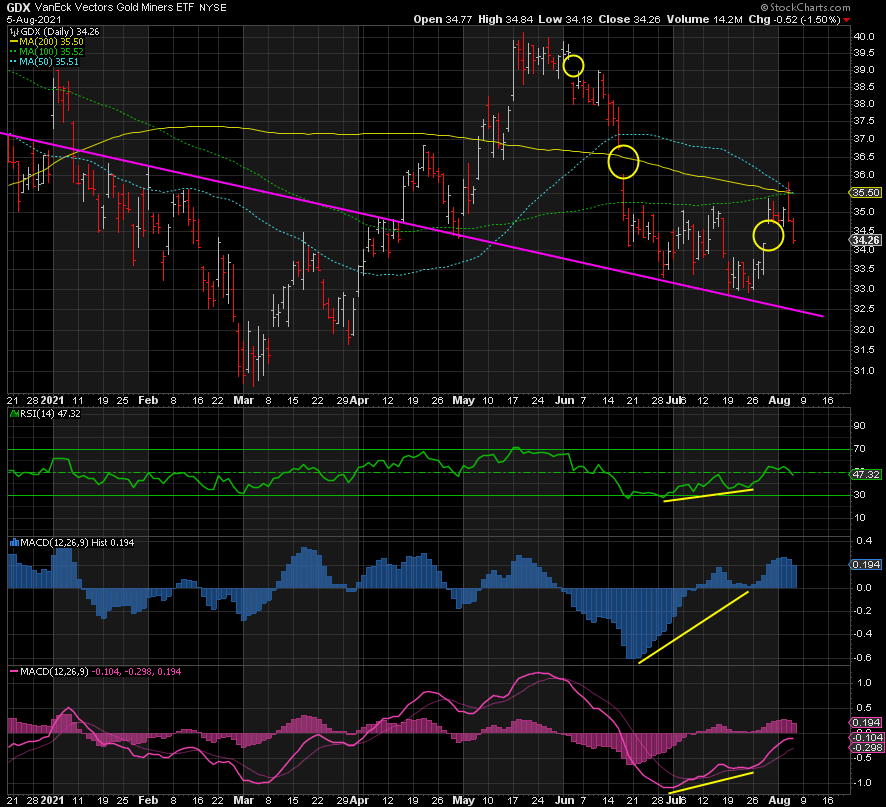 GDX bottomed out on July 19 at 32.87, right on trendline support in purple above.

The low at 32.87 was accompanied by clear positive divergences in the RSI and both MACDs.

Such confluence of support is extremely powerful and suggests the bottom is in for gold miners.

Alternatively, 32.87 must hold or we could be in for a far deeper dive. 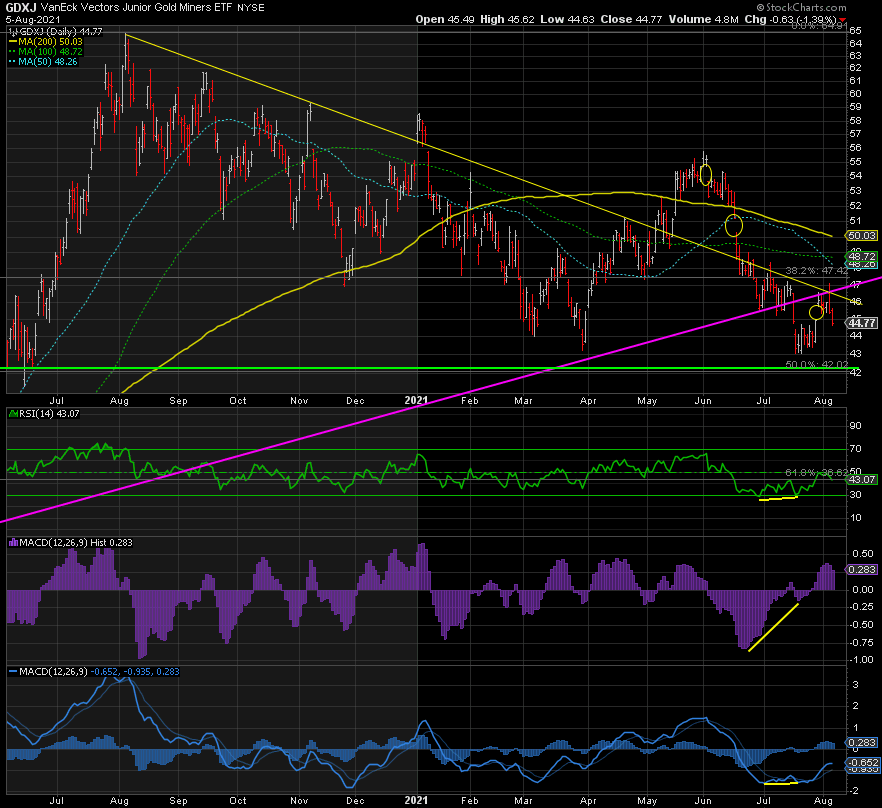 On the downside, there is the green support line at ~42 dating back to former resistance beginning in February 2017, and it has been a pivotal level ever since.

The ~43 support level represents a triple low on July 21, July 19, and March 30. It was also a positively divergent low on the RSI and both MACDs.

On the upside, GDXJ tested a confluence of trendline resistance at 46.60, broke it briefly, and fell back down. The first trendline in purple dates back to the low in May 2019. The second in yellow comes down from the peak last August. 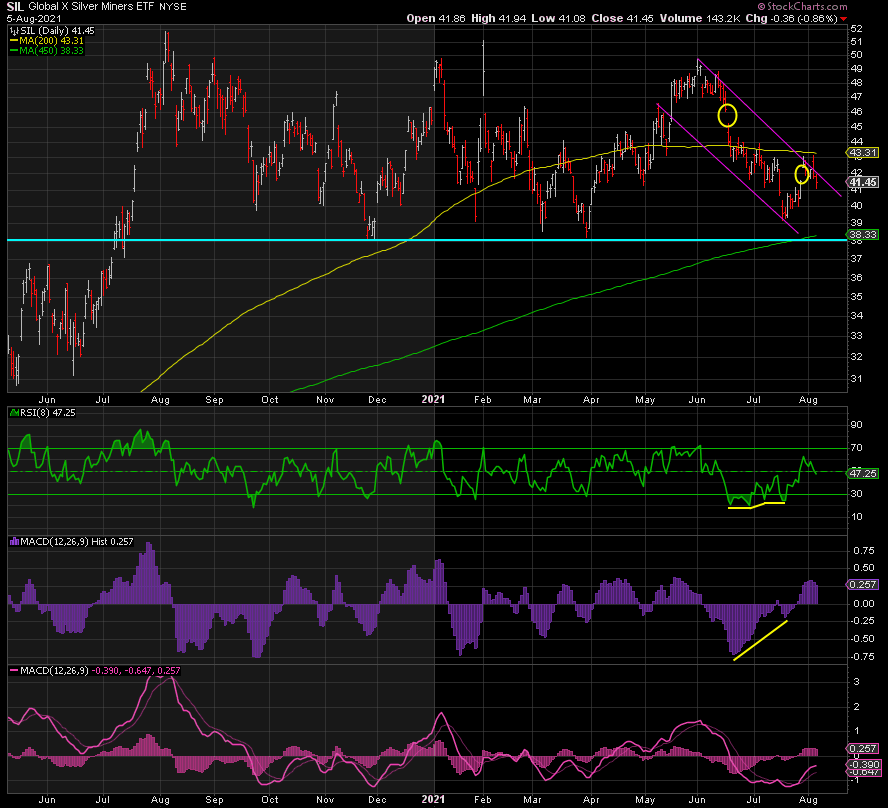 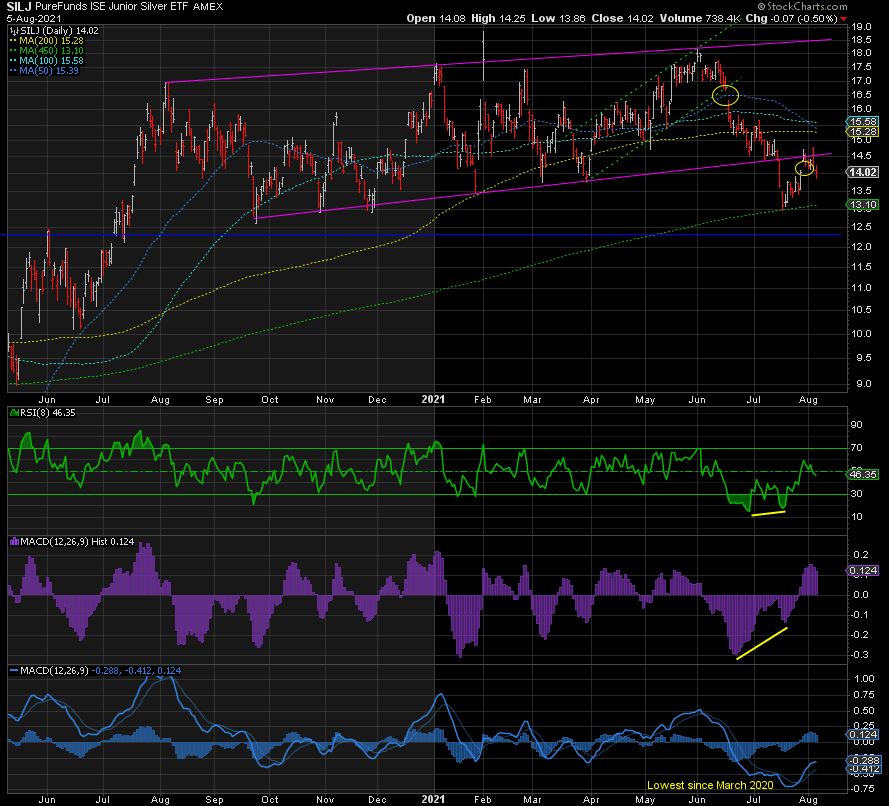 Last but not least, SILJ also closed its gap yesterday at 14.09.

Support was confirmed at the 450-day MA at ~13 on July 19. Below there and things could get ugly fast.

But just like the gap on the downside was a magnet for closure, there is also a gap to be closed on the upside at 16.67 from June 16. It’s only a matter of when that gap is closed too. The same goes for all of the mining ETFs.

In summary, we got the expected closure of the gaps on the downside across all of the ETFs today. The RSIs are back to or below the neutral 50 level, creating fuel for a further assault higher. The MACD Lines are trending higher from extreme lows in all cases. All have gaps to fill on the upside too. In order for this to happen sooner rather than later, we cannot break the key support levels provided here.

Bigger picture, I still see the rising risk of a disinflationary period coupled with a marked slowdown in the economy and a drop in stocks in the next few months or so. This would likely weigh on metals and miners in the short-term, much like in March 2020. However, anticipation of fiscal and monetary stimulus on steroids would soon send Gold, Silver, and the miners to new highs, imho.