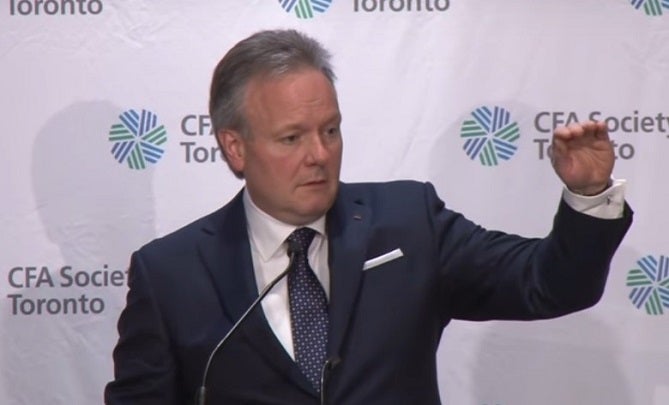 “Is there a Poloz Put?” the central bank head asked rhetorically. “No.”

At first glance, the fact that only one BNN Bloomberg producer and a few smaller media picked up the story is hardly surprising.

Canada is a mere bit player in global central banking and financial markets, and the opinions of any Canadian official generally carry little weight outside of local circles.

However, in December 2017 Poloz provided investors a similar warning about Bitcoin, then trading near its all-time high, but which subsequently fell by more than 80%.

Investors would thus be foolish to ignore him now.

First, a little background. The idea that governments are key drivers of stock prices may appear ludicrous to those who believe that Western economies are free markets.

However, as Moody Analytics notes, higher asset prices and resulting wealth effects are one of the Federal Reserve’s main policy tools for achieving its inflation and economic growth targets.

For U.S. stock traders operating today, most of whom have never seen a crisis that government hasn’t bailed them out of, the Fed’s most important manipulation is the existence of a tacit “put,” which ensures that asset prices won’t fall too far.

The Bank of Canada’s policies are less overt. While the central bank claims that it “does not target asset prices,” asset price manipulation is clearly direct “collateral damage” resulting from its other policy objectives.

Poloz admitted as much earlier this year in a press conference at Queen’s University , when he noted that the wealth effect generated by rising asset prices is “fully articulated” in the central bank’s Terms-of-Trade Economic Model ( ToTEM)).

No “BoC put” implies no “Fed put” either

The fact that Canadian monetary policy closely tracks U.S. actions means that The Bank of Canada could only refrain from backstopping crashing markets if the Fed held back too.

This raises the question of whether Poloz’s denial of the existence of Bank of Canada backstop is credible?

For one, the credibility of almost all central bankers is currently near zero for anyone who is not paid to believe them.

For example, no global central bank has ever predicted a recession one year in advance.

In addition, the Federal Reserve, which issued trillions of dollars in covert guarantees during the last financial crisis, often acts in contradiction to its public statements, as do most other central banks.

Others—such as the Swiss Central Bank, when it guaranteed the franc’s peg with the euro one trading day before it was lifted—blatantly mislead investors.

An intellectual … but not necessarily an idiot

That said, the Bank of Canada, which earlier this year picked up a Central Bank of the Year Award, has several things going for it.

These include an ability to punch above its weight, due to Canada’s huge in-ground gold reserves, which the government could seize at any time.

Furthermore, the Bank of Canada’s people—including former Governor Mark Carney, who now heads the Bank of England—are in high demand in both the public and private sectors.

Another key BoC asset is Poloz himself, who occasionally provides signs that he is no mere Talebian Intellectual Yet Idiot.

Although the poor fellow is burdened with a Ph.D. (which is usually a contra-indicator of actual economics knowledge), Poloz’s dissertation about currency exchange rates won wide acclaim and quickly labelled him as a man to watch.

The Bank of Canada Governor also brought to the table long stints at BCA Research and Export Development Canada, which provided him broad on-the-ground exposure to business, financial markets and trade issues.

More intangibly, Poloz displays a quick wit and ever-present sense of humour, which signals an ability to analyse a situation from outside the box.

As such, there is a possibility that Poloz may have unintentionally lurched into the truth.

For example, central banks may have so exhausted their policy tools that they are simply no longer able to backstop markets (although the BoC denies this).

“To be absolutely clear, I am not giving investment advice,” said Poloz, prior to making his Bitcoin comments, which proved to be the most prescient prognostication of any Canadian analyst that year. “I never do.”

With that caveat in mind, investors ignore Poloz’s latest comments at their peril.

MASTER OF UNIVERSE
Reply
Following Powell is awkward but raising rates is the only way to normalize. One cannot plausibly argue with a Central Banker that is actually raising the CB rate incrementally in juxtaposition to the Greenspan era of 'puts'. Undoing the Greenspan legacy is Job#1 for the Western CB. Avoiding more QE Infinity keeps them from becoming Japan mired in intractable debt-to-gdp trap not unlike The Borg. MOU
Reply
Leave a Comment