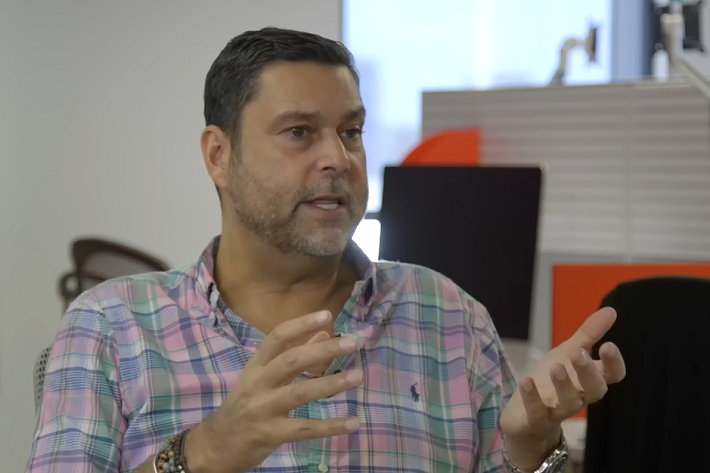 Raoul Pal, one of the most effective critics of mainstream economics, is cashing in his Bitcoins. Gold is a better wealth preservation tool, says Real Vision Television’s co-founder.

Yesterday Pal, who once thought that Bitcoins could eventually be worth as much as $1 million each, informed Real Vision Publications subscribers that he was selling the digital currency.

“Bitcoin not a store of value people thought it was,” he told Sprott Money News, in a telephone interview this morning from his Cayman Islands home. “If core developers are talking about changing the Bitcoin code or how it works, what happens if – at some future point – they decide to allow the number of coins to expand?”

Pal also cited lack of a Bitcoin “killer app,” and the commoditization of blockchain technology – as new players chip away at the market – as motivating his thinking.

Those who have been following Pal’s advice regarding Bitcoin, which he has been pushing hard on Real Vision TV – through the prominence that he has given sector advocates, such as Trace Mayer – haven’t done that badly.

The digital currency is up more than tenfold in the last two years.

Mainstream economics “does not work in the real world”

However, Pal’s dimming view of Bitcoin is particularly important to gold investors, because he and partner Grant Williams, in their legacy platforms and the recently-launched Adventures in Finance podcast series, have been among the global financial system’s most astute critics.

Pal is particularly vociferous about the opaque econometric models pushed by mainstream academics and central bankers, who don’t sufficiently warn the public of the dangers involved.

He cites economists’ use of the qualification “ceteris paribus” (which means “all other things being equal”, but which, Pal jokes, really means “it does not work in the real world”).

This, despite the fact that while insiders understand the jargon, profession politicians and the public are left insufficiently informed by economists about the risks of policies such as rising debts and quantitative easing.

Pal’s call is also important for another reason: if Bitcoin’s allure as a store of value and a hedge against systemic collapse is dimmed, this would increase the relative value of other solutions.

That includes gold, for which Pal’s partner Grant Williams has been a particularly strong backer.

Pal’s fascination with Bitcoin echoes that of many alternative investors, who seek a hedge from what some suspect is a “Krugman Con” - sustained long-term increasing government spending, borrowing and money printing at a pace that exceeds economic growth.

Bitcoin met many of those hedging characteristics. Despite its wild fluctuations, the digital currency provided a partial store of value outside the banking system and its encryption technology reportedly kept away prying eyes.

However Pal’s concerns with the digital currency barely scratch the surface of the increasing risks that Bitcoin investors face – particularly at a time when its hockey stick chart pattern practically screams “bubble.”

(According to chart compiled by Coinmarketcap.com, the market capitalization of the top ten cryptocurrencies as of June 2, 2017 exceeded $75 billion).

For one, an astonishing number of investors – including this writer – have a hard time getting their minds around key Bitcoin concepts.

These range from how data mining (the process through which Bitcoins are created) is done, to who is behind the various Bitcoin exchanges (this writer could not find a single Canadian operator to speak on record for a recent article), and how good the platform’s encryption is.

Despite Pal’s pessimism about Bitcoin’s future, the alternative investment guru admits that the digital currency “may go up in price, maybe a lot more,” before its ultimate future is decided.

But Pal won’t be going along for that last leg.

HUGO SALINAS PRICE
Reply
1. Bitcoin and other competitors have no ancestry: all currencies in the world are, fundamentally, devoid of any relation to a tangible value; their present values are derived from their original values as representatives of defined quantities of gold, or in some cases, silver. The Bitcoin has no ancestry from which to enjoy a derived value. 2. All currencies in the world today, have a "Godfather", which is the Central Bank that issues them and which looks to preserve their value, by not allowing them either to appreciate too much, which would harm national exports, or depreciate too much, as this brings on inflationary problems and related social disruption. The Bitcoin and imitators have no "Godfather" to care for their value (which is entirely imaginary). 3. This is a modern manifestation of the Madness of Crowds, which led to the great Tulip speculation. Reliance on the Bitcoin is reliance on the continued behavior of a mass of people. Like a stampede of cattle, the Bitconi stampede can change direction at any moment - and choose to go over the precipice. 4. The Bitcoin and competitors reveal the enormous ignorance and confusion about what money is and has to be, which reigns in the world today. "CAVEAT EMPTOR" - "BUYER BEWARE".
Reply

Tom Mornini
Reply
> If core developers are talking about changing the Bitcoin code or how it works It's been changed over 14,000 times: https://github.com/bitcoin/bitcoin/commits/master > what happens if – at some future point – they decide to allow the number of coins to expand? The core developers can change the code, but they cannot make individuals -- who operate and validate the network -- run the changed code. Bitcoin only changes if the majority of people wish it to change. If you think gold has a more stable supply than Bitcoin, you should look into robotic undersea mining. It's quite clear that the amount of gold in circulation will approximately quadruple this century: https://www.nbcnews.com/mach/innovation/these-fearsome-robots-will-bring-mining-deep-ocean-n724901 https://www.rt.com/business/321669-china-gold-seabed-discovery/
Reply

Randy Gaumond
Reply
Oh, so this supposed economic genius has finally had a light bulb go on over his pointy head, and he's beginning to see what I have been saying way back in 1996, that you cannot create real wealth out of thin air (electronic bookkeeping entries) or "money" out of some old rags and ink (fiat paper currency)? Will wonders never cease!! Maybe now he will wake up the rest of the way, and see that what we call inflation is really just a decrease in the perceived purchasing power of a fiat paper currency! I'd sure like to see his head full of mush pop open when he realizes that happy little fact!
Reply
Leave a Comment

News
353
The Convicted Criminals of JP Morgan
By Craig Hemke
News
1924
Higher Highs Ahead but Running Out of Steam
By David Brady
News
1007
After The CPI, Watch the Bond Market
By Craig Hemke