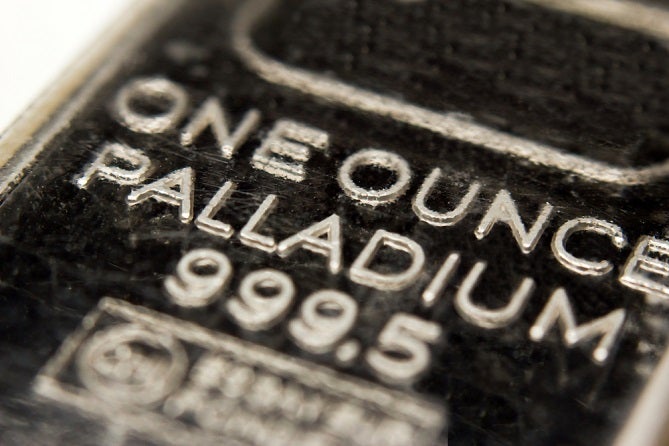 Palladium just hit a new all-time high. The trend is clearly up. Bulls cite “Russian Supply Concerns” as the reason. Russia is one of the world’s top producers, and growing tensions with the U.S. may result in a “supply crunch”. Palladium is widely used in the automotive industry and is experiencing significant demand. So it’s primarily a fundamental argument. The problem I have with this, specifically, is the demand side of the equation. Car loan originations and auto registrations are already decelerating. What happens to demand if the stock market crashes and is followed by a recession? Have you seen the stock market lately?

Palladium has experienced massive meltdowns in the past. In 2001, it began an 85% decline over the next two years. In 2008, it fell 76% in just nine months. Both sell-offs were associated with stock market crashes and/or recessions. Could it happen again? Sure it could. Setting fundamentals aside for the moment, everything else is pointing to lower Palladium prices right now. There are negative divergences everywhere at these new all-time highs.

Following a 33% rally in just over two months, we’re now seeing massive negative divergences on the daily RSI and both MACDs. Only a matter of time before those matter, IMHO

Negatively divergent on the RSI and MACD Line from a weekly perspective also. The MACD Histogram was last higher in February 2008.

Negatively divergent on all three momentum indicators from a monthly perspective also, dating back to 2001.

Negatively divergent from a DSI perspective also. Now 85, prior high 90 on September 20th.

Open interest is important because it peaked at exactly the same time as price in January, i.e. it signaled the following dump.

Although open interest collapsed to next to nothing, it has been soaring off its low. However, the price set a new all-time high, while open interest is still ~40% off its prior peak. That’s negatively divergent.

Money Managers, or “Funds”, paused increasing their longs last week but likely continued this week. Commercials are adding to their shorts too. But both of these positions are still 60-70% off their prior peaks when price also peaked and are therefore also negatively divergent at the new all-time high.

Finally, the rate of increase in both Funds’ and Commercials’ positions was the second fastest ever on an eight-week basis. Another sign of a pending, potentially major top.

Palladium could continue higher, but it could also be approaching a peak from which it will collapse or at least drop 10-20%.

With this data in mind, let’s look back at the two previous meltdowns in Palladium to see if there were any similarities.

The monthly chart showed the same negative divergence on the RSI and the over-extended MACDs.

Daily: Palladium showed multiple negative divergences on the RSI and both MACDs before collapsing. Breaches of the 200D MA and the prior high were clear signals of the breakdown, in retrospect.

There was no sentiment data available for Palladium until 2013. With regard to the positioning data, the size of the positions were so small in 2000 and 2001 and the data intermittent, rendering it invalid, IMHO.

The monthly RSI was also overextended at 80. The MACD H was negatively divergent. The monthly MACD Line was also at its highest since 2001. (chart above)

Daily: Much simpler than 2001. The RSI and both MACDs were all at extreme levels at the same time, their highest since 2001.

The peak on February 28 th, 2008 was synonymous with a peak in both open interest and commercials’ net short position. We saw similar peaks on January 9, 2018, just before the peak in price on January 17 th.

Fast-forward to today and we’re seeing negatively divergent higher highs in price relative to open interest and commercials. All of them could go higher, but we could also be seeing a similar negative divergence to that in 2000 and 2001, which would mean prices are set to fall.

Also note from an inter-market and fundamental perspective: both meltdowns were synonymous with stock market crashes and/or recessions.

This is where the demand side of the equation comes in. A sharp decline in Palladium would make sense, especially if we’re about to get a ~30% decline in stocks which could also be followed by an economic recession. Crashes are deflationary by nature, but car sales in particular could plummet if a recession follows. And I am not referring to just the U.S. but a global stock market crash and economic recession. Just the increasing risk of such an outcome, whether it happens or not, would likely weigh on Palladium prices. The metal may fall ahead of time or at the same time. Either way, the risk-reward is clearly lower from here.

The only caveat is that Palladium is already anticipating a Fed reversal in policy post crash, but I doubt that. We’re not seeing similar moves in Gold, Silver, or Platinum.

In summary, the supply-demand argument may have supported the recent rally and continue to do so, but there are numerous technical, sentiment, positioning, inter-market, and fundamental warnings signaling caution ahead. It can be unwise to chase price when it hits all-time highs, but that appears to be particularly the case now. I expect at least a significant pullback if/when U.S. and global stocks crash, but in the worst-case scenario we could see a meltdown like those in 2001 and 2008.

In my humble opinion, Palladium, like almost everything else except the dollar, is a “buy” when the Fed reverses course on its monetary policy. Until then, be mindful of this risk to the downside.

Jeff Boyd
Reply
What about Chinese demand due to new emissions control requirements? Is it already "baked in" so to speak?
Reply
Leave a Comment