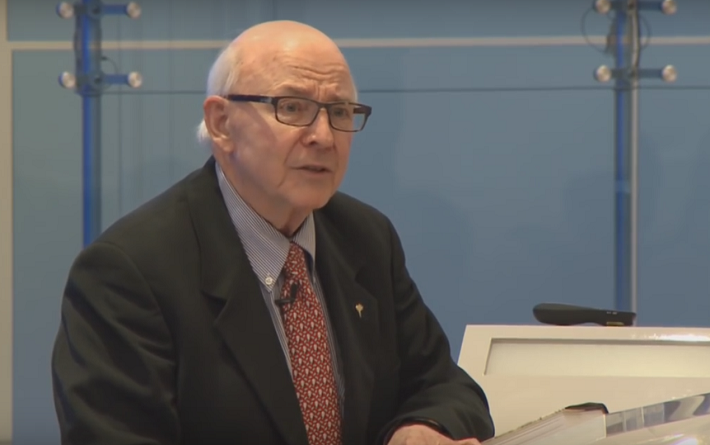 When Janet Yellen, Chairman of the US Federal Reserve, said in June that she does not expect another financial crisis in our lifetime, eyebrows were raised.

None more so than Richard Sylla’s.

Sylla, a professor emeritus at the Stern School of Business and co-author with Sydney Homer of the magisterial A History of Interest Rates, has studied past business cycles. He is thus able to put today’s events in a broader context.

“A lot of the same things are going on right now as before the 2008 crisis,” said Sylla, who puts the probability of a repeat, in our lifetimes, at between 70% and 80%.

“People figure that central banks avoided a Great Depression last time and can do it again,” said Sylla. “So they are not worried.”

The most important price in the economy

Sylla’s work is particularly important because interest rates, which have a direct influence on all economic activity, are simply the most important prices in the economy.

Interest rate levels also affect the real prices of cars, as well as all other consumer, business and government purchases - hence the ever-present temptation among policy-makers to keep rates low.

US Treasuries: yields at least 8% in a free market?

History provides a hint of the scale of the Fed’s current interventions, which could be depressing interest rates by at least 5.0 percentage points across the yield curve. The result is the transfer of trillions of dollars a year from American savers to borrowers.

As Sylla and Homer note in A History of Interest Rates , British Consuls' perpetual bonds yielded between 2.5% and 3% during much of the 100+ years that the British Empire was at its peak.

Their long duration, during a time when currency was backed by gold, provide a suggestion of where natural interests rates would be in a free market environment.

In fact, those British Consuls traded not too far from where US 30-year treasuries are currently trading (just under 2.9%).

However, there are huge differences. For one, Treasuries today trade during a time of high inflation, particularly in asset prices.

Furthermore, bond investors today are at unprecedented risk of government default, and, in a free market, would almost certainly demand a premium.

Finally, Treasury holders (unlike investors in British Consuls, when they were first issued) are taxed on their profits, often at the highest marginal rates. In a free market, investors would surely demand a significant premium as compensation.

To give an idea of what US Treasuries would trade for in a free market, you’d take their current yields (approximately 3%), add an inflation compensation (say 2%+), a risk premium (of at least 1%) and compensation because interest payments are currently taxable (a rough guess of say 2%).

This suggests that Fed manipulations are currently depressing yields on US 30-year Treasuries by 5 percentage points, an effect which extends, to various degrees throughout the yield curve.

If we apply that rate to all $47.9 trillion in US non-financial debt, as per the Fed’s Q2 Z.1 Flow of Funds report, that suggests that government manipulations are transferring $2.4 trillion each year from savers to borrowers.*

Sylla’s warnings are particularly important as America’s public schools and universities teach students almost nothing about history. That applies to economics professors, who focus almost exclusively on econometrics models.

Few economics programs teach detailed courses about the German and French hyperinflation episodes (which led to the rise of Hitler and Napoleon), let alone about Greek and Roman financial history.

Economics academics thus head confidently into government often without a clue as to the damages that fiat money and low interest rates can cause.

The upshot is that the US and other global governments and central banks have been systematically following the same high taxation, spending and money printing policies that in the past have led to disaster.

The prevailing assumption remains that “this time is different.”

Sylla worries that current central bank financial repression policies, which have kept interest rates artificially low for decades, have created massive mal-investment and an unstable situation in which threats abound.

These include cyclically-adjusted price-earnings ratios on US stocks, which are at highs not seen since the tech bubble and the 1929 stock market crash. This comes during a time in which record personal, business and government debts, put limits on possible flexible responses.

As if that weren’t enough, massive derivative books, which by some estimates contain more than $1 quadrillion of mostly-hidden contingent liabilities, leave investors and policymakers uncertain as to who they can trust to honor payments during times of uncertainty.

Hopes for a long life

Sylla attributes much of the challenges in the current system to the US government’s 1971 decision to stop backing its currency with gold, a decision replicated by governments around the world which enabled them to borrow and print almost without limit.

The result was the current huge imbalances, a situation made worse by the fact that the general public, blinded by indecipherable central bank communications, has literally no idea of the stakes and risks.

However as Sylla coyly admits, while another global financial crisis will almost certainly come within “our lifetimes,” the key question is “how long that will be?”

The venerable historian did not volunteer his age. However a “back of the envelope” calculation suggests that Sylla, who completed his undergraduate degree in 1962, is approaching 80.

Americans who worry about a repeat of the 2008 events during the ageing academic’s lifetime had better hope he has many more good years left.

* These are rough calculations. Comments from readers who can fault/refine those estimates would be much appreciated.

Jsturtevant
Reply
The table is certainly set for another severe crisis that takes Yellen and company completely by surprise. Unfortunate.
Reply

Dumb Broker
Reply
The 8% figure assumes the current yield of treasuries doesn't already include anything for risk premiums and inflation already. I think you are right though, but the reason why Investors can't demand 8% is because their is far too much central bank created liquidity in the system. If you are a bond manager and the market has a strong demand for your money, you would get to be picky and choosy, that is not the case when the cost of money is artificially cheap thanks to the morons who are making this mess. The Fed is obsessed with CPI, but what about housing CPI or Stock inflation. They assumed this would lead to a demand pull inflation, it did, just not in the asset classes they wanted to...
Reply

don
Reply
I enjoy your (and Sylla's) logic, accuracy, straightforwardness and concise statements. Putting together several factual statements and comparing them to history is certainly enlightening and acknowledges reality.
Reply
Leave a Comment