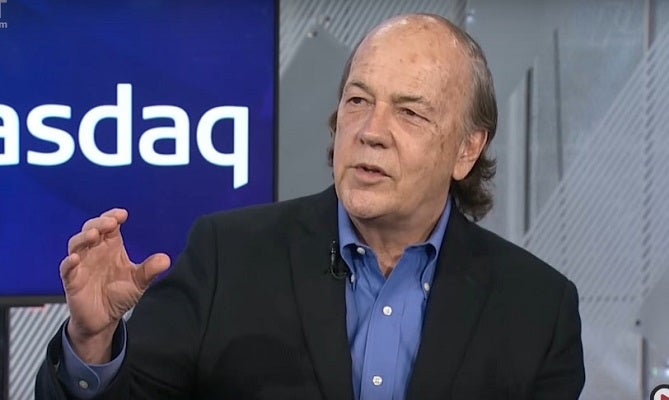 James Rickards, who has been warning about fault lines in America’s financial system for more than a decade, is one of the country’s most forward economic thinkers.

The prolific writer mixes with big bank board members, CIA spooks, and grubby miners in the Val D’Or Quebec pits.

After four major works—including Currency Wars, The Death of Money, The Road to Ruin, and The New Case for Gold—you’d think he’d run the gamut.

In his latest book, Aftermath, Rickards updates readers on his thinking and doubles down on his forecast that gold prices, up 25% since we published his initial prognosis in 2016, will hit USD $10,000 per ounce.

Rickards believes that the U.S. economy is already in a depression as defined by John Maynard Keyes, which is a sustained period of sub-par economic growth.

This fact is masked by the reality that U.S. statistical agencies have redefined the way they calculate the unemployment rate, which would in fact be above 10% using previous methodologies.

Rickards’ key message—which makes him a perennial favorite at gold conferences (including, full disclosure: numerous Sprott events)—is that investors should hold 10% of their investable assets in gold, to act as a hedge against coming catastrophe.

This, he says, will come from a variety of factors ranging from a 60% stock market crash, to multiple decades of economic stagnation, to the collapse of major U.S. banks.

Rickards says financial institutions are far more vulnerable than they appear, because much of their derivatives trading is now done through clearinghouses whose debts they are collectively liable for.

Longer-term, America will be particularly hard-hit if oil begins to be priced in IMF-issued special drawing rights, as Russia, China, Iran, and Turkey combine to force accelerated de-dollarization.

In Aftermath, Rickards assigns greater probability to deflationary pressures than he did in previous works, and thus recommends a 30% cash allocation to enable investors to profit from any downturns, with the balance of the portfolio going into equities.

Rickards figures that by using this “barbell” investment strategy, investors will be protected against wild portfolio fluctuations during a time when, for most investors, return of investment is a bigger priority than return on investment.

For example, if gold prices were to fall 20%, an investor who held 10% of his portfolio in gold would register a related setback from the category worth only 2% of his overall holdings.

On the other hand, due to gold’s counter-cyclical properties, a fall in prices would suggest that the investor’s other asset classes are doing much better.

Rickards, who also edits the Strategic Intelligence newsletter, thinks in multi-year and often multi-decade cycles. This, however, poses certain challenges.

One of these is dealing with friends, clients, and readers who want to know what day the economic reset—which smart money managers think is coming—will happen.

(Rickards says he has never met a major hedge fund manager who did not personally own gold.)

Rickards likens accumulating system debts, central bank stock market manipulations, and financial institution off-book derivative trading to piling snow on a mountain. Just one snowflake will set the avalanche off—you just never know which one that will be.

But during the next crisis, the central banks themselves will need to be bailed out, says Rickards, possibly by the IMF and through hyper-printing of a global currency.

All of this, he says, would be highly inflationary and thus boost the value of hard assets relative to paper claims.

fazsha
Reply
"For example, if gold prices were to fall 20%, an investor who held 10% of his portfolio in gold would register a related setback from the category worth only 2% of his overall holdings." Yes, but that also means if gold went up 50% but he only held 10% of his portfolio in it he would only gain 5%, and if gold went up that much it would probably indicate inflation would be at least 5%. Which is why I don't hold merely 10% in gold; it's not going to save you. You have to do better than that.
Reply
Leave a Comment