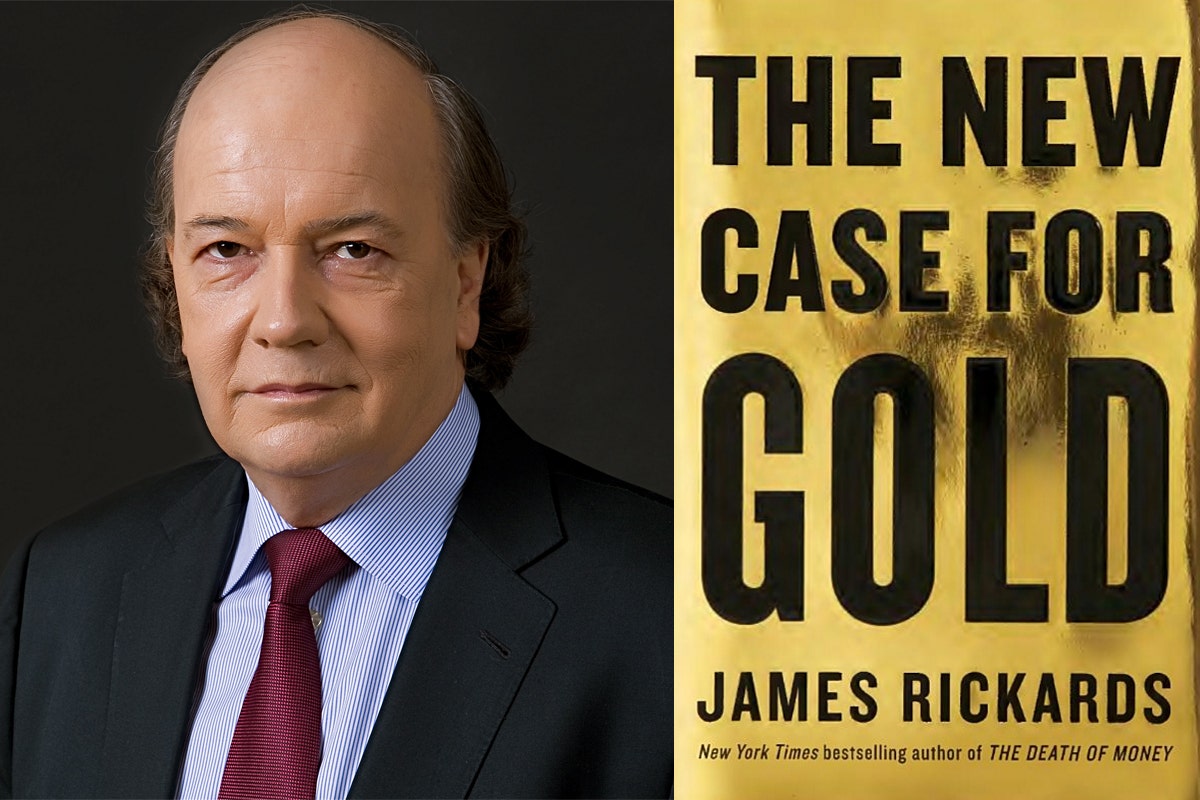 In his new book released yesterday, Jim Rickards, one of the most astute observers of the modern financial system, predicts that the gold price will rise to $10,000 per ounce. In The New Case for Gold [1] the author builds on arguments made in his two previous books, Currency Wars and The Death of Money, which suggest the public is losing confidence in paper money and will demand a form of gold standard.

Rickards targets the work at “antigold giants (such as Paul Krugman, Nouriel Roubini and Martin Feldstein) [and] a younger generation educated (or miseducated) to believe that gold has no place in a monetary system.”

Rickards calculates the $10,000 per ounce level by estimating the M1 money supply for a basket of nations, and assuming a 40 percent gold backing. While Rickards has made similar calculations in his past work, The New Case for Gold is the first book in which he has gone on the record with a hard projection. Rickards also notes that a projected gold price calculation using M2 as the target money supply, with 100 percent backing, gives an implied $50,000 per ounce level.

Rickards’ new book was partly inspired by a minority report titled The Case for Gold [2] . This report was written by Ron Paul and Lewis Lehrman for the US. Gold Commission, which was set up by the Reagan administration during the early 1980s. Paul, who dissented from the commission’s findings that a gold standard was not needed, later had his report published as a book by the Cato Institute.

Rickards updates many of those reports’ arguments based on developments of the past three decades, many of which are well-known to the hard money community. These include the explosion of government spending and borrowing and printing money, which have paralyzed the global economy to the point that preservation of wealth is now far more important to astute investors than attempts to expand it.

In that context, gold – which has been a historical store of value for centuries – increases in relative importance, as do other monetary metals such as silver, platinum, and palladium. Rickards suggests that investors hold about 5 to 10 percent of investible assets in physical precious metals held outside the banking system.

Rickards’ two most convincing arguments relate to the fact that global central banks are rapidly losing credibility, and that increasing bans on the use of cash are forcing savers to keep money in an increasingly vulnerable digitized financial system. Recent actions of the Federal Reserve, ECB, and other monetary authorities, which essentially involve massive wealth transfers of wealth from savers to borrowers, are particularly questionable, not only for their fairness, but also for their efficacy.

As Claudio Borio, head of the BIS’s economics department noted in a Q1 report, “the latest turbulence has hammered home the message that central banks have been overburdened for far too long post-crisis. Market participants have taken notice. And their confidence in central banks’ healing powers has – probably for the first time – been faltering. Policymakers, too, would do well to take notice.”

That said, Rickards’ concerns that digital forms of money leave savers and investors vulnerable to hackers and international governments – who can supposedly wipe out their savings with a click – is less convincing. Rickards overlooks a far greater danger: savers’ vulnerability to their own governments seizing their assets through the use of negative interest rates.

Conspiracy Theory: Is the Fort Knox Gold Actually There?

Ultimately, what makes The New Case for Gold priceless is Rickards himself, who brings to the table a pile of degrees in everything from accounting to law and economics, coupled with a storyteller’s instinct for a good yarn, a dry sense of humor, and a wonderful ability to think outside the box.

For example, Rickards pooh-poohs one of the hard money community’s pet theories: that the US Federal Reserve, which has not been audited in decades, does not hold much of the gold that it actually claims to have in depositories such as Fort Knox.

Rickards claims that the Fed’s opaque gold leasing transactions are in fact nothing more than paper transactions. “The gold may be leased to others through the BIS,” says Rickard, “yet that does not mean US gold is not in US custody. If gold were as valuable as (some people) claim, why would the US government let the gold out of its sight?”