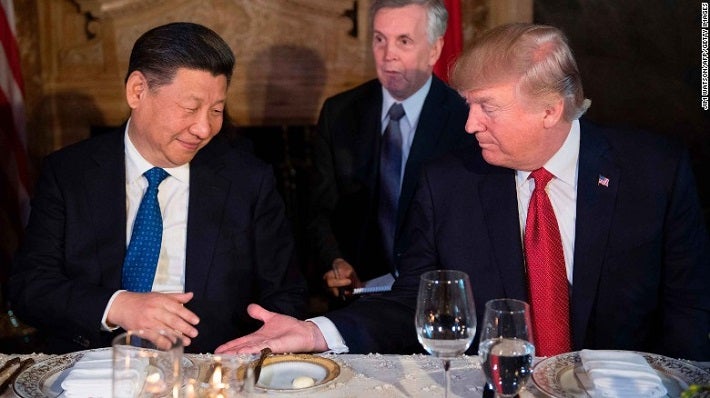 However, despite differing rhetoric, legal systems and capital control regimes, the two economies are increasingly alike.

Both are essentially state-run, with governments championing key sectors. Current talks, which are about regulating trade, not freeing it, provide a prime example. But there are others.

According to recent calculations by Truth in Accounting, public sector spending now equates to more than 60% of America’s gross domestic product. That’s higher than France. It’s even more than in socialist Scandinavian countries.

The public, including even many economic experts, don’t realize how lopsided the situation has become. That’s because the U.S. government increasingly hides or defers many of its taxes.

Few Americans will notice the tariffs that the Trump Administration recently decided to impose on $50 billion worth of Chinese imports. These will be included in the prices of those goods and thus invisible to consumers.

Many Americans would also be surprised to learn that the U.S. Treasury Department, through the nominally-independent Federal Reserve, manages consumer price levels.

These are signs the government wants to boost its control even further.

Janet Yellen, a former Fed chairman, recently floated a trial balloon suggesting that the central bank should be allowed to buy stocks on the open market. This could pave the way for the Fed to set prices for individual stocks, sectors, or the overall market.

The Federal Reserve’s monetary policies coupled with America’s fractional reserve banking system and currency monopoly could be keeping interest rates down by as much as 5 percentage points throughout the yield curve . If that is correct, the federal government is providing more than $700 billion in hidden subsidies each year* to businesses.

Governments in America pick all the major economic winners and losers. The Trump Administration’s recent tariffs to protect the steel industry are one example.

But there are others.

Key sectors, ranging from banking to auto manufacturers, were bailed out during the last financial crisis. The tech giants are essentially immune from anti-trust legislation, which is no longer enforced in any material way.

The American government’s growing share of the economy has had a corrosive effect on output, which has stagnated for more than a decade. When GDP totals are adjusted to take into account the debt increases needed to finance stimulus, the degeneration is deeper and dates back further.

To hide this fact, the American government appears to be emulating China by publishing fishy economic data.

U.S. efforts date back to the early 1980s, when statisticians began changing inflation, unemployment and GDP calculations. While reasons given by the experts (such as hedonic adjustments to CPI numbers) always sounded good, the fact that they generally also cast a better light on the data makes them increasingly questionable.

In the early 1990s, government accountants followed suit by refusing to record trillions of dollars worth of growing pension and medical care liabilities. Those practices continue to this day.

Americans continue to regard their economy as a free market system.

But when U.S. and Chinese trade negotiators meet, they, not the free market, will choose which industries succeed and which ones won’t.

Trump, whose policies include increased borrowing, spending and trade regulations, is less clear about his vision.

However, the U.S. has moved far from its capitalist origins.

Today, its economy is better described as “socialism with American characteristics.”

Check out these other articles by Peter Diekmeyer:

News
96
Investing in Precious Metals: A Guide for New Investors
By Sprott Money News
News
1117
Real Yields Are About to Dump, Gold Rallies
By David Brady
News
1733
The Convicted Criminals of JP Morgan
By Craig Hemke