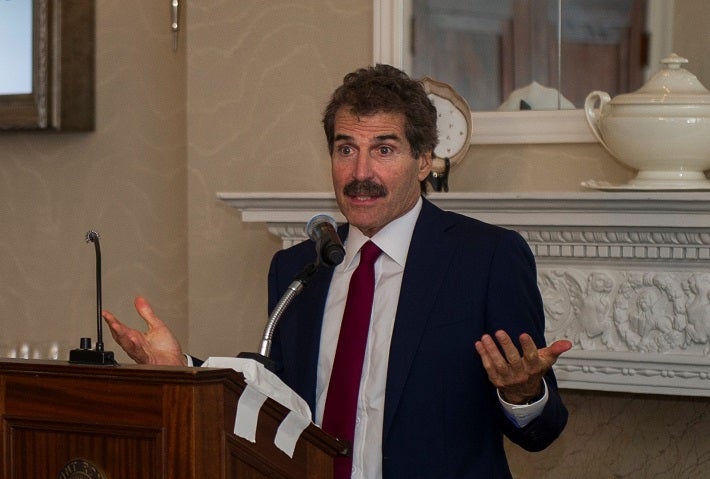 Criticism continues to mount in the wake of the Bank of Canada’s exclusion of free market economists and the two-tier media strategy it implemented for a key policy-making conference, held yesterday in Ottawa.

The conference’s goal was to air out preliminary issues related to the BOC’s inflation-control agreement with the Canadian government, which is renewed every five years.

Canada’s monetary policy politburo, which, through its interest rate policies, sets or influences prices throughout the economy, is currently reflecting on how much more it will ask ordinary Canadians to pay for their food, clothing and shelter during the coming years.

Stossel: the establishment protects itself

However, there were few ordinary Canadians to be seen at the BOC workshop, which was essentially paneled by bureaucrats, university professors and other government-financed officials.

“The establishment protects itself,” said John Stossel, a Fox News contributor, who was in town to address the Montreal Economics Institute about the perils of central planning. “People have become comfortable with the idea of a few old men setting public policy in a back room.”

The long-time investigative journalist, author and consumer activist, who has followed government closely for decades, was more nuanced regarding the Bank of Canada’s ban on alternative media.

“I can understand their reasoning,” said Stossel. “You can’t really have a rabble disturbing things.”

BOC to MSM: be nice or we will kick you out

Stossel was more concerned about the message the BOC ban sends to mainstream media, such as the Wall Street Journal and Bloomberg News, who were given preferential access to the policy event.

“That’s a club that all governments have,” said Stossel, who recently began contributing to Reason TV, a US-based free markets web-cast. “It’s “be nice or we will kick you out.” The White House does that too.”

Tim Moen, leader of the Libertarian Party of Canada, also broke his silence on the issue by issuing a strong condemnation.

“The Bank of Canada is suffering from a real lack of free market input,” Moen wrote on a party-affiliated social media page. “It's probably naive to imagine an institution charged with centrally planned money creation would want input from critics.”

A perfect time to look “outside the box”

Surprisingly, one of the most obvious free market voices that the Bank of Canada ignored during its consultation process came to the central bank’s defence.

“The reality is that most top monetary policy experts already work at central banks or at university research departments that accept their ideas,” said David Howden, academic vice-president at the Mises Institute of Canada, and author of numerous papers dealing with monetary policy from a free markets perspective.

“The bad news is that central banks are forced to refer to the same specialists over and over again,” said Howden, who is currently working on a paper dealing with central bank balance sheet analysis. “The fact that the current process is a multi-year reflection makes it especially important that they consult outside opinions and not rely on the presumption that the current framework is OK.”

Howden cited George Bragues, a professor at the University of Guelph-Humber, as one example of an “outside the box” thinker who the BOC might have consulted.

A return to a gold standard?

Ironically, Stossel, who admits to not being a monetary expert nor an expert on Canada, has offered interesting advice on the subject in the past.

“(Americans) should learn from Canada,” he wrote back in 2013. “The Canadians had no central bank when the Great Depression began, just private banks issuing currency backed by gold. During the 1930s, not even one Canadian bank failed. Thousands failed in the U.S.”

Stossel, who during his many years at ABC was regarded as one of America’s top reporters, may be right. But a cursory glance suggests that they don’t make Canadians like they used to.

They don’t make economists the way they used to either.