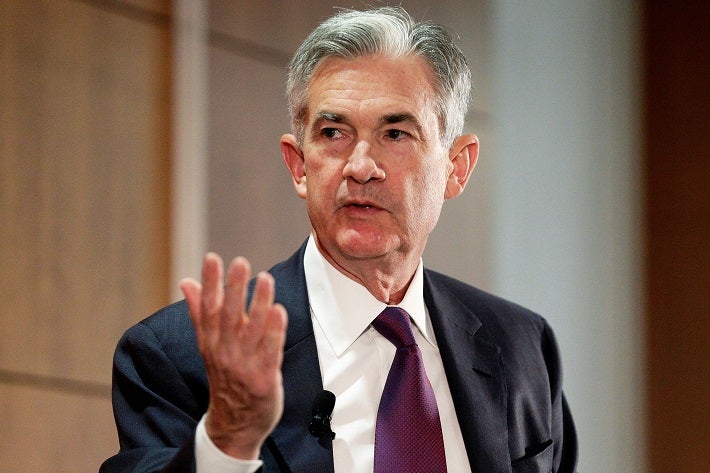 Jerome Powell’s support for the Federal Reserve’s low interest rate regime has long benefited investors, who reacted favorably to news that he would be Donald Trump’s nominee as its new chair.

Economists argue that those “unconventional monetary policies” helped the US economy avert a major depression following the 2008 financial crisis and have kept it afloat since then.

However, we couldn’t however find a single estimate of the costs of those policies.

That should come as no surprise. Free market economists have been essentially banned from academia, governments and the banking system, all of whom have a direct interest in masking the costs of public sector involvement in the economy.

So we did a “back of the envelope” calculation on our own, which suggests that ongoing Fed market manipulations equate to a $2.4 trillion annual wealth distribution from savers to borrowers.

The rest of this article is technical, and relates to the calculation of these distortions, which we refer to as the “Fed Tax”, and which the new Fed governor may, or may not address during his mandate.

However, the key takeaway for most readers is that this wealth redistribution (12.9% of GDP, almost as much as the $2.6 trillion Americans will pay in personal income taxes this year) is significantly hiding the scale of the US government’s involvement in the economy.

This in turn is making it impossible for policy-makers, researchers and voters to measure the costs and benefits of these wealth transfers.

First a word of caution. These calculations were made on the back of an envelope, in a Montreal basement, by a non-economist.

As such, although we believe $2.4 trillion to be a useful working estimate of the Fed-managed annual wealth transfer from US savers to borrowers, considerable refinement and nuance is needed to come up with a more precise result.

Readers who have better ideas regarding methodology are invited to contact the writer or to comment below.

To determine the scale of Federal Reserve’s hidden manipulations we start by estimating what interest rates would be in a free market* and then we subtract the level they are at are right now.

We then multiply the difference (which equates to how much interest rates are being suppressed) by all outstanding debt in the US economy. **

As we noted in a recent article, history suggests that the Fed’s and US government’s current interventions, could be depressing interest rates by at least 5.0 percentage points across the yield curve.

To get an idea of where interests rates would be in a free market environment (with a currency backed by gold and little inflation, credit risk or taxes on the interest), we cite the example of British consuls. As Richard Sylla and Sydney Homer note in their magisterial work A History of Interest Rates , consuls were perpetual bonds that yielded between 2.5% and 3%*** during much of the 100+ years that the British Empire was at its peak.

To give an idea of what 30-year US Treasuries (which have similar long-duration characteristics as British Consuls) would trade for in a free market, you’d start with the level their current yields are at (approximately 3%)**** in today’s managed economy.

You would add an inflation compensation premium (say 2%+, which investors would surely demand if there was no Fed money printing to buy up excess debt), a risk premium to account for the US government economy’s current record debt levels (of at least 1%) and compensation because interest payments are currently taxable (at a marginal rate of say 2% percentage points, or 25%), which they were not during the time of the British Consuls.

So, a theoretical minimum US Treasury yield in a free market environment under rough current economic conditions would be 3% + 2% + 1% + 2% = 8%.

This suggests that Fed manipulations are currently depressing yields on US 30-year Treasuries by 5 percentage points (8% - 3%) throughout the yield curve.

If we apply that rate to all $47.9 trillion in US non-financial debt, as per the Fed’s second quarter Z.1 Flow of Funds report, that suggests that government manipulations are transferring $2.4 trillion each year from savers to borrowers.

* Estimation of a free market rate of interest (which would vary depending in part on how much inflation, credit risk and taxation there is in the system) implies a free US currency market. This would put constraints on the Fed’s ability to tax savers by printing money, because if they did so, savers would abandon the dollar and instead opt for alternate, sounder currencies.

** We assume that the interest rate distortions will occur throughout the yield curve.

*** We use gross, rounded approximations in this estimate, to make the calculation easier for the laymen to grasp.

**** We are rounding here. Actual rates on the day of this was written were 2.8%, the approximate mid-point of the rough 2.5% -3%, range of the British consuls during minimal inflation and sovereign risk periods.

Ken Groeppe
Reply
It is impossible to calculate the current debt without knowing how much gold is in the treasury, and the government has steadfastly refused to permit an audit, which suggests to me that there is none. It was probably all gone by 1971. We know that many foreign governments are aggressively buying gold, so where will that put us, when the inevitable happens? The ensuing chaos is difficult to imagine, and whatever I read now doesn't help, because nobody really knows how this situation will play out. People are totally unprepared, because they have been led to believe that everything is hunky-dorry, and that their current life will continue as is into the far future. Meanwhile, government and academia will continue to beat the "barbarous relic" drum until the end. My research suggests that there is not enough gold in the world to stage any kind of recovery, and the same is true of silver. So what do we do? A similar thing happened to Rome during the 5th century, and probably to Egypt around 1200 B.C. Those cities were almost completely depopulated, but considering our gross overpopulation now, where can the vast urban populations flee to? So many of those people are either directly or indirectly dependent upon government support, and when that support is gone, they will have to do something. I suggest that they will have to return to subsistence employment, such as existed more than a thousand years ago in Western Europe. This happened in China about a millennium ago. China had been the world leader in science and technology until a Mongol emperor decreed that there would be no more research in these areas. The economy collapsed and did not begin to revive until after the death of Chairman Mao. Before that Greco-Roman culture had made significant scientific advances until the advent of Christianity brought it to an end. Only recently has it been discovered that the Greeks had invented the computer two thousand years ago, and we can see the results in two television specials and articles in Archaeology and Scientific American. The requirements for a viable civilization are (1) an honest economy, (2) an honest government, (3) an active scientific and technological environment, and (4) active arts creation and support by the general public. All of these are essential to a vibrant civilization.
Reply
Leave a Comment