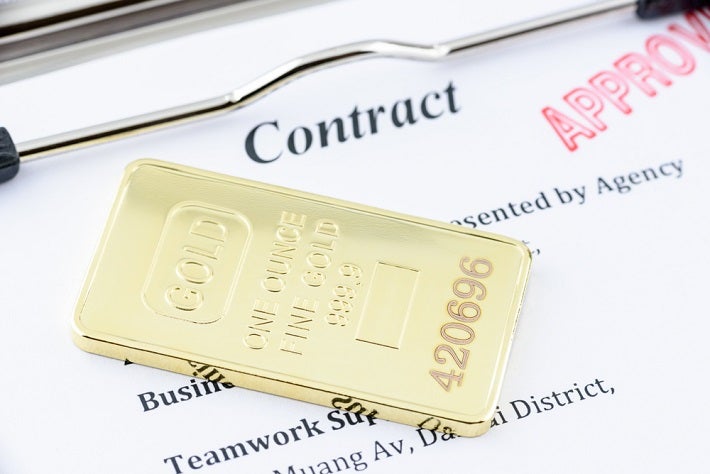 On one side, we have The Specs. These" investors" seek an exposure to gold through ownership of the paper derivative offered by The Comex. On the other side, we have The Banks. These " criminals" fraudulently create unlimited amounts of unbacked paper gold and sell them to The Specs in an attempt to cap price and, ultimately, profit by covering at lower prices. Which side will win? With open interest near record levels in both gold and silver, we're likely not going to have to wait much longer to find out.

If you somehow managed to sleep through yesterday, here's a recap. It was typical of the new, post-April 19 norm. Prices rose on the Sunday evening Globex. They rose further in Asia and they even extended through the London session. However, after hitting highs above $1290 in early Comex trading, prices were slammed for $15 in 15 minutes in a move that left many "analysts" searching for explanations: http://www.cityam.com/241192/analysts-puzzled-as-gold-and-silver-prices-suddenly-drop-during-us-morning-trading-

Perhaps your sweet, loving and harmless local analyst can help these "puzzled" folks out a bit?

The action on The Comex yesterday was simply another act of desperation on the part of The Banks. The issued and dumped an inordinate amount of paper gold, calculated by ZeroHedge to be in excess of $2.3B notional: http://www.zerohedge.com/news/2016-05-16/gold-silver-are-being-dumped

Were these Banks suddenly in a rush to sell an accumulated long position? Was immediate liquidation so important that an entire position needed to be blown out in minutes? Or we're The Banks simply dumping a whole bundle of new paper contract supply onto the "market"? In doing so, The Banks would clearly be attempting to manipulate prices lower, either to simply cap the days gains or to protect against the incredible losses that would be incurred if/when price surges through $1300. Recall that as of the most recent Bank Participation Report, The Banks were NET short nearly 200,000 Comex contracts. This means that every $10 move in price equates to a $200M paper loss. Accordingly, a gold price that surges from $1300 to $1400 would force another $2B+ in losses upon The Banks. Do you think they'd like to avoid this fate?

Thus we have days like yesterday. And how do we know this to be true? The answers can be found in the CME's own open interest numbers which are updated daily. If yesterday's massive contract dump had emanated from a Spec long, Comex history and paper market dynamics would have suggested a significant decrease in total open interest. The Specs would have sold longs. The Banks would have taken the other side of the trade and bought to cover shorts. Open interest would have been retired and the total number of contracts outstanding would have declined. On the flip side, if the massive dump emanated from a Bank issuing a whole bundle of new paper shorts, we would expect to see a significant increase in total open interest.

Well, the open interest numbers for yesterday are out and what do we have??? An increase of 16,767 contracts to a new, multi-year high of 596,513 paper contracts.

So now that we know just which parties were responsible for the raid and selling yesterday, it's time to once again discuss WHY The Banks operate this way. Aside from their BIS and Central Bank mandate to manage price, The Banks manage and manipulate the precious metals because they profit from it! Having the unlimited ability to create an endless supply of anything gives you direct control over whatever market you "make". And, for the past three years, this has provided a stream of easy profits for these Bank trading desks. They would simply issue as many new contracts as necessary to wait out The Specs. Eventually, price would top out and momentum would stall. All it would take was usually one good shove from The Banks and down would go price. The Specs would all rush for the exits and The Banks would use the ensuing selling to buy back and cover nearly all of their recently issued shorts.

The most recent and egregious example of this was last October and we documented the entire process as it unfolded, hopefully saving all of you some fiat and undue anxiety in the process. Here are two charts from the archives that effectively describe the process. These are dated 11/18/15 and labeled in such a way as to make it all quite clear:

The Banks are attempting the same maneuver now, writ large. Writ very, very large! Check the chart below and notice the same style of open interest flooding and price capping, only on a much larger scale and with much higher stakes:

Let's have some fun with math. Shall we?

If The Comex Banks had just been forced to maintain the already-fraudulent 5.81:1 ratio of paper to vault stocks from January 28, then total open interest allowed as of yesterday would only have been 441,309 contracts. And if total open interest was 155,000 contracts LESS than what it currently is, do you suppose that price would be a bit higher than $1272?

So, what's the point of all this? Once again, we're simply attempting to draw attention to the hopelessly corrupt and fraudulent, paper derivative pricing scheme. In the absence of any meaningful physical delivery, the "price" discovered on the Comex is not a price for gold (or silver) at all. Instead, the only price being discovered is the price of the derivative, itself. Nothing more.

However, there is a secondary point worth noting. Go back up and check that chart from November 18. Note the size of the "Commercial" NET short positions. Back then, the Gold Commercials saw their NET position reach 166,000 contracts and the 24 Banks included in the Bank Participation Report saw their NET position reach to 99,119 contracts short. As of last week, the Gold Commercial NET short position hit 285,000 contracts and this month's BPR revealed a 24 Bank NET short position of 195,262 contracts. Are The Banks beginning to get squeezed? Is there a limit to the amount of unbacked, naked short positions that they are willing to create and maintain. Is it possible that they are blindly putting good money after bad in a desperate attempt to save their accumulated positions? Could The Banks actually lose and be forced to cover, all the while sustaining massive losses? These are good questions. Perhaps we should consult "The London Whale" for answers: http://www.wsj.com/articles/london-whale-breaks-silence-1456189964

At the end of the day, be patient, yet remain firm. Recognize the forces aligned against you, however, and know that they are conspiring against you. Will they lose control? Only time will tell.

In the meantime, simply remain alert and prepare accordingly for all possible outcomes.

Charles Burkitt
Reply
With gold below 1220, how much have the banks made on that short from 1290? I'm a gold bull, but I never made a trade like that!
Reply
Leave a Comment