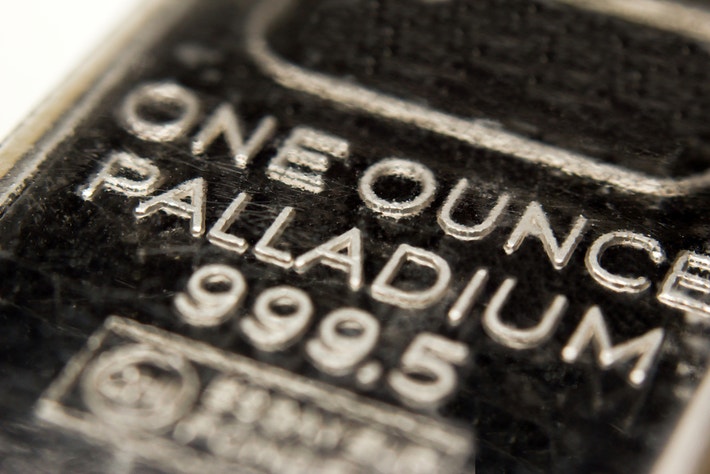 We've been monitoring and writing about palladium since the price first broke to new all-time highs in 2018. With the chart now seeming to go parabolic—and with misunderstanding and misinformation also at all-time highs—it seemed a great time to post this update.

Let's start by going back to the beginning. Here are links to four palladium-focused posts written in 2019. If you only read one, make sure it's the second one, titled "The Magic Palladium Bullet".

Why post all those links? Just to demonstrate that I know a little bit about this stuff. As opposed to the army of "analysts" on Twitter, I didn't just stumble onto the monthly chart last week and now feel compelled to author an opinion. Additionally, most of this new analysis and opinion misses the most important point: The situation in palladium is unique, and it holds the possibility of exposing...and even threatening...the entire LBMA/COMEX fractional reserve and digital derivative pricing scheme.

Understand that palladium, just like gold and silver, is overseen by the bullion banks, which are responsible for physical delivery in London. There are OTC forwards, leases, and unallocated accounts. There are also futures that trade in New York. Through these processes, The Banks manage a fractional reserve system of just in time physical delivery. As gold and silver investors, we await the day when a "run" on these bullion banks exposes the lack of physical metal behind this system. The current price action in palladium suggests the possibility that this "run" may have already begun.

First, it is very important to note that this move in palladium is NOT being "driven by speculators" who are "rushing to profit" and "blowing a bubble". Below is the most recent Commitment of Traders report for COMEX palladium. Note the total contract open interest and then note the NET positioning of the Commercials and the Large Speculators:

Now compare the information above to the CoT report data shown below from late 2018, when price was first challenging the previous all-time highs made in 2001. Do you see any significant changes over the past fifteen months, even though price has more than doubled?

Thus, I think we can state that what we're seeing in palladium is NOT a speculator driven and COMEX based paper frenzy. And if the paper/digital COMEX market isn't the driver of price, then what is? Let's check London, and when we do, we'll find our answer.

First see this screenshot taken from that "Magic Bullet" post of February 2019.

In any physical metal supply squeeze, you will always hear two warning alarms:

Those two conditions were noted in February of last year, and now in January of 2020, the situation has dramatically worsened (for The Banks). First, let's check the current London lease rates. We noted rates as high as 20% a year ago. This was considered outrageous at the time. And now, precious metals expert David Jensen reports that the one month lease rate for physical palladium in London exceeded 36% on Monday, January 20.

And now you're likely asking yourself what the heck this means. In simplest terms: if I'm a Bank like JPMorgan and I'm on the hook to physically deliver today 1,000 ounces of palladium that I don't currently have, I have to borrow (lease) it from some other Bank. As of today, that other Bank is going to charge me a 36% annualized rate, and it's not payable in cash. Instead the "interest" is payable only in additional physical metal.

So, I borrow that 1,000 ounces to settle the trade today. However, I now have to come up with 1,030 ounces to pay you back next month! (36% for a year is roughly 3% per month.) Well, hell's bells! If I can't get 1,000 ounces today, where am I supposed to come up with 1,030 ounces a month from now?? Thus these extreme lease rates are clearly indicative of a physical supply squeeze and it's a squeeze that's almost guaranteed to get continually worse if a new stash of readily available palladium doesn't suddenly appear.

(Oh, and by the way, how did the Bank in our example get in this physical jam in the first place? Because, as noted above, the LBMA/COMEX palladium market is structured almost identically to the LBMA/COMEX gold and silver markets. The bullion banks are massively over-levered after years of derivative and lease shenanigans!)

So now that you understand that it is NOT auto industry physical demand and it is NOT speculator paper demand that is driving price, does the chart below look a bit more intriguing? Sure, it looks parabolic, and yes, it appears unsustainable. A serious and sharp pullback may appear at any time. However, given what you now know about the actual factors that have been driving price for nearly two years, does this not also look like a chart that is attempting to tell you something?

And what might that chart be telling you? That the LBMA/COMEX pricing scheme for palladium may be on the verge of collapse. And if the pricing scheme for palladium collapses, how long might it be before gold and silver investors worldwide—of whom 99% trust The Banks to hold their unallocated accounts and custody their metal—begin to doubt the ability of The Banks to fulfill their promises of delivery?

john martin
Reply
Craig, the Fed has little or no interest in palladium. That is the crucial difference. The Fed has an unlimited amount of money with which to create phony paper gold and silver. It will back-stop all of its bullion bank proxies to prevent them from failing. If the Fed has to shut down COMEX long gold/silver ala Hunt brothers, it will. Liquidation only. You can sell but you cannot go long until Fed says so. Once prices are crushed back to where Fed thinks they should be, normal paper trading will resume. If some smartalek traders try to go long again, it will be wash, rinse, repeat until Fed completely kills gold and silver market. It cares not! Fed only cares about saving their Frankenstein dollar creation and will do anything to preserve the illusion of the mighty dollar. Sorry to be so cynical and pessimistic but I have been watching this charade since 2011 and cannot see why Fed would relinquish control of gold and silver price setting mechanism that is the COMEX.
(1)
Reply

Edwin Tofield
Reply
In a tweet I read that the leverage in palladium trading is much higher than in gold and silver. Although I agree that what is happening with palladium, might be an indicator for gold and silver, this could take much longer.
Reply

SurMiv
Reply
With the price inelasticity of supply the price of Pa should sooner or later end up at levels when substitution in the major end use (auto) starts. As for this subject I was unable to find an qualified reasoning, I build my investment policy with a very simple logic: 1) Pa and Pl surfaces as catalysts are of more or less similar power while Pa atomic weight is 1/2 of Pl. It means that market needs higher than current ratio of prices per ounce (2+) to start substitution. 2) Rh is appx. 5 times more effective catalyst than Pa and 10 times more limited in supply. As a result - Rh current price of USD 10 000 per ounce clearly shows that it is attached to a level of substitution with Pa and this means that Pa price should repeat a fate of attaching the level of substitution with alternatives, which is generally unknown by the market. Increased volatility of the last week is (to my mind) a confirmation that Pa price is in the middle of such transition.
Reply
Leave a Comment