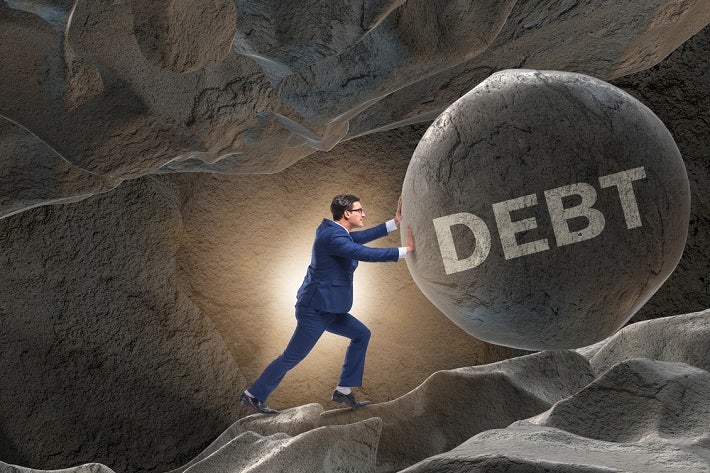 Just as gravity propels the lava from Kilauea inexorably toward the sea, a mountain of public and private debt looms over today's markets.

Earlier this week, the Boards of Trustees for both U.S. Social Security and Medicare released their latest updates on the "solvency" of the programs. The advisories can be read here: https://www.ssa.gov/oact/TRSUM/index.html

Though it's common knowledge that these programs are vastly underfunded, the degree to which the pending crisis is accelerating should come as a shock to all Americans.

In their report, the Trustees state that the "Social Security Trust Fund" will be exhausted in 2034. Though this retirement income program is already running on fumes due to simple demographics— and the notion of a "trust fund" is really nothing more than an accounting trick —

The report that it will be insolvent in just fifteen years should come as a cold slap to the face for anyone still clinging to the belief that the funding problems plaguing this income redistribution program can be put off indefinitely. From the report:

“Social Security’s total cost is projected to exceed its total income (including interest) in 2018 for the first time since 1982, and to remain higher throughout the projection period. Social Security ’s cost will be financed with a combination of non-interest income, interest income, and net redemptions of trust fund asset reserves from the General Fund of the Treasury until 2034 when the OASDI reserves will be depleted.”

Even worse was the report from the Trustees of the Medicare program. Sharply rising healthcare costs and the increase in program participation due to aging Baby Boomers led the Trustees to project insolvency as soon as 2026. That's just eight years from now! Also from the report:

“The Trustees project that the Hospital Insurance Trust Fund will be depleted in 2026, three years earlier than projected in last year ’s report. At that time dedicated revenues will be sufficient to pay 91 percent of hospital insurance costs. The Trustees project that the share of hospital insurance cost that can be financed with Hospital Insurance Trust Fund dedicated revenues will decline slowly to 78 percent in 2039.”

While higher tax rates and means tests may serve to push out the insolvency dates, there remains very little political expediency to enact these changes. Thus, as these critical U.S. government entitlement programs begin to falter, the only agreed-to solution from both sides will be debt monetization and currency creation from the Federal Reserve. Borrowing costs will soar, and the devaluation of the dollar will be significant. Markets will be traumatized, and threats to the hegemony of the U.S. dollar as global reserve currency will move to the forefront.

Again, this debt avalanche is coming just as assuredly as lava flows downhill.

What can you do about it? Well, you have two choices:

1. Party like it's 1999. Go on about your business as if nothing is the matter and assume that every tomorrow will be just like yesterday. When the day of reckoning arrives, just hope that you can get out of town before the evacuation routes become blocked and impassable.

And one of the essential steps of preparation is to buy physical gold and silver. Both metals are known as "sound money" and have been recognized as such for millennia. They serve as protection against currency devaluation, and you can see this in action today when you review the recent changes to the price of gold in Turkish lira or Brazilian real. Both Turkey and Brazil are dealing with monetary uncertainty brought about by political and economic unrest. As the value of both Turkish lira and Brazilian real have collapsed, the price of gold in those currencies has soared, which once again proves the value of gold as a protector of wealth. See below:

Of course, the price of gold in U.S. dollars has underperformed and underwhelmed for the past five years. However, it's only a matter of time before the dollar price of gold resumes its upward march in a trajectory that mirrors the exponential growth of total U.S. government debt. See the chart below showing this relationship since the turn of the century.

So, again, the choice is simple. You can turn a blind eye to economic Mother Nature and the principles of Newton, OR use your time wisely to prepare today for a calamitous tomorrow. One of the easiest and simplest steps you can take is the gradual addition of physical precious metal to your portfolio.

Begin your preparations today before the growing mountain of debt "lava" inundates and overwhelms you.

Deter Naturalist
Reply
I must disagree with your premise. The existence of a mountain of unpayable IOU's is a synthetic SHORT of the dollar. As the mass-psychological optimism and (pathological) trust that supported the buildup of historically unprecedented DEBT inevitably wanes, the mental contribution to what I call M5, the broadest category of "money" (which includes the accumulated value of everything people think of today as "money in the bank" like bonds and stocks) will collapse like never before in history, too. This means that remaining claims on dollars should skyrocket in purchasing power, just as occurred in 1930-32 only far more. The Great Asset Mania of the last 50 years is nothing but the Mother of All Credit Bubbles, and while banknote inflation is sticky, credit inflation is a state of (mass) mind and can evaporate. The asset mania of 1920-29 is an anthill to the last 36 years. The ensuing busts (and deflationary events) should be of similar comparison.
(1)
Reply

Bill Smith
Reply
That was true for 1930-32, when the dollar was tied to gold, and holders of dollars could convert to gold at will. Now that 'dollars' are tied to nothing, there is nothing to keep them from printing them into oblivion, and they will....just as they have done since 1971.
(1)
Reply

Deter Naturalist
Reply
The gold standard did presumably provide a limit to how much inflation could be "believed," and its elimination (and silver's in 1964) destroyed that consistent yardstick, but I must disagree with your "printing" allusion. If we agree that inflation, properly defined, is a rise in monetary units (banknotes, credit and--I aver--much, much more) in relation to available goods and services, then very little of inflation is banknote printing. The real inflationary process is (1) bank credit creation, (2) non-bank credit creation, and (3) accumulated asset price inflation. If we accept that people (including accountants) call marketable securities "cash" when producing a balance sheet, then 100 shares of IBM are "cash" (i.e., money-in-the-bank once-removed) and if (for example) there are a billion shares of IBM worth $100 each, and a single seller and single buyer agree to exchange a SINGLE SHARE of IBM for $101, then there is a ONE BILLION DOLLAR increase in IBM's market cap, but (let's assume the seller and buyer both use the same bank) there is literally ZERO net change in bank deposits, no? But if we already agreed that shares of IBM are considered "cash" on a balance sheet, then didn't we just witness a $Billion in monetary inflation? What is the rise of the Wilshire 5000 these past 9 years but 400% inflation of the contribution of asset prices to monetary aggregates? Where this gets interesting is that banknotes have a physical existence, once printed. When Zimbabwe prints a Million Dollar banknote, it is a sticky contribution to the available monetary units chasing goods and services, but when money growth occurs due to credit available (from banks or other finance firms) or due to a rise in the total amount of Stocks and Bonds (AKA IOU-money), then the increase in the broad money supply is nothing more than a product of MASS PSYCHOLOGY. I suggest to you that we've experienced the largest credit-and-asset-price inflation in human history, and it occurred for no more reason than a populace besotted with self-satisfied optimism and pathological trust. An end to this absurdity is long overdue, and when the herd changes direction and embraces distrust and fear, the total quantity of "moneyness" (banknotes + credit + cumulative asset value) will collapse beyond anyone's wildest imagination. Of the items contributing to "moneyness," only one of them has physical form. The other two are just mental constructs, and what came from nowhere can (and should) return to there. It should be a short squeeze on banknotes and other trustworthy claims on dollars, and if this is the path taken, not one in a million will see it coming.
Reply
Leave a Comment