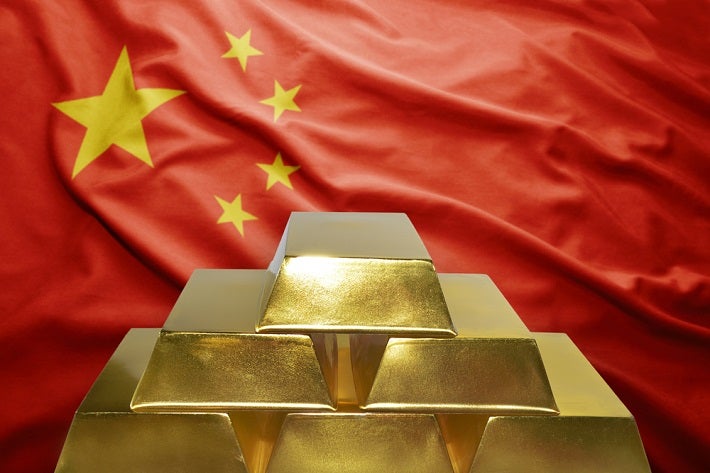 The Commitment of Traders reports for COMEX gold and silver are back to levels that often precede price bottoms. Could they also be telling us something about the current yuan-gold correlation?

As background for this article, please be sure to review these two posts from last month: Has the PBOC taken control of the Gold Market & Potential Impacts of Yuan-Gold Peg where we first laid out the details of the current yuan-gold correlation and then projected what it might foreshadow.

Our working theory is that China—knowing that a massive devaluation of the yuan versus the dollar is possible/pending due to the expanding U.S. tariffs—is actively attempting to lower the dollar price of many commodities, including gold. Simply put, if the dollar price of these goods can be dropped by roughly the same percentage as the yuan devaluation, the relative cost of the goods in yuan remains unchanged.

Here are the last two months of CNYUSD and COMEX gold plotted together:

But again, it's not just gold. Here's the CNYUSD with COMEX copper:

Here it is with COMEX platinum:

And here it is with COMEX zinc:

As you can see above, however, the most pronounced correlation is in COMEX gold. The question becomes: Is this a deliberate program by the PBOC to act through their global accounts to influence the futures markets OR is this just a bunch of items, trading in tandem and simply reacting to the same stimuli of pending tariffs?

And this leads us to the most recent Commitment of Traders report for COMEX gold. On the report released last Friday, July 27, (surveyed Tuesday, July 24), we saw four significant levels:

OK, on the surface, that's all pretty bullish, right? There appear to be record amounts of Spec short fuel for an epic squeeze. And most likely this is the case. All we need is a turnaround to start the short-covering extravaganza.

However, you should also consider this... One of the "solutions" that we've discussed for how the PBOC could drive the apparent yuan-gold link is massive shorting through offshore accounts. Sort of like how you see U.S. treasury buying and selling from places like the Cayman Islands when the TIC reports are reconciled (https://www.zerohedge.com/news/2016-06-15/what-behind-record-sale-75-billion-us-treasurys-foreign-holders). In this scenario, the Chinese could be using their own offshore funds to affect COMEX prices. If this were the case, these accounts would likely show up in the Large Spec category, as they almost certainly wouldn't be listed as Commercial.

Again, none of this can be proven. We are simply speculating. However, you'll recall that the yuan-gold peg really took over on June 15, two days after the FOMC. Gold had been steady and rising above $1300 and the CNYUSD was stable, too.

For perspective, let's look at the last couple of times COMEX Digital Gold has been smashed on a scale similar to the present:

So, does this prove that the Chinese are driving the yuan-gold link as we suspect? Of course not. However, the CoT data certainly provides some circumstantial evidence of how it might be taking place. Would 25,000-30,000 contracts of PBOC shorting be enough to establish and maintain the peg?

It seems the answer may be in how the data changes when price finally begins to recover. At that point, we'll have to diligently watch the yuan-gold correlation and the CoTs to see if they change in unison. Will price rally in a traditional short squeeze or will price only crawl higher while the massive shorts remain in place, despite what would be significant margin calls? Will price finally break free of the peg as shorts are squeezed and covered? These questions will be answered in the weeks ahead, but it's good to start considering them now as we try to determine where gold prices are headed in the second half of 2018.

Chris
Reply
I appreciate your qualified language, Craig. I wish more of the people who have noticed these correlations were as circumspect. A downward trend will correlate positively with any other downward trend, and negatively with any other rising trend. That means the only variables a declining trend will not correlate with are those that are neither declining or rising, ie, which are flat. The stronger the trend, the stronger the correlation tends to be, because there are fewer reversals in each series to muck up the correlation. If both trends go straight down, the correlation will be very strong (Pearson’s product moment correlation coefficient) or perfect (rank correlation, eg, Spearman’s).They all correlate because they are all going down, but is China causing the Argentinian Peso to decline, and the Turkish Lira, and most every other currency except the dollar, and is China also responsible for the strong negative correlation between the yuan and average daily temperatures in Spain, or the yuan and sales of sunglasses in Texas? I don’t know, but we should all acknowledge that the decline of the yuan will correlate negatively or positively with every trend except a flat one, and strongly with other strong trends. Perhaps the real danger lies in all these strong downward trends?
Reply
Leave a Comment

News
78
Precious Metals Prepare For Another Price Advance
By Chris Vermeulen
News
828
The Polls Were Horribly Wrong in 2016, Are They Wrong Again?
By Nathan McDonald
Weekly Wrap Up
4116
World Events “Building to a Crescendo” for Gold and Silver - Eric's Weekly W...
By Craig Hemke