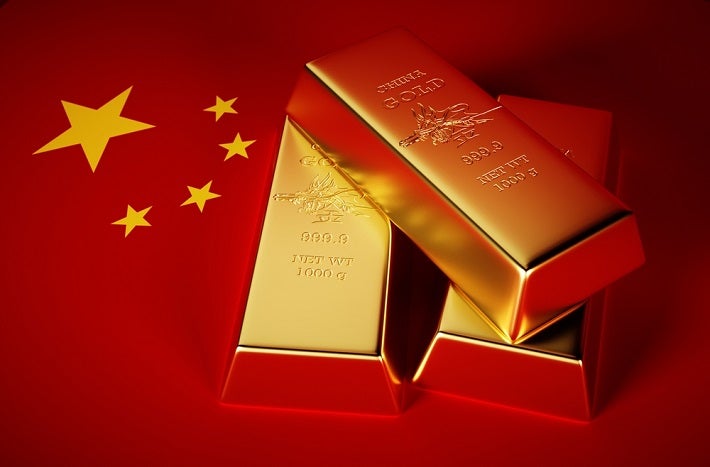 No, the excitement of the year-end and Q1 rally has not caused us to forget about this subject. So today, let's take a minute to revisit the "peg" and see if it still holds relevance.

Again, we wrote about this apparent yuan-gold "peg" repeatedly in the second half of 2018. Here are just a few examples:

Most of our articles and interviews on this subject came with the following conclusion:

While it appears that official PBOC forces have seized control of the COMEX price, it's also possible that the two items—COMEX gold and USDCNY—are simply moving in tandem as they react to the same stimuli.

So, with the passage of time and the flip to the new year, are we able to discern which is the right answer? Unfortunately, no. It could still be either one. Perhaps the PBOC and IMF have established a peg and they use COMEX futures and algos to enforce it. Perhaps it's just coincidence and that whole correlation-causation thing.

Check the chart below. Has gold priced in yuan broken out to the upside and broken any "peg" OR is gold simply moving up in dollar terms against the yuan at the fastest pace in three years? I honestly cannot give you a definitive answer at this point.

And as we check the current combined charts, it certainly looks like the correlation is continuing, though with COMEX gold moving ahead faster. This first chart dates back to November:

And this next chart covers the June-October period of last year, when the correlation really got tight.

So, anyway… At the end of the day, I'm not ready to say that this is a done deal and that the PBOC and/or IMF have "pegged" COMEX gold to anything at this time. I was leaning that way a few months ago, but the apparent "peg" was in its early stages and we needed more time to study it. Now, with the benefit of additional time and the expected turnaround in price and sentiment, the "peg" no longer appears as certain.

That DOES NOT mean that the yuan is irrelevant, though, and like the algo-driven USDJPY peg of 2014-2017, gold's relationship with the yuan can still be a daily factor in driving price, particularly when volume and interest are low. For example, look at the combined action over just the past few days. It looks pretty tight to me! However, I'm inclined to conclude that this is more of a "two things moving together" deal than an enforced "peg".

And if that's the case, then what is the primary driver of the ongoing rally in gold? The most glaring answer is technical positioning and the impact that this positioning has on the Spec algos, which drive demand for gold exposure on the COMEX.

On the chart below, note that COMEX gold saw a "Death Cross" of its 50-day and 200-day moving averages on June 19 of last year. The speculator liquidations that followed drove price from $1304 to a low of $1173 just two months later. As you can see below, the impact was most dramatic in the combined positions of the Large Speculator "Managed Money" category, where the liquidations and shorting totaled nearly 120,000 net contracts in less than four months!

But now the opposite is unfolding. Back on November 29, COMEX gold saw its first "Bullish Cross" of the 50-day back up and through the 100-day. Soon the 50-day will bullishly cross the 200-day as well. This is leading to speculator short-covering and long-buying, and the resulting move has thus far been nearly $80, or about 6%. See the amended chart below:

Though Commitment of Traders data has been suspended during the current U.S. government shutdown, the explosive growth of Bank-created COMEX open interest, combined with the information from the most recent report surveyed December 18, confirms that a speculator shift from net short to net long is ongoing.

(As an aside, you should be sure to make note of COMEX silver. The recent bullish cross of silver's 50-day through the 100-day will very likely lead to a similar rally, one that takes it all the way to $16.40 or so in the short term. See below.)

In conclusion, is the current rally in COMEX gold based upon strength in the yuan, or is it instead being driven by speculator flows that are led by technical factors? My inclination is to believe the latter, and as such, we should expect further price gains in the weeks ahead, as this initial rally of 2019 plays out.

Weekly Wrap Up
1798
Two Steps Forward, One Step Back - Weekly Wrap Up
By Craig Hemke
News
1225
Inflation is Everywhere
By David Brady
News
123
The Fed Further Reduces Its Transparency
By Dave Kranzler