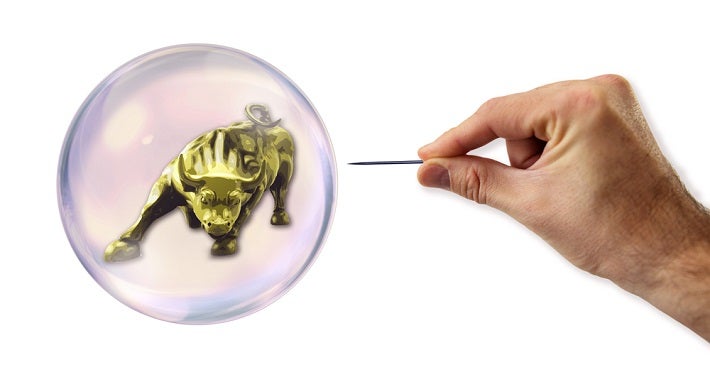 Tilray could well become the poster-child stock of the biggest stock bubble in U.S. History.

This past summer Tilray (TLRY) went public (July) at $17 per share. TLRY is a Canada-based medical marijuana company. While its operations are targeting the international medical marijuana market, the Company generated just $9.7 million in revenues in its Q2 2018. It produced a net loss of $12.8 million. The stock had run from $30 on August 20th toa close of $120 on September 17th. The stock jumped again the next day to $154 on newsthat the DEA granted the approval for Tilray to provide THC capsules to UC San Diego for a clinical trial on the medicinal use of THC/CBD.

At the close of trading last Tuesday, TLRY’s market cap reached $14.1 billion, despite the fact the the UC San Diego deal would provide little in the way of revenues. Wednesday the stock soared to as high as $300 – a $27.6 billion market cap. TLRY did $17 million in revenues for the first-half of 2018. Let’s double that for the next 6 months and give them credit for a forward 12-month revenue stream of $68 million, which is more than generous. That means at Wednesday’s peak, TRLY was trading at 405x forward revenues. But from Q2 2017 to Q2 2018, its operating loss nearly quintupled, from $2.3 million to $11 million. We don’t know to what extent, if ever, this business model will be profitable.

Tilray closed just below $100 on Monday. On Tuesday the stock jumped $17, adding $1.5 billion to its market cap on the “news” that the Company “successfully” delivered CBD capsules to 29 “critically ill children” at a hospital in Victoria, Australia. There was no mention of revenue or profit impact of this “event,” which means this “feat” will be an expense item. Funny thing about CBD products, they are egally available in high concentration capsules and tinctures to anyone. See Ambary Gardens, for instance.

Marijuana was approved for medical use in Colorado in 2008. It was approved for recreational use in 2012. From 2008 to present, the retail price for “top shelf” weed has gone from $350 per ounce to as low as $150 per ounce. Once marijuana is legalized in a jurisdiction, the barrier to entry for producers and distributors is low. This means that, overtime, the selling price of marijuana will begin to approach the cost of production plus the cost of distribution plus a small profit incentive for growers and distributors. I have to believe the big tobacco companies are waiting impatiently for the Federal Government to legalize marijuana out of desperation to generate tax revenues. Then it’s game-over for existing growers.

TLRY’s operating loss including non-cash stock compensation was $14.7 million in the first half of 2018. Net of the huge jump in accounts payable, TLRY’s operations burned $11 million in cash in the first 6 months of 2018. TLRY insiders are sitting on 83 million of the 92 million shares outstanding. I’ll be curious to see how quickly insiders begin to register their shares and unload them. It’s only a matter of time before ground-floor investors try to quietly unload shares. They are idiots if they don’t.

The point here is that, while the run-up in stocks like Tesla and Netflix has been absurd, the trading action is Tilray has been absolutely insane. As it turns out, with only 17.8 million shares in the public float, TLRY has been engulfed by a vicious short-squeeze made even worse by momentum-chasing hedge fund algos and day-traders. Buyers blindly chasing the price higher, driven by fearless greed and the expectation that they will be able to unload their stock purchase on the next buyer willing to pay even more for the stock in complete disregard to valuation considerations.

This is very similar to the early 2000 dot.com/tech stock bubble. Tilray’s price rise to $300 is similar to rise in Commerce One. I was short CMRC at $200/share, which at the time was a completely irrational valuation. CMRC then ran quickly up to $600. But $600 was the top and it fell off a cliff from there.