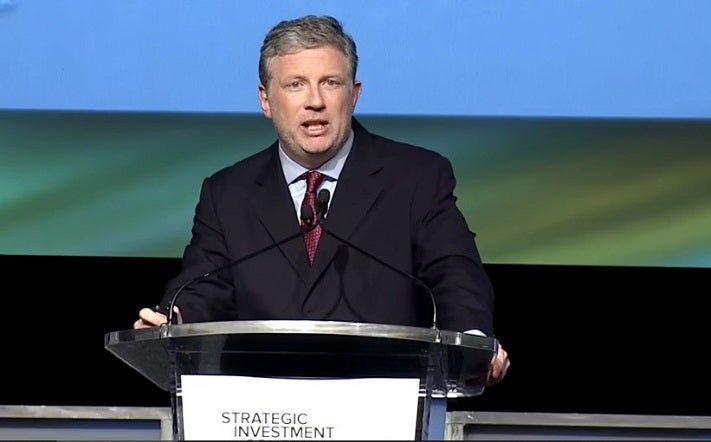 Ten years ago, CNBC viewers were glued to their sets as the global financial crisis unfolded before their very eyes.

America’s top political, financial and economic experts appeared on the network to comment on the fast-moving events. Some suggested that stocks were overvalued. None warned investors to sell.

Viewers who trusted Jim Cramer, Larry Kudlow, Steve Liesman and other top CNBC commentators to provide proper context thus saw nearly half of their equity holdings (as measured by the S&P 500 index) wiped out.

This for the second time in ten years.

Today, with U.S. markets trading at near all-time highs, CNBC, Fox Business, Bloomberg and other mainstream media appear set to repeat past mistakes.

Secular bears, such as Harry Dent, Peter Schiff and Marc Faber are essentially banned from those networks or given only token airtime.

Grant Williams, co-founder of Real Vision, an upstart alternative financial network, wants to change all that.

“Most financial advisors are bullish by definition,” says Williams, an industry veteran. “That means investors who want a complete picture need to consult a broader range of sources.”

Williams and another of the station’s co-founders Raoul Pal got the idea for Real Vision during a chat they had shortly after the previous financial crisis.

“We realized that wealthier and better-connected investors had a pretty good idea what might occur,” said Williams, whose A World of Pure Imagination topped our list of the best blogs of 2017. “Whether they did anything about it is another question. But ordinary folk were left high and dry. We wanted to change that.”

Real Vision has grown quietly and steadily from its earliest days, during which it built up a coveted, young, highly-savvy audience. Station officials say that 40% of viewers earn more than $200,000 per year and the same percentage have investments in excess of $500,000.

Many initial viewers were market bears hailing from the precious metals and hedge fund communities. However in recent months, hot on the heels of the completion of a new $10 million financing round, the station’s audience has broadened.

“Our focus has always been on attracting the smartest and most innovative thinkers,” says Williams. “With key benchmarks up nearly fourfold during the last ten years, it’s hardly surprising that many of the best analysts would be cautious.”

Real Viewers who invested the time got an in-depth overview of how America’s 1971 default on its gold debts (which few CNBC viewers have even heard about) may be setting the stage for a colossal reset.

“Major media are perpetual bulls because this draws advertisers,” jokes Williams. “Imagine running a mutual fund ad right after an analyst says the market is overvalued. That wouldn’t work well. But we don’t run ads. So we can offer a wider range of opinions.”

Fed employees not allowed to speak to the press

With Real Vision broadening its content, Williams has increasingly focused on digging deeper into the Federal Reserve and the shady world of central banking. The process has heightened his conviction about the role that physical gold needs to play in investor portfolios.

That said, it hasn’t been easy. As John Maynard Keynes noted, central banks go to huge lengths to hide their primary roles as government tax collectors.

Federal Reserve employees, for example, are forbidden from speaking to the press. To make sure that they don’t, the Fed only hires the most obsequious candidates, from universities whose graduates have a reputation for towing the line.

With the exception of Danielle DiMartino Booth, whose book Fed Up! appeared after the last financial crisis, the Fed—which some argue is running a colossal Ponzi scheme—has not had a major whistle blower in its 100+ year history.

The same applies to the big banks, which according to Keefe, Bruyette & Woods have paid nearly $250 billion in fines for fraudulent activities, without one of their key executives having “blown the whistle” to warn the public.

Who the heck is William White?

Williams, though not a journalist by training, has picked up a decent bag of tricks over the years.

For example, this week Real Vision ran a 90-minute interview with William White, an obscure former Bank of Canada, BIS and now an OECD official, who has been out of central banking for more than ten years.

CNBC journalists, who are only interested in sound bites, wouldn’t have given White two minutes of their time. Yet his importance cannot be overstated.

Williams knew that because White was no longer affiliated with the central banks (but remains connected with the key players), he was thus able to speak relatively candidly.

White’s warnings—that central banks’ steady incompetence has dug them into a huge hole, that they are likely all working for themselves (as opposed to colluding, as some suspect) and that global debts will not be paid back—thus need to be taken with utmost seriousness.

White also reminded Real Vision viewers that he had worked closely with Claudio Borio, the current head of the economics department at the BIS, and suggested that the two thought alike.

This provides a strong hint that Borio’s commentaries during the coming months will be “must-reads” for all who are monitoring the international financial system.

A broad range of sources

Critics argue that viewers of CNBC and other mainstream media have more than made up their losses since the dot.com and housing bubble crashes.

However, that only applies to investors who were wealthy enough to hold on throughout and after the crises. Ordinary and poorer investors weren’t able to risk their remaining assets. Many left the market, never to return.

A market crash today would be particularly catastrophic to baby boomers, many of whom are simply too old to be able to wait out another boom-bust cycle. Hence the importance of Williams’ reasoning.

With consumer, business and public sector debts and most major markets all near record levels, investors do need to consult a broad range of sources.

But those who only have time to follow just one financial network should probably ditch CNBC and get Real Vision.

Hans Maier
Reply
Very good article. I knew White, but was unaware of RealVision. In an interview with a Germany financial weekly (Focus Money), White said two years ago 'We need new rules of the game', i.e. a restructuring of the monetary system. Since then, things have not really got any better. Really worrying.
Reply
Leave a Comment