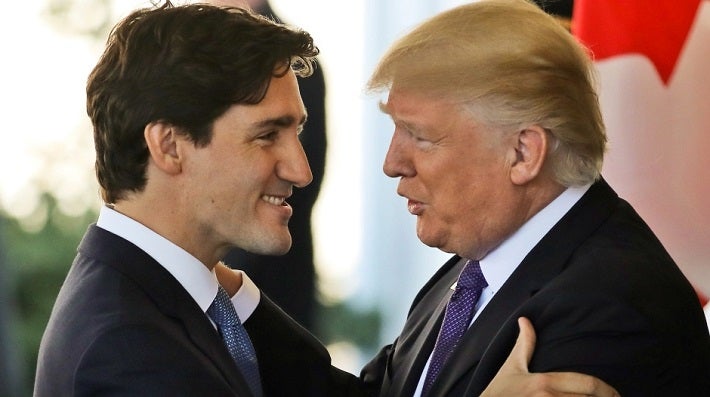 Trudeau’s blunt reply, delivered in last week’s Liberal budget, came in the form of vast cuts to Canada’s military spending. Just as important as the scale of the cuts was the timing, which came shortly after the US President had demanded an increase.

This sharp rebuttal has important implications for how a Trump Administration’s policies could play out on the world stage, the US economy, and yes, for gold.

America is widely criticized for its wars, occupations, and bombings. However, the country also plays a crucial role as a global cop, which on balance, does a lot more good than bad, particularly for rich Western economies.

American soldiers guard the world's sea lanes, keeping commerce safe. Its bases in more than 100 countries help keep a range of governments in power, which are favorable to US (and Canadian) interests.

But that costs a lot of money, and American taxpayers have been footing much of the bill. American military spending, as a percentage of GDP, is roughly triple that of what other NATO counties pay, possibly more.

(The precise total is hard to determine, because reported US defence outlays exclude items such as nuclear weapons, military pensions, supplemental allocations, and the like).

Trump has demanded that NATO allies, which have been freeloading on the back of US protection, ante up. His key demand is that they abide by a target set more than a decade ago: to spend 2% of their GDPs on defence.

More important, Trump threatened to withdraw protection for laggards by hinting that the United States might not feel bound to defend countries that didn't meet their 2% commitments.

There's method to Trump's madness. Lost in his bellicose rhetoric is the fact that if NATO members adhere to his demands, it would generate huge business for American defence contractors, who produce much of the world's best equipment.

Trump's request, in short, is for foreign help to bail out America's military industrial complex.

Like Gerald Ford before him, Justin Trudeau never actually voiced the words "Drop Dead." In fact Trudeau's recent meeting with the US president was characterized by smiles, much-publicized handshakes, and a co-announcement with a swooning Ivanka Trump of a new initiative to advance women's rights.

Then Trudeau got on a plane, went home, and did exactly the opposite of what Trump demanded. Worse, the $8.4 billion in "re-profilings" that Trudeau's government announced amount to the largest defence cuts in recent history.

Canada has no enemies to defend against, Trudeau is betting. Even if it did, with time and winter as our allies, Canada could defeat any invading force, the thinking goes.

Implications for gold and the economy

Trudeau's slap in the face of a nascent Trump Administration has huge implications for its agenda going forward. The most obvious of these relates to Trump's "America First," trade policies.

As previously highlighted (see Smoot-Hawley, Donald Trump's economic mentors), the idea that the United States can set up trade barriers without encountering serious retaliation is a pipe dream.

Unless Trump changes his bullying tactics, he is similarly unlikely to get his way with Congress. Like Trudeau, US Senators (both Republicans and Democrats) will simply smile at his tax cut, health care, and deregulation proposals, play along, and then filibuster to ensure they never make it to the floor.

There's even a takeaway for investors worried that Trump, who is facing the same liquidity trap that Franklin Delano Roosevelt faced during the 1930s, might similarly respond by seizing Americans' gold.

Because a Trudeau government that ignores Trump's threats on defence provides a strong signal that it would also be unlikely to comply with US expropriation requests related to American gold stored in Canada.

Trump is a quick learner. But whether he can adjust his tactics fast enough to force a shift in Canadian policy remains an open question.

brenda
Reply
What a piece of crap story. Thank you for your shoddy journalism. Fake news at its best ...
(1)
Reply

Tim Gaynor
Reply
What's fake about anything in that story? The stuff about Gerald Ford sure was true. As was Trudeau' quiet Response to Trumps proposal. So what was fake?
Reply

Gerry H.
Reply
You need to watch "The Untold History of the United States" (e.g. on Netflix) and find out just how wrong you are.
Reply

Tim Gaynor
Reply
I've been writing President Trump daily suggesting that he bring all the troops home. Have them protect all the seaports and borders and close all military basis except Suez Canal. Invest the savings in the USA infrastructure of roads , bridges railroads electrical and communication grids. I'm 64 and sick of wars.
(1)
Reply

wlawlor
Reply
USA keeps Sea lanes open ?? Just what country is blocking or threatening to block sea lanes? A canard to expand hegemony for American corporate interests. Fascism is when govt and corporations are merged to the detriment of the commonweal. The 1% benefits from eternal conflicts while the people are given crumbs., Peace with the world is NEVER an objective. Enemies are fabricated for the benefit of the Tail who wags the big dog. We all know who the tail is.
Reply

John Doe
Reply
Meanwhile , back in the real world....
Reply

Anatoly Sturmanskii
Reply
Canada… the only country in the world to have marched on the capital of the US & burnt it to the ground.
Reply

John Boyd
Reply
The girly man leading Canada is a childish fool. He is Soros puppet who is running things behind the throne. Like his father before him, he is going to drive Canada farther into the ground. Canada's armed forces is a joke. I doubt that they can even protect Newfoundland. The whole mess will soon be falling on our heads and we will have only ourselves to blame.
Reply

John Galt III
Reply
I am so lucky Canada has a certifiable lunatic as Prime Minister. A Prime Minister who praised Fidel Castro as a brillinat leader - are you kidding me?. He is destroying his own country. I live on the US - Canada border and have waited for the right time to buy property in Canada. The perfect set of circumstances is 1) A Canada Property Bubble - check ( the worst in the enetire world 2) A Socialist PM who is a dunce - check 3) A Far Left Party in charge of destroying Alberta - check 4) Oil Prices that are in the toilet thus hurting Canadian exports and tax receipts (especially in Alberta where I want to buy) and finally 5) a Loonie going to, who knows, 60/65 cents on the dollar - maybe. It is all falling into place. Thank you Justin Trudeau and Rachel Notley, Premier of Alberta, You are insane.
Reply

allis chalmers
Reply
Trump is a smart business man which out maneuvers blind politics. Trudeau is a child in a toy store. You figure it out.
Reply
Leave a Comment