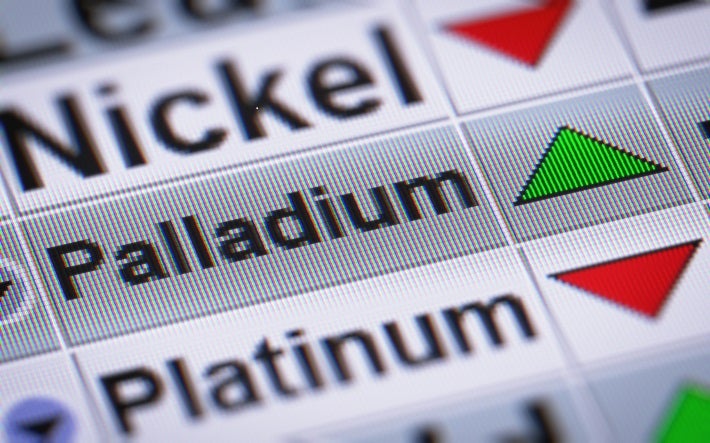 The price action in palladium is eerily reminiscent of early 2001, and this could have major implications for gold and silver in the months ahead.

Back in 2001, the price of palladium spiked to highs above $1100/ounce. At the time, major physical palladium shortages appeared and tremendous strain was put upon the LBMA palladium market in London. Lease rates soared, and it appeared that the LBMA was about to crack. Until, that is, the Russians (the world’s largest provider) were persuaded to ride to the rescue with a fresh supply of physical palladium.

But now, in 2018, palladium is all the way back and making new all-time highs. In fact, it’s up over 30% over just the past nine weeks! Most importantly, there are reports that lease rates for palladium in London are skyrocketing again, just as they did in 2000. Big thanks to David Jensen for all the work he has done on this subject.

The stress in London will invariably stretch over to New York, too. As you can see below, the Commitment of Traders structure for COMEX palladium is similar to what we’ve grown accustomed to in COMEX gold and silver, i.e. The Commercials are heavily net short while The Speculators are heavily net long.

So, now here’s where this is going to get interesting…

First of all, if the price rise is related to a physical supply squeeze again, do you think that the Russians will be persuaded to rescue the LBMA as they did in 2001? Perhaps the Yeltsin regime of 2001 was willing to play ball in this way, but I highly doubt that the Putin regime of 2018 will be as cooperative.

Next, though The Banks are able to manage and control the prices of gold and silver through their interventions on the COMEX, the market for COMEX palladium is tiny in comparison. This makes price easy to manipulate during COMEX hours, but the physical market through London dominates things for the rest of the day.

And so, let’s have some fun thinking about where this could all be headed.

That may be a lot to ask, and maybe The Bullion Banks will somehow manage another escape similar to 2001. However, the situation in palladium definitely requires the attention of gold and silver investors everywhere.

It has long been said that silver is the “Achilles’ Heel” of the current LBMA/COMEX fractional reserve pricing scheme. Perhaps palladium will end up being the surprise secret weapon instead. Only time will tell. Watch this all very closely in the weeks ahead.

Norman Wiedrick
Reply
You have LOADS of perception Craig,a little known attribute of prognosticators.Thank you so much.
Reply

Mike Lee
Reply
Hat's off to you Craig for reporting on Palladium , a subject totally overlooked. My personal nickname for palladium is " PUTIN's REVENGE". Can you imagine what would happen if Russia added any left over palladium ( they might be depleted of the left over inventory from Norsk Nickel ) to their national reserves? It could find it's true price point in a hurry. It is 50 times rarer than gold.
Reply
Leave a Comment