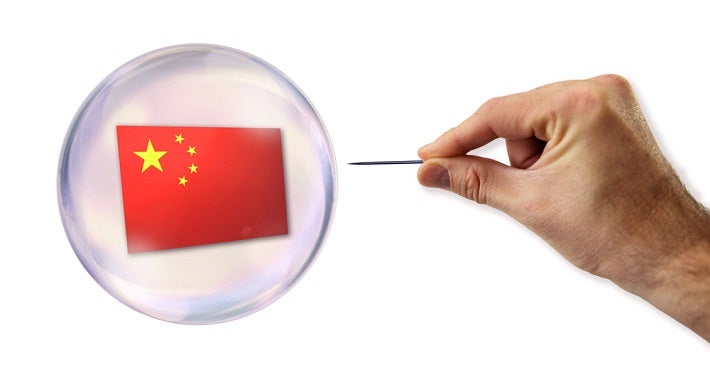 The recent surge in the US dollar has again brought massive selling in the emerging market currencies, most notably the Chinese yuan. This has occurred twice before in the past 15 months and each prior instance has foreshadowed a 10% drop in the S&P 500. Therefore, are we on the verge of another stock market correction?

We've been alluding to this in the podcasts of late and I've been meaning to write about it with some illustrative charts. However, the metals have been so volatile that I haven't had the opportunity. Today, with both gold and silver mostly flat on the session, I thought I'd seize the moment.

The problem for the Chinese is that the yuan is pegged to the US dollar. So, when the dollar strengthens...as it has for the past 60 days or so...the yuan strengthens, as well. The PBoC doesn't like this very much as it makes their exports more "expensive". It also creates a whole host of other issues, many of which are summed up in this excellent article I found at ZH last evening:

So, anyway, it's the ripple effect of the Chinese yuan devaluation that has my interest. First of all, here's a chart USDCNY chart that covers the last five years. Just like when the Japanese yen is portrayed by the USDJPY, a rising USDCNY means that the yuan is getting weaker versus the US dollar. Note that, even with the "peg" in place, the yuan has weakened by over 10% in the past three years.

Now let's drill in a little closer so that you can see where we're headed with this. On this weekly chart of the USDCNY, you can see four, specific periods of PBoC action to weaken the yuan in response to a surging dollar.

OK, so this is where it gets interesting. Check this weekly chart of the S&P 500. Be sure to note:

As you can see, there is a distinct, lagging correlation between devaluations in the yuan and corrections in the S&P. Perhaps, since the S&P was falling sharply before the US election, this yuan-related correction has already occurred? Perhaps the huge rally in stocks over the past five days will preclude any further decline? Perhaps.

However, if history is any guide, a soaring US dollar seems to put extreme stress on China and all emerging market currencies. In the past, this has led to liquidity shortages which have eventually bled into the US stock market. And the PBoC doesn't appear to be finished with this latest round of yuan devaluation. Below are the changes over just the past few days and check this new "warning" about all of this from the BIS: http://www.zerohedge.com/news/2016-11-15/vix-dead-according-bis-new-fear-indicator

Finally, as this site is dedicated to the precious metals and gold is often well-bid as a "safe haven" during periods of stock market selloffs, check this one last chart. Be sure to note the timing of the surges in the paper derivative gold price and note how they neatly coincide with the weakening yuan and falling equity markets.

With stock market bullishness at extreme levels and the gold permabears out in force, a sharp rally in gold from here would certainly catch almost everyone by surprise. So, could a rally be coming on the days ahead? Perhaps you should just keep your eyes focused upon the yuan. It may once again be foreshadowing what is to come next.

Just something to consider.

9lbHammer
Reply
How's that deluded death-of-the-dollar and TEOTKE nonsense been working out for you? You just keep making it up as you go along and hope no one remembers nonsense like this idiotic prediction or calls you out on it. Your credibility, if you ever had any, is completely shot and on par with Jim Kramers obvious clownish approach. ~~~~~~~~~~~~~~~~~~~~~~~~ "So, summing up, what should we expect going forward: Further choppy to downward price action into late next week. It's still possible that gold could trade as low as $1285 and back near its 50-day moving average before bottoming. This area has proven as support all year. A renewed rally in August back to near, but likely not exceeding much, the highs of late June and early July. Something between $1370 and $1390. Talk will begin to spread that gold has seen a "double top". Another tumble in mid-late September as the next front and delivery month (October) comes off the board, However, October is never a big volume or big "delivery" month. Instead, most of the action after August typically shifts into the December contract. Therefore, following the 2016 pattern, any dropoff in September should be more shallow than what we're seeing at present. Then, finally, a breakout to new 2016 highs in October and November. This year-end rally should take gold all the way back to near the April 2013 manipulated breakdown level of $1525. Let's call it $1475-$1525. So there you go. That's what we expect. If I'm proven correct, I'll gladly take all the adulation that comes this way. If we're wrong...well, I'm not eating my hat again. That almost killed me last time." ~~~~~~~~~~~~~~ http://www.pmaccountability.com/ ~~~~~~~~~~~~~~ “One of the saddest lessons of history is this: If we’ve been bamboozled long enough, we tend to reject any evidence of the bamboozle. We’re no longer interested in finding out the truth. The bamboozle has captured us. It’s simply too painful to acknowledge, even to ourselves, that we’ve been taken. Once you give a charlatan power over you, you almost never get it back.” ~~~~~~~~~~~~~ Carl Sagan
Reply
Leave a Comment